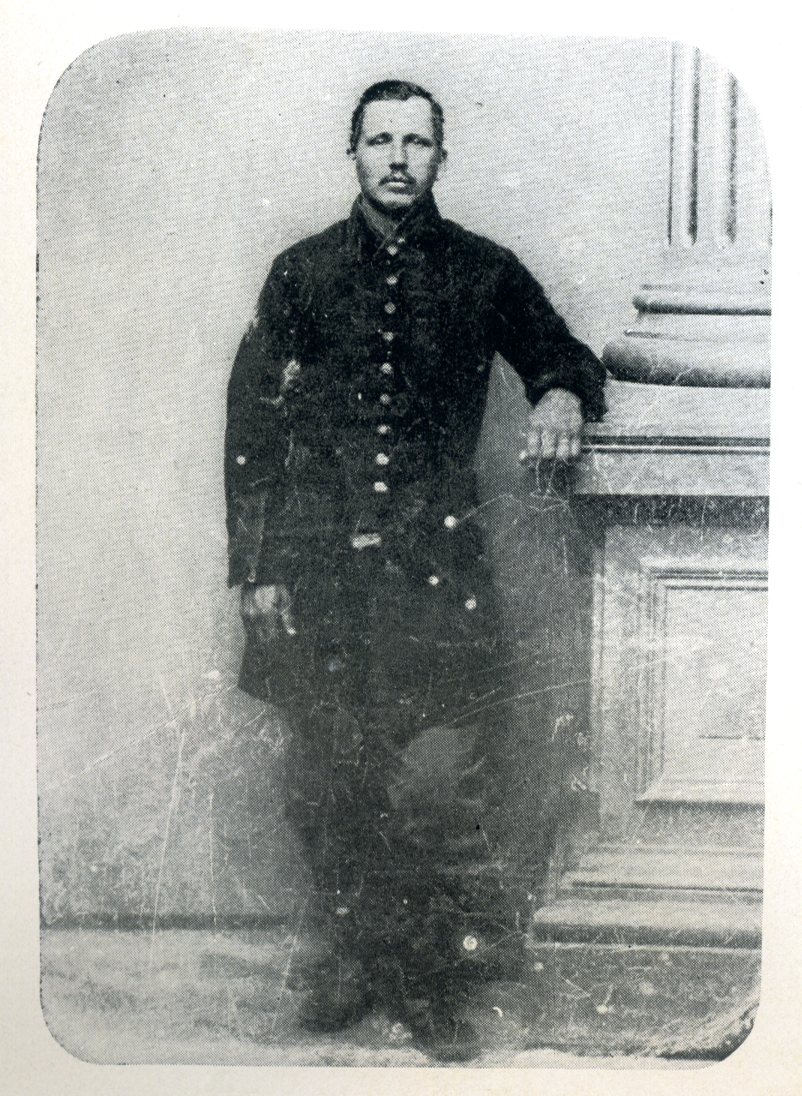 ELI H. RICHARDSON volunteered from the town of Swanton about August 25th, 1862, and joined Highgate company on the day of its organization, took an active part in the organization of the company, and was much interested in the selection of company officers. Was at this time 35 years of age, a married man, and occupation carpenter and millwright. He was born and brought up in Fairfax, Vt., and married Miss Lucia A. Lowell of Fairfax, in 1855, and moved to Swanton in 1856. He was a rugged and powerfully built man, vigorous and active at the time of his enlistment, five feet seven inches tall, gray eyes and brown hair, a man of very correct habits, a devoted Christian and an honorable and active member of the Methodist Episcopal Church. Likely no man in Company K more tenaciously held to and openly maintained his religious convictions and the tenets of his church than Comrade Richardson. He was strictly honest and conscientious, and practiced the Golden Rule in the army as at home, and could not see any reason for loosening moral obligations while a soldier. He was inclined to be taciturn and only rebuked his careless comrades by his upright and straightforward conduct. He taught by example rather than precept.

In his tent the morning and evening prayer was observed, and due attention was given to the customary prayer meeting of his church in different tents, by regular appointments. There were quite a number of the same church In Company K, and in the regiment who co-operated with him in maintaining religious service in the camp. He was a faithful soldier, and a most zealous' patriot, and would not favor wax only as the last resort to overthrow a great wrong and maintain government, when assailed by foes within or without. He believed that slavery of the colored man was a most wicked institution, and a disgraceful stain on our otherwise humane and magnificent government, and had in early manhood devoutly dedicated his life in the service of his master in the work of human freedom and equality. He, like many others, freely volunteered responding to the behest of strong convictions. He would not be swerved a hair's breadth from the dictates of his well educated and trained conscience, such was Comrade Richardson.

His health was generally good and seldom absent from roll call, or asked to be excused from duty. He contracted a severe cold at Wolf Run Shoals, and was laid up with jaundice at Camp Occoquan or Carusi. He was quite sick for a number of weeks, but remained in his tent, and there was attended by the surgeon and cared for by his tentmates. He recovered and marched with his regiment to Gettysburg and courageously did his duty during that severe battle. He was wounded by a piece of shell on the counter charge against General Pickett's serried columns, though not seriously, and did not leave the field until the fighting was over. He carried his arm in a cling for a few days, and followed with his regiment in the pursuit of General Lee's retreating army, until July 9th, when by reason of expiration of term of service, the regiment was detached and sent home by way of Baltimore, New York, New Haven and to Brattleboro, Vt., where Comrade Richardson was mustered out with his regiment, July 21st, 1863. None were more thankful than he, because a soldier in the army during the time of two of the most important events of modern history, namely. President Lincoln's proclamation of emancipation, and the great battle of Gettysburg.

Comrade Richardson returned home to Swanton, resumed his occupation and place in society. For a number of years he manufactured and dealt in furniture. Disease contracted in the service and injuries received at Gettysburg developed into catarrhal consumption, which caused his death, March 20th, 1882, A modest headstone marks the place where we laid him in Church Street cemetery, Swanton, Vt., and on each recurring Memorial Day his surviving comrades raise the Stars and Stripes above his grave as a token of love and affection and respect, for a brave and devoted soldier of the Republic. His widow with an adopted married daughter occupies the old home and still mourn the loss that so deeply saddened their hearts. From the date of Comrade Richardson's enlistment to the day of his death I saw him almost daily, and knew him well, and I know that I have but feebly spoken of his exemplary life and conduct. On page 415 will be seen his face as a soldier in 1862.