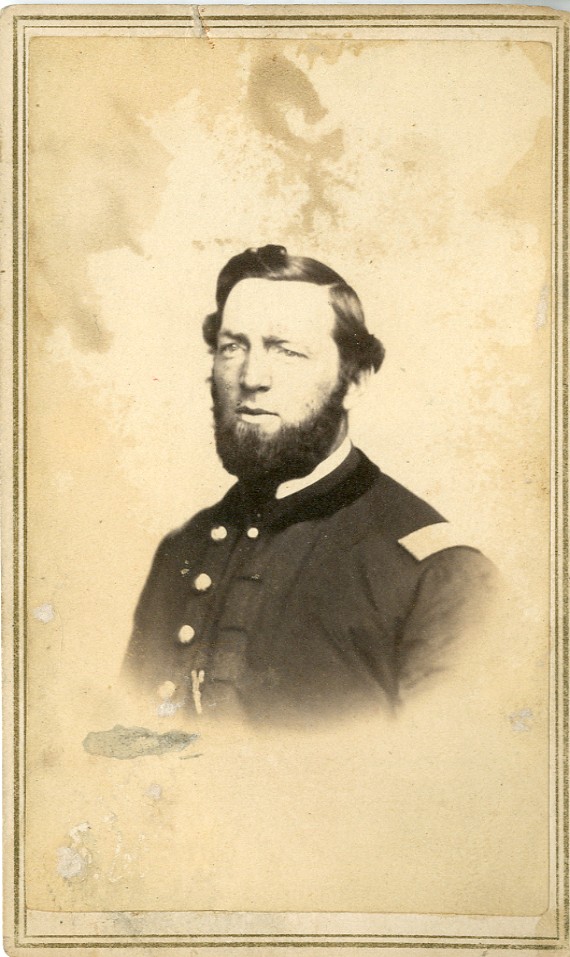 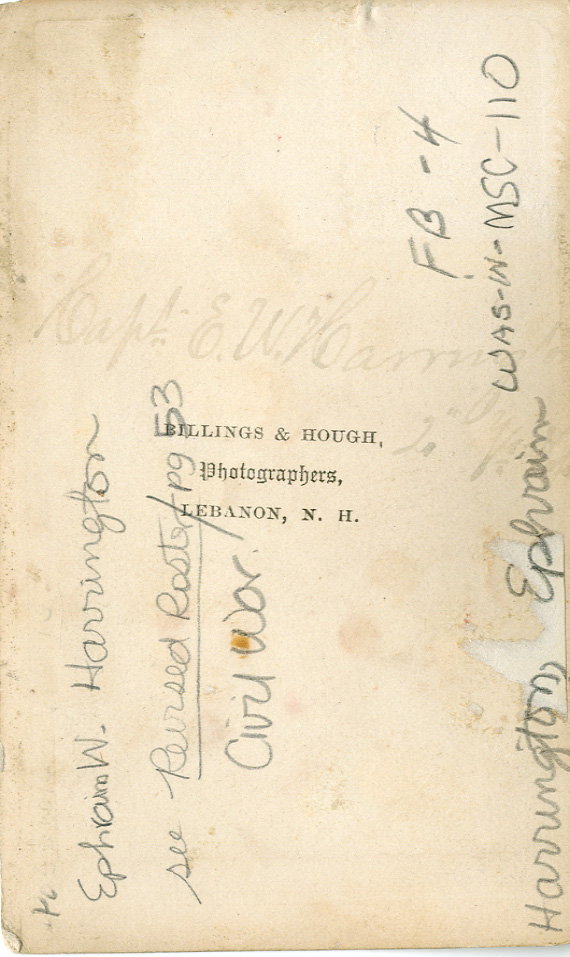 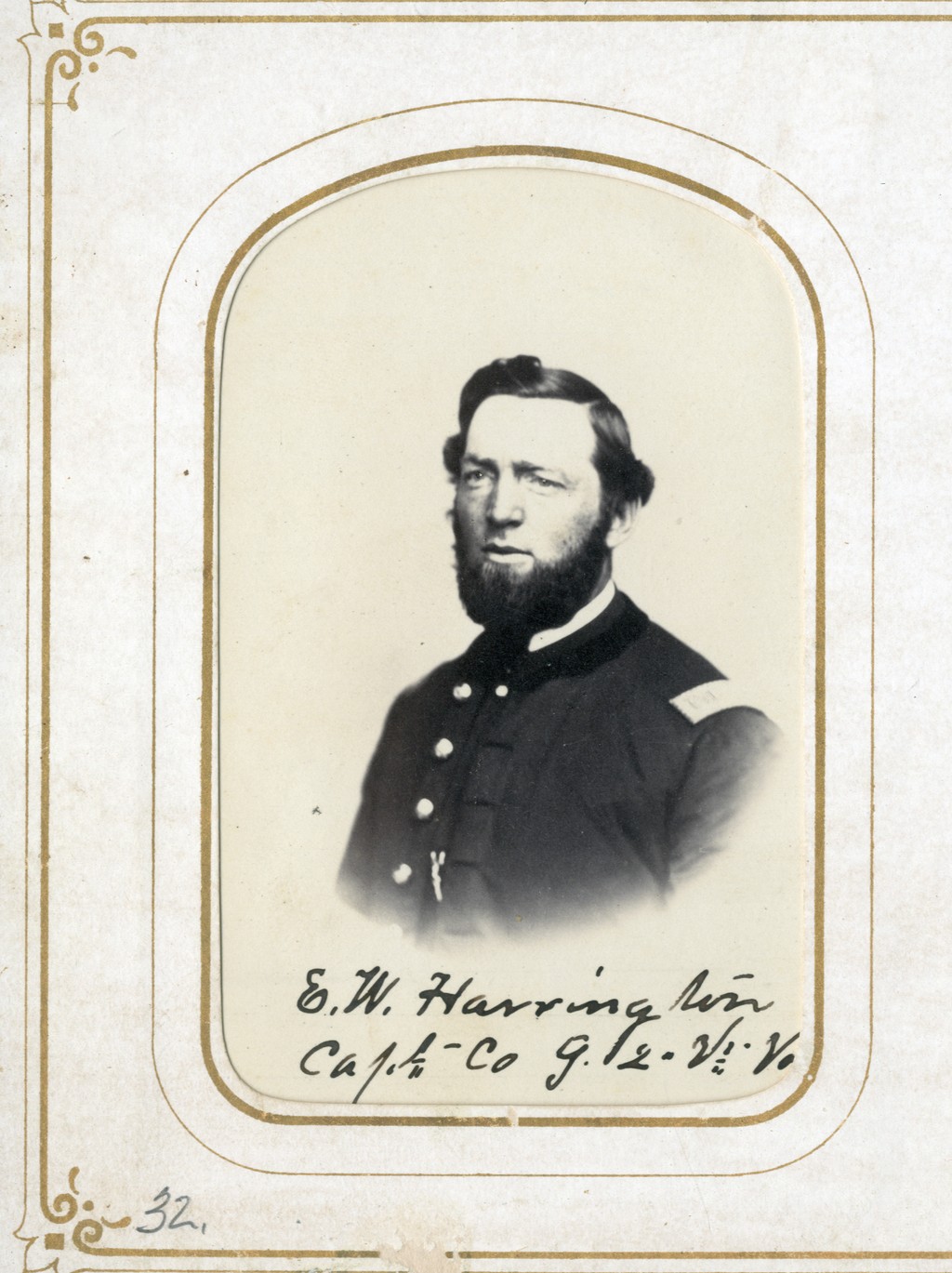 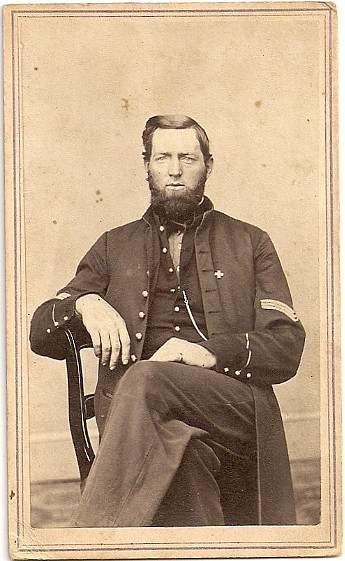 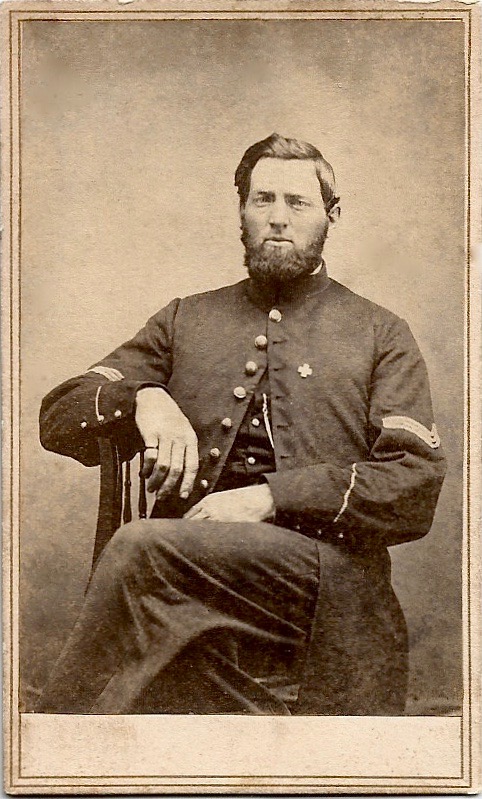 A Remarkable Vermont Soldier of the Civil War

Brevet Major Ephraim Wood Harrington died at his home, 92 North avenue, Attleboro, Mass., Monday Oct. 26 and was buried in the family lot in Grove cemetery, East st., St. Johnsbury the following Thursday. The formal funeral was held at his home at Attleboro and an informal interment at the grave, conducted by Rev. Mr. Moody, pastor of the South church, St. Johnsbury

Maj. Harrington was the son of Levi and Ruth Wood Harrington of Kirby and was born in Waterford, Jan 16, 1833, and therefore lived to the ripe old age of nearly 82 years

He leaves a widow and two grand children. His widow is a daughter of the late Dr. George C. Wheeler, who practiced medicine many years at East St. Johnsbury and a sister of the late Mrs. G. B. Bullard, who died about 1878. All among the old residents of St. Johnsbury

Maj. Harrington enlisted as a private in Co. G of the 2nd Vt. Regt. Early in May, 1861 and the first three years regiment to go from Vermont. " In its original composition the Second was a picked regiment, the companies being selected by Adjutant General Baxter from about sixty companies which tendered their services to the state for the war in the early days of May, 1861. " (Vt. in the Civil War, benedict, Vol. I, p. 12)

The Second regiment was mustered into the service of the United States June 20 following, and was then reviewed by Gov. Erastus Fairbanks who presented it with a U. S. Standard which was "placed in the hands of Color Sergeant Ephraim Harrington of Co. G, a man of gigantic stature, measuring six feet and four inches in his stockings, by whom it was bravely borne for two years. "

After passing the regiment flag to the hands of another bearer, Harrington was successively promoted from color sergeant to 2nd and 1st lieutenant and captain. Before the expiration of his first service, he reenlisted for a second term, and at the close of the war he was commissioned a brevet major, for gallant and meritorious conduct

Maj. Harrington was never wounded, not even during his unusually long service as color sergeant, and yet he was never absent from his command, except for a short time in hospital. He participated in all the 28 battles in which his regiment was engaged from the 1st Bull Run, July 21, 1861, to Sailor's Creek, April 6, 1865

May the Hero Rest in Peace.