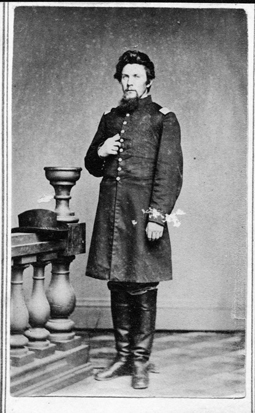 Kittredge Haskins was born in Dover, Vermont, 8 April, 1836, son of Asaph and Amelia (Ward) Haskins). He was educated in the common schools and under private tutors. He married in 1860, Esther Maria Childs of Wilmington, Vermont. They had one son who died at age three years. Mr. Haskins was admitted to the Windham County Bar 14 April, 1858, and practiced law for the rest of his life in one capacity or another, and was justice of the peace.

On 23 Aug., 1862, Mr. Kittredge enlisted for service. He was commissioned 1st lieutenant 20 Sept., 1862. He resigned on account of disabilities he incurred 19 March, 1863. He was appointed Post Adjutant to Colonel E. H. Stoughton, brigade commander. Haskins also served at one time as acting adjutant of the regiment and acting quartermaster. He was appointed aide-de-camp with the rank of Colonel by Governor Peter T. Washburn in 1869. He was the States Attorney for Windham County from 1871-2. Kittredge represented the town of Brattleboro in the Vermont Legislature from 1872-3, 1896-7, and again 1898-9. He served as Windham County state senator 1892-3. He was speaker of the House at the war session held May, 1898, and at the regular session Oct., 1898. and was appointed the United States Attorney for the District of Vermont and served from Oct., 1880 - July, 1887.

He was elected to Congress from the Second Congressional District in 1900 and continued until 4 March, 1909. Congressman Haskins was an Episcopalian who served his the St. Michael's Church in Brattleboro as vestryman and warden for nearly 50 years. He was made Master Mason May, 1857, and was a member of all York and Scottish Rite bodies, having received the 33d degree.

Was Former Vermont Congressman And One of The State's Best Known Men - Died In Brattleboro Home.

Had Also Served As Postmaster -

Death was Due To Kidney Disease -

Brattleboro, Aug. 7. - Colonel Kittredge Haskins, aged 80 years, former congressman and postmaster, died at his home here this morning after a month's illness with kidney disease. He was taken ill while attending the Episcopal diocesan convention in Montpelier and his condition had been critical ever since that time.

Colonel Haskins was born in Dover, April 8, 1836, the son of Asaph and Amelia (Ward) Haskins, and was educated at common schools and by private tutor. He became one of the prominent lawyers of Vermont and had resided in Brattleboro since 1863. He was elected to congress in 1900 and served four terms. He was postmaster of Brattleboro for four years after January, 1911. Colonel Haskins was a prominent Episcopalian and attended the general conventions of that church in Chicago, New York and Baltimore. He had been master of the grand lodge of Masons and was one of the few Vermonters to receive the 33d degree, the highest degree in the Scottish rite branch. He leaves his wife, who was Maud A. Elmore, of Dorchester, Mass.

He enlisted in Company I, 16th regiment, Vermont Infantry in the Civil War, and was commissioned first lieutenant. He resigned the following year because of disabilities sustained March 19,1863. He was appointed to the staff of Governor Peter T. Washburn in 1869.

Among the minor offices he had held were: Town representative, state senator, speaker of the Vermont house and justice of the peace.