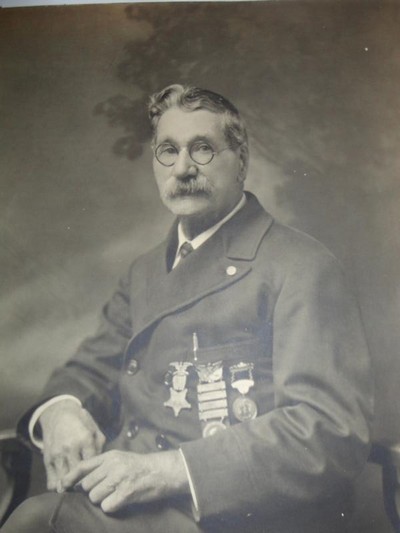 John R. Sears Served in Connecticut and Vermont Regiments and Was Wounded in Action.

Greenfield, July 26 - The rapidly thinning ranks of those who fought in the Civil war were reduced again today, when John R. Sears, 97, Greenfield's only surviving veteran of the war between the states, died at his home, 26 Beech street. The only other Franklin county veterans of the days of Gettysburg and Shiloh are Walter Hover of Orange and James Coughlin of Ashfield.

Mr. Sears, who was the last commander of Day post, G.A.R., had been in poor health for several months, though he was able to watch the recent V.F.W. state encampment parade from a wheel chair at Grove and Wells streets. His final illness came when he contracted pneumonia two weeks ago.

The veteran campaigner had lived here since the close of the Civil war in 1865. In recent years, he had been honorary marshall at all Memorial day exercises, but for the past two years he had been unable to attend. He was a member of Greenfield lodge of Elks and Galvin council, Knights of Columbus, and was an honorary member of Calvin post, American Legion, Field Camp, United States Spanish War Veterans, and Moulton camp, Sons of Union Veterans.

Born in Ireland on August 15, 1843, the son of Robert and Elizabeth Sears, he came to this country with his parents when he was three years old. The family lived first at Lowell and Concord, N.H., and later moved to Brattleboro, Vt.

When the civil war broke out, Mr. Sears enlisted at the age of 17 in the 1st Connecticut cavalry, and served four months as a first lieutenant before the governor of Vermont, at the request of his parents, intervened and obtained his discharge because of his youth. A year later, however, he enlisted again this time with the 11th Vermont volunteers. He was wounded three times at the battle of Spottsylvania, and saw service at the battles of Cold Harbor, Reeme's Station, Fisher's Hill, Cedar Creek, Winchester, Manassas Gap, Petersburg, and Richmond.

After Appomattox, he was discharged at Burlington, Vt., on his 22nd birthday, and soon after came to Greenfield where he married the former Elizabeth H. Cosgriff. He was a farmer for several years, worked for some time for a local coal dealer, and then became a stone mason, a trade he followed until his retirement in 1923.

Surviving are two daughters, Miss Anne Sears, with whom he made his home, and Mrs. David Corcoran of Belmont; 11 granddaughters, six great-grandsons, and many nieces and nephews. The funeral will be Monday at 9 a.m., with a requiem mass at Holy Trinity church to be followed by burial in Calvary cemetery. The Greenfield patriotic societies are planning public participation in the funeral.