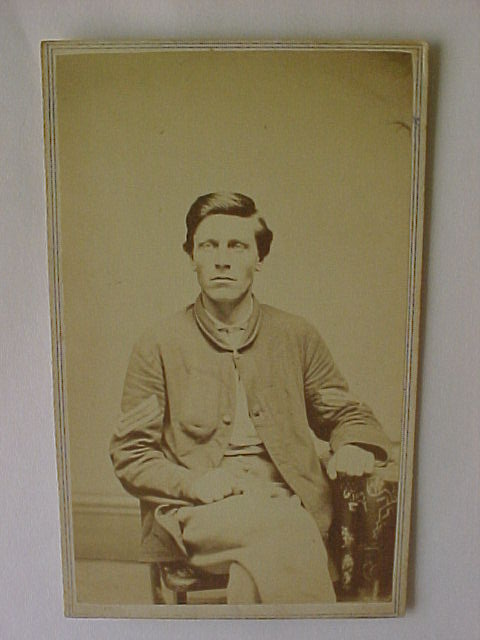 Shores, Ethan Prescott, of Granby, son of Levi P. and Sarah (Prescott) Shores, was born in Victory, Feb. 7, 1842. His father who still survives was one of the early settlers of the town and Ethan was from boyhood inured to hardship and privation, but this severe training developed Herculean frame and iron constitution.

He remained at home till the age of nineteen, dividing his attention between labor and such schooling as in rare intervals he could obtain, but when the Rebellion came he resolved to devote that strength and manhood to the service of his country. He enlisted in Co. K, 8th Regt. Vt. Vols., and remained with it during the entire time of service, except thirty days which he spent in the hospital recovering from a wound, which he had received in action.

At the battle of Cedar Creek, the colors of the regiment were nearly captured, for the standard bearer had been shot and the regiment was in full retreat. Shores seized them, but too late, and with one comrade was cut off and surrounded by the enemy, who demanded the immediate surrender of the flag. He shot one and bayonetted another of the rebels, while his comrade likewise stretched still another on the field, then breaking through the ranks around them, they rejoined their regiment which had formed in battle line a short distance in the rear. Here Sergeant Shores delivered the colors to the proper officer, who in five minutes was shot dead, and then their former brave defender bore them throughout the remainder of that bloody fight.

At another time, though severely wounded and made prisoner, he contrived to break from his guards and after two nights and three days of weary travel and perilous adventure, reached the Union lines. After more than three years of brave and constant service he received an honorable discharge.

Mr. Shores settled upon the farm which he now occupies, then but an uncleared lot, and has devoted that energy and courage so signally displayed upon the tented field to the subjugation of the virgin soil.

He was wedded, Feb. 7, 1867, to Susan Maria, daughter of Charles and Harriet (Silsby) Gleason. Their union has been blessed with four children: Etta E., Elwin P., Winifred J., and Maud E.

Mr. Shores has been appointed to many posts of honor and influence, and was selected to represent the town of Granby in the Legislatures of 1876 and 1878. He is a prominent member and has been W. C. T. in the Granby Lodge of I. O. G. T.

He is blunt and outspoken, of strong convictions and prejudices, but with his heart in the right place, he is always to be found on the side of temperance and right living.

See also a photograph and a different biography, of Ethan, as well as his brother Pascal.