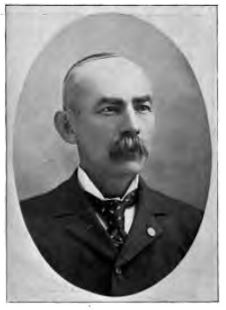 W. H. H. SLACK, son of John A. and Mary (McAllister) Slack, was b. Feb. 21, 1844. After attending the district schools he finished his education at Springfield Wesleyan Seminary. His boyhood was spent on his father's farm. At the age of eighteen he enlisted in Co. E, 16th Reg't Vermont Volunteers, and was mastered out in the fall of 1863. Previous to his enlistment he had commenced to learn the trade of machinist with his father, who was then engaged with Parks & Woolson, and on returning from the war he continued his trade and remained in the employ of the company until 1871. At this time he began, at his present location, the manufacture of shoddy and flocks, and has successfully continued the business to the present time (1894).

Mr. Slack has also been connected with many of the other successful enterprises of the town. He has always taken great interest in all that pertains to the prosperity and advancement of his native place. He was the first commander of Jarvis Post, No. 43, G.A.R., and has been honored with appointments from two national commanders of the order; was aide-de-camp with the rank of colonel on Major William Warner's staff, and assistant inspector general of Col. Wheelock Veazey's staff. In politics Mr. Slack has always been a worker in the Republican ranks, and has been called by his fellow citizens to positions of trust; was the representative of Springfield in the Legislature of 1888, and chairman of the committee on military affairs during that session. He was aide-de-camp on the staff of Gov. Carroll S. Page in 1890.

W. H. H. Slack of Springfield died at his home Sunday afternoon after week's illness with pneumonia. Mr. Slack was born in Springfield, February 21, 1844, the son of John A. and Mary Ann McAllister Slack. His early education was received in the common schools of the village and in Springfield seminary. At the age of 16 Mr. Slack went to work in the machine shop of Clark & Woolson to learn the trade which he followed for a short time. With the Civil war, Mr. Slack enlisted as a private in the 16th Vermont regiment, Co. E. for a term of nine months, which regiment participated in the three days' battle of Gettysburg and was mustered out in August 16, 1863, at Brattleboro.

On returning to civil life he again took up his trade as machinist and in 1871 with F. G. Ellison engaged in the manufacturing of shoddy. This association continued for four years and later he took into partnership his brother, John T. Slack. The business has grown to be the largest in the country if not the world.

Mr. Slack held many town offices and in 1880 was elected to the Legislature and in 1890 to the Senate. He served as aide-de-camp with the rank of colonel on the staff of Gov. C. S. Page, was a member of Jarvis post, G.A.R., of which he was first commander. He was a member of St. John's Lodge, F. A. and A. M.

Mr. Slack married Anna M. Corbett of Springfield, by whom he is survived, also by four children, H. Carlton Slack, of Boston, Walter W. Slack, J. Milton Slack and Mrs. Joseph Johnson, all of Springfield, and by two sisters, Mrs. Russell Herrick of Springfield, and a brother, John T. Slack, and a sister, Mrs. F. E. Way who are passing the winter in the south.