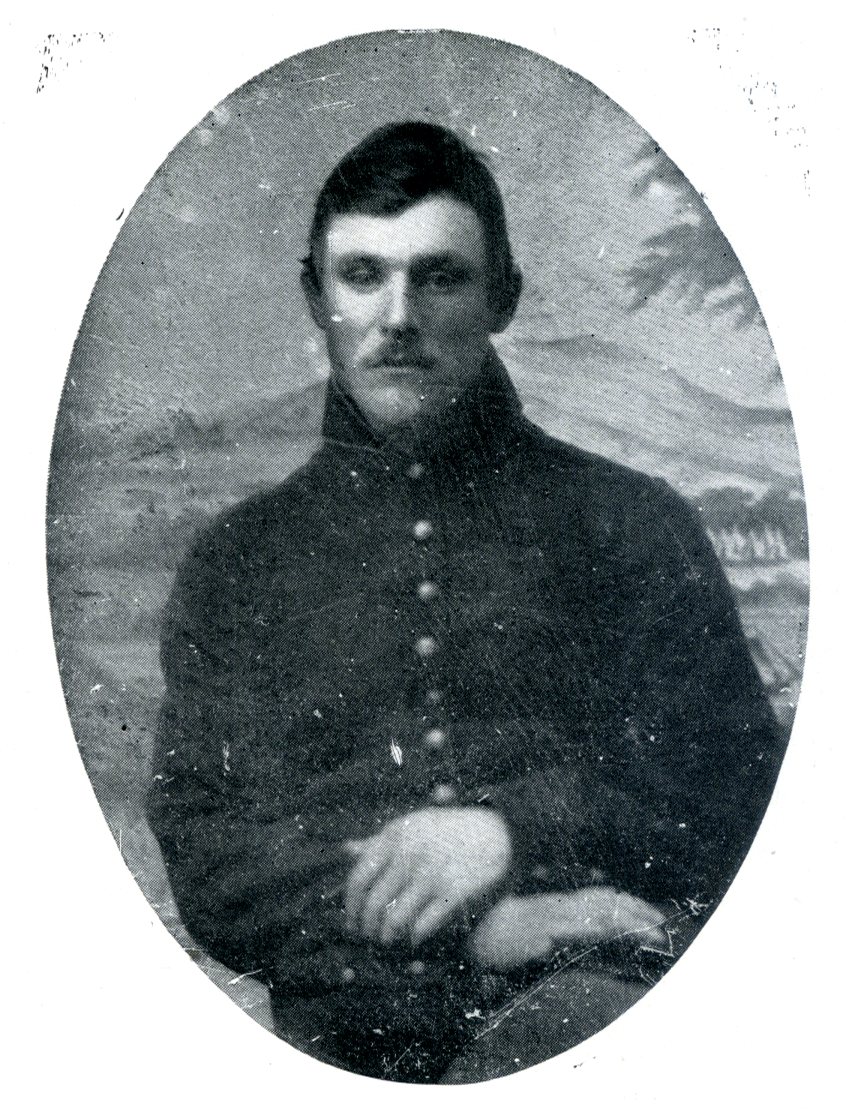 I was born in Poultney, Vt., in 1834; volunteered on the second day of September, 1862, and counted on the quota of the town of Stowe. My occupation at the time was farming. My education was in the district schools of Vermont. I was 5 feet, 6 inches tall, light complexion, blue eyes and brown hair, quite vigorous, healthy and strong and adapted for soldier life. Was present at the organization of Company E at Morrisville, and here we drilled for three weeks under Urban Woodbury, a returned soldier, who had lost an arm in the first battle of Bull Run, July, 1861. We received orders to go to Brattleboro for muster into the United States service. We elected officers about September 8, and Joseph J. Boynton was chosen captain; Andrew J. Davis, first lieutenant, and Frank Kenfield, second lieutenant, all good men and true. Mustered in October 10th, and started for Washington on the 11th. I followed the fortunes of my Company and regiment in camp, on the picket line and on the march, always on hand and doing duty as well as I could. One day my comrade on the picket line made ready his meagre breakfast — all that he had — stubbed his toe and spilled It, but quickly scraped it up and down it went dirt and all, and such incidents frequently happened, a true soldier soon adapted himself to such trifles. My tentmates were Sergeant Orlo S. Judson of Stowe, Corporal Joseph S. Collins and Amos Towne. At Camp Widow Violet so many sick for a time Surgeon Nichols had an extra tent put up and I did duty in it for a while until taken sick myself. About June 20th was better and up about camp. We broke camp June 25th and started on the great march. The sick had been sent a few days before to Alexandria and Washington. I was sick enough to go, but there was no room. So on that day was detailed as guard of the wagon train. The Quartermaster saw my condition and said, "Pile on to the wagon when tired; march when you can," and thus it was march until tired out and then ride till rested and in this way reached Gettysburg. I went through the battle and with my company and came out without a scratch, but was ruptured in helping roll Colonel Randall's horse off that was shot and fell on his foot and leg. The Colonel jumped up and exclaimed, "Damn them, they did not get me that time," Since the war I have lived in Stowe for a while; followed farming and then moved to New Hampshire, where I now reside and have for the last 15 years. I have a little home in Warren. I am not able to do much work; failing every day; am. now 65, and if it was not for the pension of $16 per month could not get along. I am thankful I served my country for now when old and feeble am being well cared for and more, in a measure discharged the duties that impelled me to volunteer. Warren, N. H., March 17, 1902.
See page 262 for Henry A. Sparks' picture.

Death of Henry A. Sparks

Henry A. Sparks, 89, on July 31, and one of the oldest residents, died at 6:30 o'clock Wednesday morning of last week at the home of his son-in-law, Mr. and Mrs. Jerome B. Ayers, on the Barrows road where he had made his home for 17 years. Mr. Sparks was a veteran of the Civil war, enlisting and serving nine months in Company E, 13th Vermont Regiment, and taking part in the battle of Gettysburg. He was a past commander of the H. H. Smith Post G.A.R., attending the meeting of the Post until they ceased. He leaves two daughters, Mrs. Ayers and Mrs. A. C. Sulham of Morrisville, a sister, Miss Mercyline Sparks of Quincy, N.H., six grandchildren, Mrs. H. L. Moulton, Mrs. Inez Hosmer, Herbert, Donald, Chester and Wayne Ayers, and six great-grandchildren. The funeral was held at the Ayers' home at three o'clock Thursday afternoon. The body was taken Friday to Warren for burial.

Mrs. A.C. Sulhlam or Morrisville, Mrs. J. B. Ayers and son, Donald, accompanied the remains of Henry A. Sparks Friday to Warren, N.H., where the burial was made. The funeral was held Thursday afternoon at the home of Mr. and Mrs. Ayers, where Mr. Sparks died early Wednesday. The Rev. C. E. Hayward conducted the service. Among those present were Commander S. C. Spaulding, S. M. Brush and Louis Shonelli of the H. H. Smith Post, G.A.R., and members of the W.R.C. attended in a body.