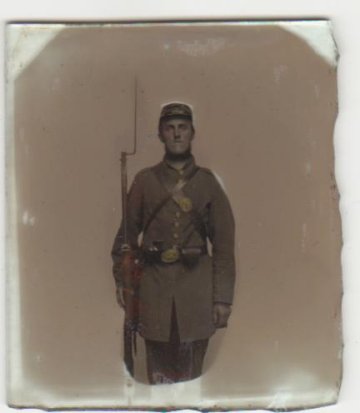 Veteran Who Was Confederate Prisoner Nearly a Year.

Bradford p. Sparrow, whose death Wednesday morning of paralysis at the Soldiers' Home was briefly announced in the Banner was born in Calais April 8, 1843, one of four brothers, the others being Hiram, now living in Calais, Irving, for many years proprietor of a livery stable in Montpelier, Albert, proprietor of the Montpelier House. He never married; was a graduate of Middlebury College, and at one time practiced law. His body was taken to Montpelier for burial.

He lived for several years on a farm many lines from Fredericksburg, Va., and while there met with an accident which finally resulted in paralysis. He went to the National Soldiers' Home in Hampton, Va., whence he was taken to his brother's hotel in Montpelier, coming to the Home here Dec. 2,1918. During his stay here he was entirely helpless requiring constant care. His mental faculties seemed unimpaired though his vocal organs were so much affected that it was with difficulty he could be understood.

Mr. Sparrow received his education in the common schools until twenty years of age. At twenty-three he continued study at the Washington county grammar school, under Prof. D. D. Gorham, at the same time teaching in the vicinity and acting as messenger at the state library during two sessions of the Legislature, to obtain the means. Having been drafted from the town of Elmore, July 17, 1863, military service postponed a continuance of his studies during the intervening period. At Middlebury College he obtained a scholarship and graduated with the class of 1874. In the same year he entered Columbian Law School, graduating in 1876.

Mr. Sparrow's experience in the army and southern prisons greatly injured his health and interfered with his life's plan. Joining Co. K, 4th Vt. Vols., at the age of twenty years, he passed two years in the field and was discharged from McDougall Hospital in New York harbor June 17, 1865, as unfit for service. He participated in all the engagements of his regiment while a member of it, including the battles of the Wilderness; and on the 23d of June, 1864, with 2, 000 of his comrades was captured near Petersburg, Va., and hurried through Richmond and Belle Isle to Andersonville prison in Georgia. Here he remained until April 18, 1865, when he was exchanged and delivered to Union officers near Jacksonville, Fla., so emaciated and weak as to be unable to march, barely escaping with his life after a captivity of over ten months.

In July, 1876, he became the assistant clerk of the Supreme Court of the District of Columbia, performing the duties of clerk for the criminal department of the court until 1880, when considerations of health made it advisable to exchange city for country life. In 1882 he purchased a tract of land in Caroline county, Virginia, and engaged in lumbering and farming operations. He is now an enthusiastic Virginian, in love with its climate and resources.