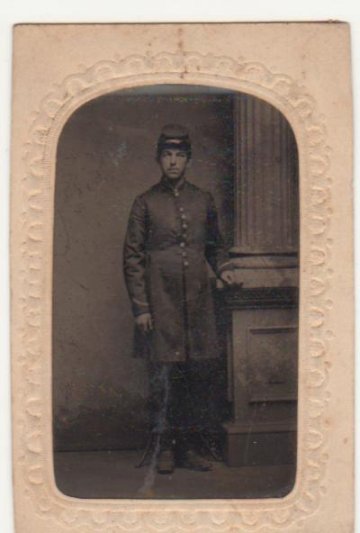 A private telegram announces the death of George Stebbins, Co. D, 12th Vermont Regiment, at Camp Wolf Run Shoals, on the 6th inst. His remains will be forwarded to Williamstown for interment, where resides a mother who was dependent upon him for her support. In the loss of a dutiful, much loved and only son, may she through grace, receive that consolation and strength which shall accord "to her day."

Death of a Good Boy, - George Stebbins, of Williamstown, son of Mehitable Stebbins, died in camp near Wolf Run Shoals, of typhoid fever, April 10th, aged 18 years. He was a member of the 12th Vermont regiment. Letters from his officers give him an excellent character, both as a soldier and a man, and hi last letter to his mother is a noble one, in the spirit of a true christian. Having seen no less than eight letters from officers and comrades to Mrs. S. During George’s sickness and after his death, we should be unjust to them did we not commend their care and kindness for the young soldier and his afflicted mother.

The funeral of George Stebbins, late of Co. D, 12th Vermont Regiment, will be attended in Williamstown on Sunday, July 26th, Elder Sargeant of Washington officiating. His comrades in arms, having returned home, will be in attendance.