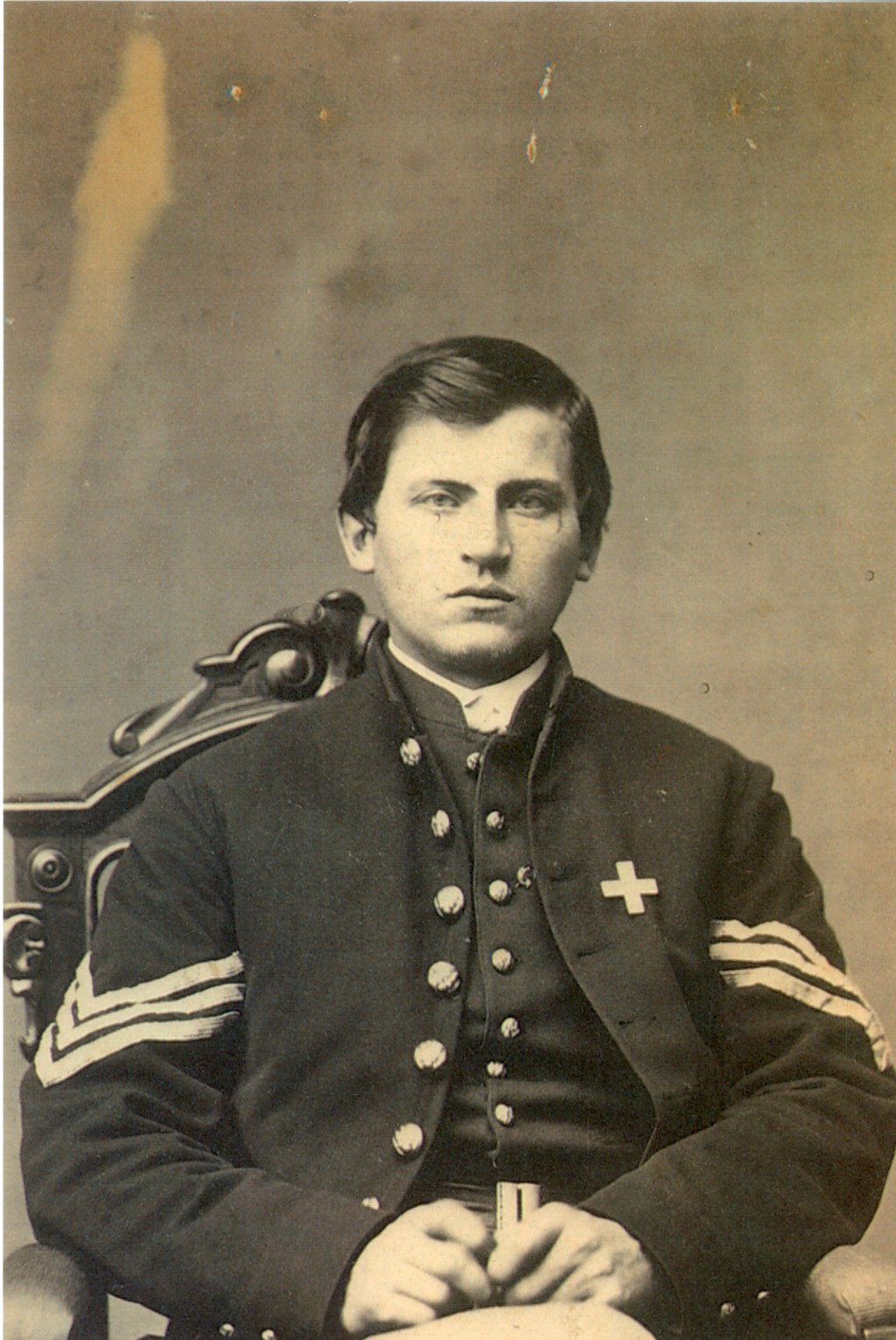 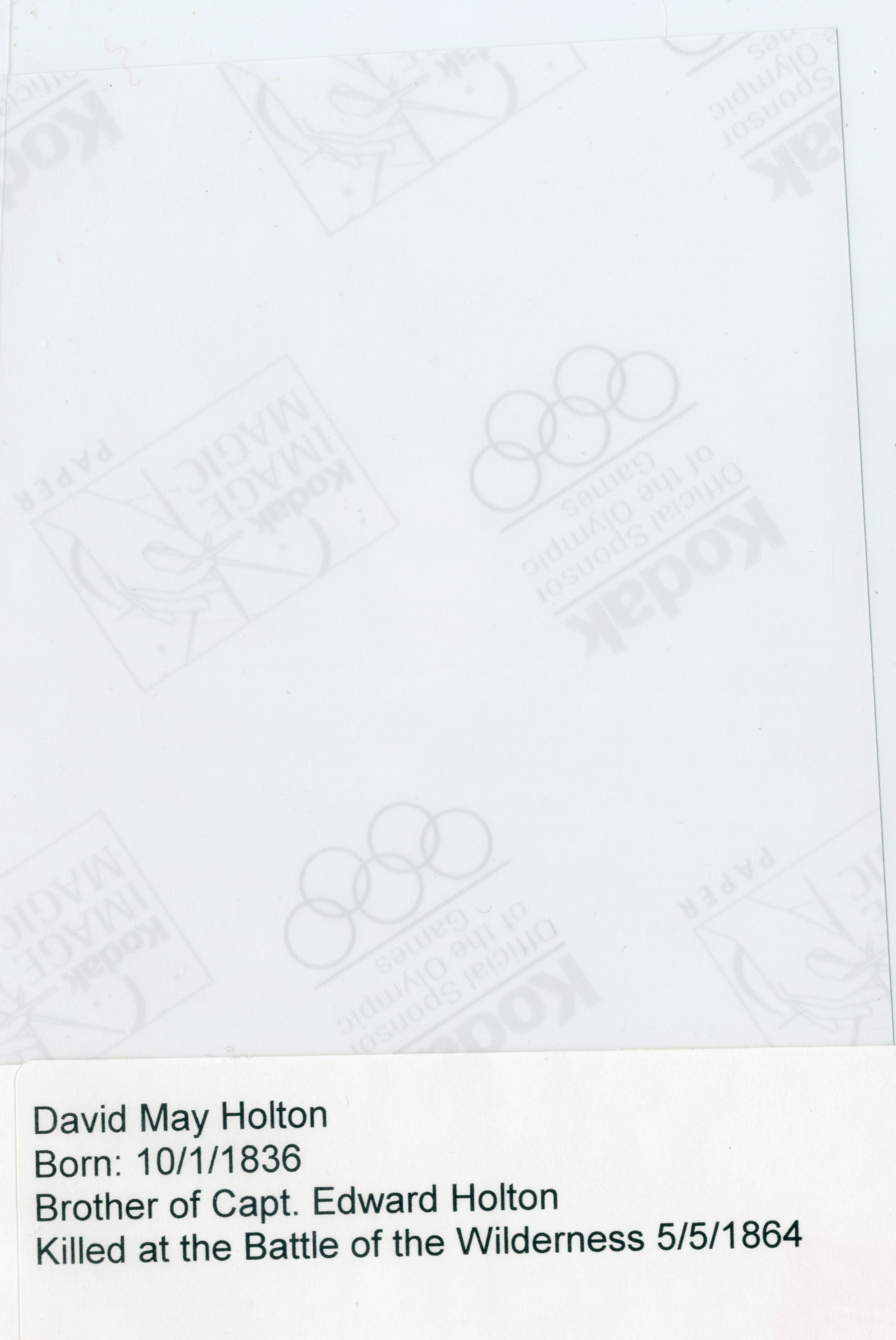 Not a few of the rank and file and of the non-commissioned officers in the army of the Union, who lie buried in nameless graves, if buried at all, and have no mention made of them in the papers except as their names appear in the list of "killed," are men whose death is a much greater loss to the country than the death of David M. Holton of Williston, Sergeant in Co. I, 6th Vermont Volunteers, who fell in the battle of the Wilderness, 5 May 1864.

He was born in Westminster, Vt., 1 Oct. 1836, the son of Erastus A. and Hannah (May) Holton. His paternal ancestry was traceable back for two hundred years, to William Holton, one of the founders of Hartford, Ct., and Northampton, Mass. On the mother’s side, he was connected with the ancient and highly respectable May family of Haddam, Ct., branches of which emigrated to Putney and Westminster at an early day. His father was actively and extensively engaged in business, but David, by the passionate love for books which he manifested in childhood and youth, made it evident that literature rather than business was to be the employment of his life.

Having made thorough preparations for College, he entered the Sophomore Class at Williamstown in 1856, and was graduated in 1859. By the death of his father and the subsequent marriage of his mother, his home had in the mean time been transferred to Williston. To that place he returned, and after a brief interval of rest, he became Principal of the Green Mountain Academy at Underhill, where he remained till the summer of 1861. He was designing to enter the Episcopal ministry, but the call to fight seemed at that time more imperative than the call to preach; and though nothing could be more foreign to his tastes and habits than military life, he enlisted as a private in a company which was forming at Essex. The change from a sedentary to an active life was not easily made, and three or four months of sickness, at various times, prevented him from taking part in the engagement at Lee’s Mills, and the battles of Williamsburgh and the 1st Fredericksburgh.

In all the other engagements of the 6th Regiment he bravely bore his part, and at the second battle of Fredericksburgh, received the special commendation of his Captain as having "behaved splendidly." After m ore than two years of hard service he wrote to a friend, "I can truly say that I have never regretted having enlisted as a private, nor have I ever, (even in the darkest hour, when the destruction of this army seemed probable) doubted the final outcome of our cause." The evening before the Army of the Potomac commenced its march toward the Wilderness, he wrote to his mother, "I am blessed with such good health and strength that I can endure and suffer much if need be. I wish you to dismiss all anxiety on my account, especially as I have nine. I hope to live, but I trust I am not afraid to die; in any event I am determined to do my whole duty, and leave the result to Him who doeth all things well. "He fell on the very first day of the battle, shot through the head with a rifle ball, and dying instantly.

He was a man of fine abilities and excellent scholarship, but his talents were solid rather than showy. His amiable disposition, singularly modest demeanor, and agreeable manners, secured the affection of all who knew him; and though he sleeps in an unknown grave, there will be a lasting monument to his memory in the hearts of many who

"Knew him but to love him,

"And named him but to praise."