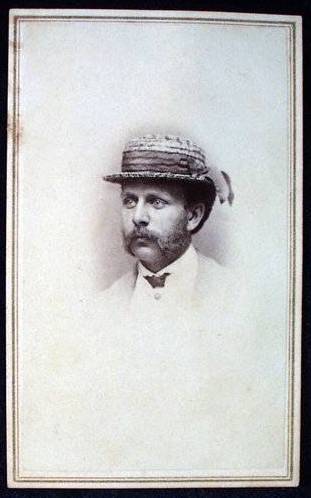 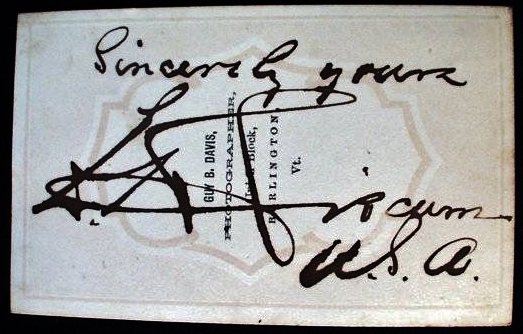 Emerson Hamilton Liscum (Liscomb in the Revised Roster), age 19, of Burlington, enlisted May 2, 1861 and mustered in as 2nd Corporal, Company H, 1st Vermont Volunteer Infantry, on May 9, 1861. He mustered out with the regiment on August 15, 1861. He was engaged in the battle of Big Bethel.

He served as Corporal, Sergeant and 1st Sergeant of Companies E and A, 2nd Battalion, 12th U.S. Infantry, from February 1, 1862, to March 22, 1863. He was commissioned 2nd Lieutenant on March 22, 1863, and 1st Lieutenant on May 4, 1863. He was wounded at Cedar Mountain, in the left elbow, where his conduct in action brought a recommendation for his appointment by the President as 2nd Lieutenant. In the 1wh Infantry he was present in action at Chancellorsville and Gettysburg, where he was severely wounded in the right thigh near Round Top on July 2nd. He was also present in action at Bethesda Church and Hatcher's Run. The regiment was ordered out of the field on November 1, 1864, at which time he was brevetted Captain "for gallant and meritorious services in the field" to date from August 1, 1864. He was regimental quartermaster from February 5 to October 16, 1865.

He was killed in action at the battle of Tientsin, China, on July 13, 1900, and is buried in Arlington National Cemetery. His last words, "Keep up the fire," become the motto of the 9th U.S. Infantry.

New York World: "RECORDS OF OUR HEROES: LISCUM WAS TO HAVE BEEN BRIGADIER."

Washington, DC July 16, 1900-: The defeat of allied forces at Tientsin, China on the morning of the 13th reached New York. The allied forces attacked the city with Russians on the right and the Ninth Infantry, 1,400 strong, and Marines on the left. Losses allied forces were large: 100 Russians were killed including an artillery colonel. British lost over 40; Japan lost 48, the French lost 25.

Americans lost 30. Colonel Emerson H. Liscum of the Ninth Infantry, who was killed at Tientsin, was one of the most gallant of the old Civil War veterans still in the service. At the outbreak of the war he volunteered as a corporal in Company "H" of the First Vt. Infantry, having been born in Vermont. He was mustered out of the volunteers in August, 1861, and immediately entered the Regular Army as a private in the Twelfth Infantry. Promotion was rapid in his case and he received his first commission in the Regular Army as a second lieutenant in February 1863.

He was transferred to the Thirtieth Infantry in 1866 and later became Captain in the Twenty-fifth. He also served in the Nineteenth Infantry as Captain, the Twenty-second Infantry as Lieutenant Colonel, and became Colonel of the Ninth Infantry on 25 April, 1869. He was brevetted a Captain in 1864 for gallant services in the Battle of Bethesda Church and in the campaign before Richmond, Virginia.

Colonel Liscum was in the Saratoga campaign with the Ninth Infantry and was badly wounded at the Battle of San Juan Hill. The War Department had taken note of his splendid service and his name was to have been presented at the next session of Congress for promotion to the rank of Brigadier. When the news from Admiral Remey came to President McKinley that the allied forces had been defeated, the President was deeply pained. He made no comment, but his features showed that the news was received with great emotion. The President expressed great grief at the death of Colonel Liscum whom he characterized as one of the bravest and most efficient men in the service.

Colonel Emerson H. Liscum, who is reported to have fallen at the head of his Ninth Infantry in the disastrous attempt to take the native city at Tien Tsin last Friday, was a veteran of three wars, but had been with that regiment only since it landed in Manila last year, having been promoted to this command on April 29, 1899. He was born in Burlington, this state, 1841. At the outbreak of the civil war he enlisted and served to the end of the war coming out as brevet captain. After the civil war he remained in the service . He was promoted to major ion 1896, and was made lieutenant colonel at the outbreak of the war with Spain and for a time he commanded the first brigade. He was severely wounded at the San Juan hill. He went to the Philippines as colonel and served there with credit and distinction. He left Manila for China with his regiment June 27. He is the first Vermonter known to have yielded his life in the war in China and according to reports, he died as a Vermont hero would prefer, at the head of his regiment and with his 'face' to the foe.

See also: Honors To A Hero; and Unveiling Exercises of a Memorial Tablet To Emerson Hamilton Liscum.