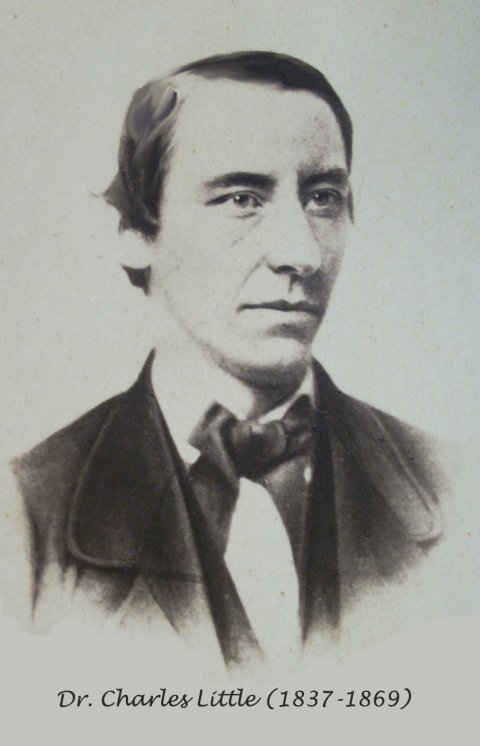 Charles graduated Dartmouth College in 1860. He taught school at Thetford Academy from 1860-1861 and at Francestown, New Hampshire in the spring of 1862. He worked as Hospital Steward of the 15th Regiment of Vermont Volunteers from Oct. 1862 to August 1863. He studied medicine at Dartmouth Medical College and graduated with his M.D. in November 1863 (he matriculated with the Class of 1864). He served as Assistant Surgeon in the United States Navy from 22 Dec. 1863 until September 1865, serving off the coast of South Carolina and Georgia. In March 1864 he was located off the coast on the Santee River in South Carolina when Lt. Commander A. W. Weaver of the U. S. S. Winona asked him to serve aboard his boat with 21 crew members and officers on an expedition to prevent a Confederate steamer, loading at McClellanville with southern cotton, from going to sea. They managed to stop the Little Ada of Glasgow, commanded by a Baltimorean named Martin after a fierce fight. Commander Weaver reported: "I cannot speak in too high praise of the conduct of the officers and men. I wish to recommend to the favorable consideration of the Navy Department ... Acting Assistant Surgeon Charles Little... who deserves much credit for his coolness and zeal." The war ended, Dr. Little spent the next fall season at Dartmouth teaching. After that he went to the College of Physicians and Surgeons in New York City where he remained until April, 1866. At this point he married and settled down in Acton, Massachusetts, where he practiced his profession for three years until his untimely death. He died in Acton, Massachusetts, 16 Nov., 1869 (age 32). Mrs. Little d. 17 Oct., 1886.

CHARLES LITTLE, M. D.
Late of Acton, Mass.
LITTLE, CHARLES. Volunteer officer; b. New Hampshire; res. Webster; app. Acting Asst. Surg. Dec. 24, '63; served on U. S. S. "Winona"; disch. Oct. 9, '65. (Record, Ayling's Register, 1895, p. 1140.)
Charles Little was born in West Boscawen (now Webster), N. H., February 14, 1837, and was the son of Richard and Mary Coffin (Pillsbury) Little, and a grandson of Benjamin Little, of the same town. The grandfather was a soldier in the War of the Revolution and took part in the battle of Bennington. Captain Richard Little, the doctor's father, was an officer in the War of 1812, and was stationed at Portsmouth in 1814. They were descendants of George Little, of Newbury, Mass.
Surgeon Little received his preliminary education in the common schools and academies of New Hampshire, fitting for college at Phillips Academy, Andover, Mass., and received the degree of A. B. from Dartmouth College in the class of 1860. He commenced the study of medicine in 1860, under the direction of Dr. Harris Cowdrey of Acton, Mass., and continued the same under the direction of Dr. Carlton P. Frost, of St. Johnsbury, Vt. He attended medical lectures at Hanover and New York, and received the degree of M. D. from the Medical Department of Dartmouth College in the class of 1864.
In the meantime he was hospital steward in the Fifteenth Vermont Volunteers, of which his preceptor, Dr. Carlton P. Frost, was surgeon, and was appointed acting assistant surgeon in the navy from New Hampshire, December 24, 1863, and served on the United States steamship "Winona" until discharged, October 9, 1865. After leaving the United States service, he located in Acton, Mass., where he resided until his death, which occurred November 16, 1869.
Married, June 11, 1866, to Helen E., only daughter of Dr. Harris and Abigail Cowdrey of Acton, Mass., who died in 1886.
No children.