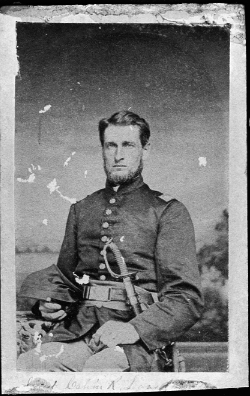 From Lieut. Loveland whose return to this place we noted last week, we learn that the following deaths have occurred in his company since arriving at Chicago:

At the time of his leaving, there were sick, in the hospital: Wm. Barber, John Stone, and Jonas Fisher
Of those sick, but not in the hospital, he mentions, Arba N. Adams of Hyde Park, which is affected with a bad sore on his leg, resembling a fever sore; John C. Mills of Johnson; J.P. McElory of Waterville, and E. and G. Gallup of of Cambridge.

C.H. Hodge, of Stowe, has been sick, but is now at home, having come with the body of Henry B. Lee.

The number on the sick list, excused from duty was from fifteen to eighteen daily.

The condition of the regiment is not very bad. Their quarters are quite tolerable, though the members, as there seems no good reason why they should not be, are very much dissatisfied. With being kept so far from home, when they could do as much service for their country if allowed to return to their native state.

Lieut. Guyer is with his regiment. Lieutenant Loveland will return on the 30th of this month.

Captain Slayton, we are informed, has resigned, and is now at home, having arrived last week.