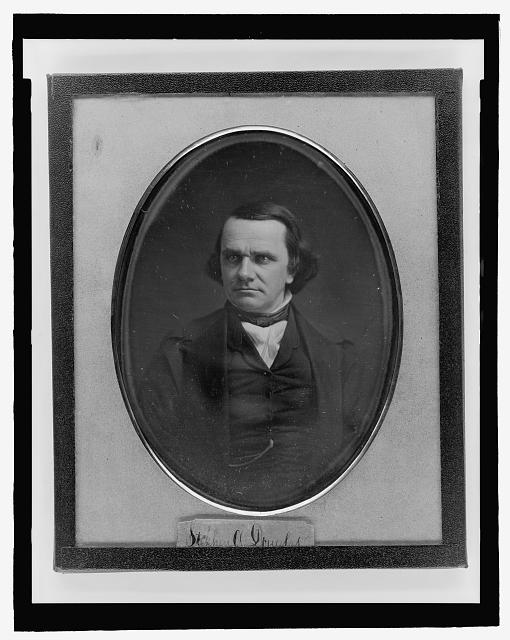 DOUGLAS, STEPHEN ARNOLD, a Representative and a Senator from Illinois; born in Brandon, Rutland County, Vt., April 23, 1813; educated in the common schools and completed preparatory studies in Brandon Academy; learned the cabinetmaker's trade; moved to a farm near Clifton Springs, N.Y.; entered Canandaigua Academy in 1832 and studied law; moved to Cleveland, Ohio, in 1833, and finally settled in Winchester, Ill., where he taught school and resumed the study of law; admitted to the bar in 1834 and commenced practice in Jacksonville, Morgan County, Ill.; elected State's attorney for the Morgan circuit in 1835; member, State house of representatives 1836-1837; register of the land office at Springfield in 1837; unsuccessful Democratic candidate for election in 1838 to the Twenty-sixth Congress; appointed secretary of State of Illinois during the session of the legislature in 1840 and 1841 and at the same session was elected as one of the judges of the State supreme court; elected as a Democrat to the Twenty-eighth, Twenty-ninth, and Thirtieth Congresses and served from March 4, 1843, until his resignation on March 3, 1847, at the close of the Twenty-ninth Congress; chair, Committee on Territories (Twenty-ninth Congress); elected as a Democrat to the United States Senate in 1847; reelected in 1853 and again in 1859, and served from March 4, 1847, until his death on June 3, 1861; chair, Committee on Territories (Thirtieth through Thirty-fifth Congresses); unsuccessful candidate for the nomination for President of the United States on the Democratic ticket in 1852 and 1856; unsuccessful Democratic candidate for President in 1860; died in Chicago, Ill.; interment in Douglas Monument Park.