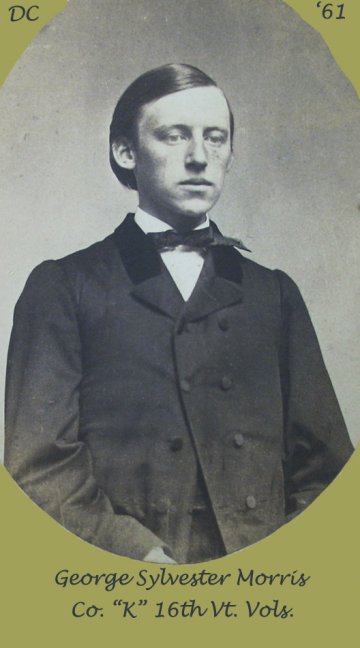 George Sylvester Morris was born in the small village of Norwich, Vt., 15 Nov., 1840, son of Sylvester & Susan Jackson (Weston) Morris. He was descended from a long line of New England ancestry. He received his early education at the Norwich district school and then at the Kimball Union Academy in Meriden, NH. After the usual four years' course, he graduated from Dartmouth in 1861. He taught school for one year in Royalton, Vermont. He shaped his education course booked for the ministry. But the tendency among men of high intellectual attainment in the mid 19th century began to have an effect upon him, not long after he reached the age of twenty-one years. This was at the time when the whole country came under the stirring influence of the Rebellion.

Morris was a peaceful man and enjoyed school teaching but like all young men of his generation, he was called to join the cause. The disasters of the Pennsylvania campaign had aroused the North. Vermont's quota was 4,898 men. Morris enlisted 15 Sept., 1862 in Co. "K", 16th Vt. Volunteers, and was mustered in as corporal for three months. The 16th Vermont was gifted with Colonel Wheelock G. Veazey (Dartmouth '59) in charge. Veazey made this record in his roster: "A more intelligent body of men, it is safe to say, was never mustered for any regiment. Veazey understood Morris' absolute abhorrence to violence and killing, so he gave him a job that kept him away from the possibility of engagement with the enemy. Morris tells in a letter of his appointment as a mail carrier and assistant brigade postmaster:

"I am very glad of the place, especially as I did not ask for it. Of course, I have nothing more to do with a gun."

Morris was discharged with his company, 10 Aug., 1863, satisfied that he had done his duty for his Country at a time when he was needed.

Immediately after the war he came home to Vermont and taught for another year.

He received the degree of M.A. while serving as a tutor at Dartmouth. Through the influence of Dartmouth's Professor Henry B. Smith, philosopher and theologian, Henry entered the Union Theological Seminary in New York in 1864. After two years, he abandoned his course of study and wrote to a friend that "the study of theology has never been renewed by me." Hungry for study in philosophy, in the fall of 1865, Henry took a tour of Europe. His parents and sisters were troubled at the thought that German philosophy might destroy his religious faith, but Morris was determined and a friend loaned him $3,000 for the trip. Morris was then twenty-five years of age. In Germany, Switzerland, and other European countries, Morris came under the influence of noted teachers of philosophy, including Herman Ulrici and notably Jean Frederick Astle, eminent philosophical theologian of whom Morris wrote: "I first saw a monk." Ulrici did not believe in the permanence of the American Republic. Morris remained studying and traveling in Europe for two years and a half. He enjoyed studying with Trendelenburg of Germany whose own philosophy was formed as a pupil with of Reinhold the celebrated Kantian, also of Hegel, Ritter, Bopp, and Steffens.

When he returned to America, Morris, was doubly bereaved. His mother's death and the breaking off of his expected marriage to a Miss Denison, who commented that he had "grown so learned and had changed so much in his religious opinion, that she was afraid of him," was not as he expected. He went to New York City and secured a position as tutor in the family of Jesse Seligman, banker and philanthropist who was an immigrant to America in 1840 from Bavaria. Seligman had three sons and three daughters at the time. He remained living with the Seligman family in New York City for two years. In 1870 he went to the University of Michigan to fill the Chair of Modern Languages and Literature. In the fall of 1872 he was under consideration for the Chair of Philosophy and the Chaplaincy at Bowdoin College, but Morris declined the offer. In 1878 he became a lecturer in history of philosophy and ethics at Johns Hopkins where he remained seven years. He was John Dewey's teacher and later brought Dewey to the philosophy department of the University of Michigan. When Morris died, Dewey succeeded him.

Professor Morris' "Ely Lectures on Philosophy and Christianity" discusses philosophy as a successful intellectual course and religion as a sublime reality, and that a philosophic examination and statement of the contents of Christianity was not only a possibility, but a desideratum. These lectures were published by the Ely Foundation for the students of Union Theological Seminary. Professor Morris believed firmly that relation is a function of consciousness, so there must exist a single, permanent and all-inclusive self-consciousness -an Absolute, or God. He criticized philosophy's overemphasis on logic and empiricism: thought is a form of motion and understanding it requires a 'science' of lived experience.