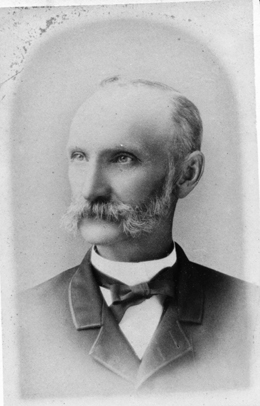 Dr. Henry Clay Newell died at his home on Church street Sunday afternoon at 5:30 o'clock in his 87th year.

Dr. Newell was born in Burke October 19, 1835, being the son of Dr. Selim Newell, one of the earlier physicians of this section who had a wife and successful practice. The family came to St. Johnsbury when the subject of this sketch was a boy and he was educated in our public schools and at St. Johnsbury Academy. He was graduated from Dartmouth College in the class of 1860 and obtained his medical education at Bowdoin College. In his early manhood, he taught school successfully in many places. He was for a time principal of the old Lyndon Academy, taught in St, Johnsbury Academy and also taught in several of the district schools of this county.

On August 12, 1863 he enlisted in the army and was commissioned assistant surgeon of the Third Vermont regiment October 2, 1863. This was Col. Redfield Proctor's regiment and Dr. Newell was in the service until May 20, 1865. He was present and officiated in his office durin' the engagements of the regiment at the battles of Spottsylvania, North Anna, Cold Harbor, Petersburg, Opequon, Winchester, Charles town, Fisher's Hill and Cedar Creek.

After the war he returned to St. Johnsbury to take up the practice of medicine which he faithfully followed for the next 50 years. A resident of Barnet for about nine years, beginning in 1869, he returned to this town where he has lived ever since.

On March 29, 1866, he was married to Hannah Maria Hazen at Newbury. He is survived by his wife and three children: Mrs. Margaret N. Heywood, who with her mother has tenderly cared for Dr. Newell in his illness; Salim Newell of Carlisle, Penn.; Downer H. Newell of Holyoke, Mass.; One daughter, Frances Isabel died in infancy. He leaves one grandchild, Henry Hazen Newell, son of Mr. And Mrs. Downer H. Newell. He also leaves three sisters, Mrs. George H. Bradford of Sherbrooke, Mrs. Henry G. Ely of St. Johnsbury and Miss Etta M. Newell of Hanover.

Dr. Newell was an active member of Chamberlin Post, No. 1, and also a regular attendant at the annual gatherings in St. Johnsbury of the Third Vermont regiment association. During the administration of Gov. Horace Fairbanks he was Surgeon-General on the Chief Executive's staff.

Dr. Newell joined the North Congregational church on July 4, 1858 and through the years has been one of its most loyal workers and faithful attendants. He was active in the Sunday school, served at one time as deacon of the church and was always in his accustomed place at the weekly prayer meeting.

Dr. Newell's long life of unselfish service in his profession is his own memorial. His work was done before the days of automobiles and in sunshine or in rain, in summer's heat or winter's cold, he would drive over our country roads to minister to the sick, many times without remuneration except the gratitude that comes from those who had been helped in time of need. He kept this up until only a few years ago when he retired to the comforts of the home and though in the last few months his health steadily failed his mind was perfectly clear and he greatly enjoyed social visits with his friends. He was especially fond of the outdoor life and no one enjoyed fishing more than he did, and there were few that were more successful. He was a genial conversationalist, a facile and brilliant correspondent and a man who made many friends by his cheery disposition and optimistic views.

The funeral was held at his late residence Thursday afternoon at 2 o'clock.