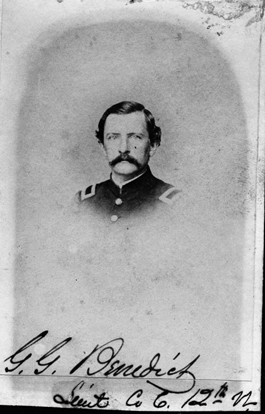 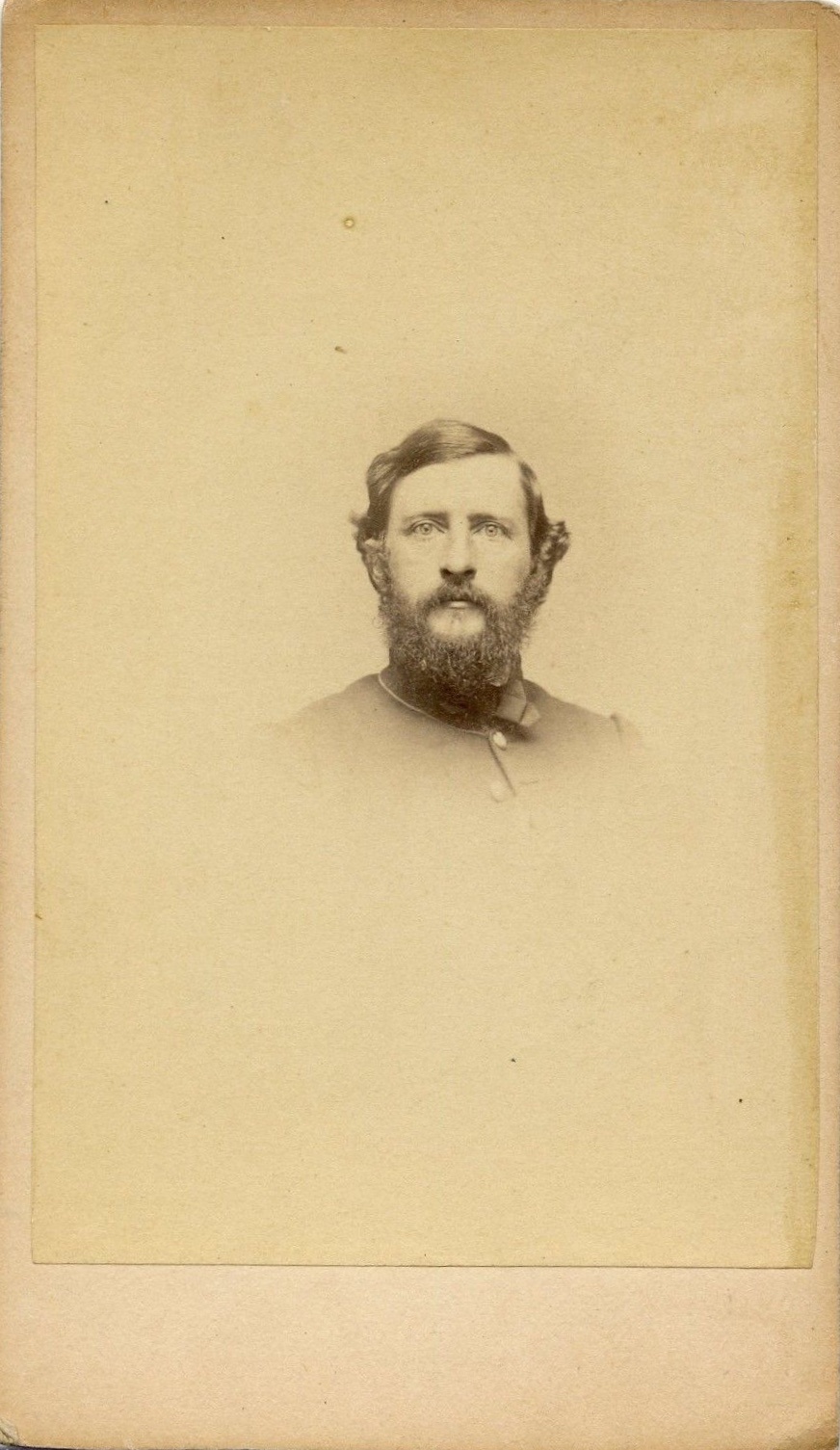 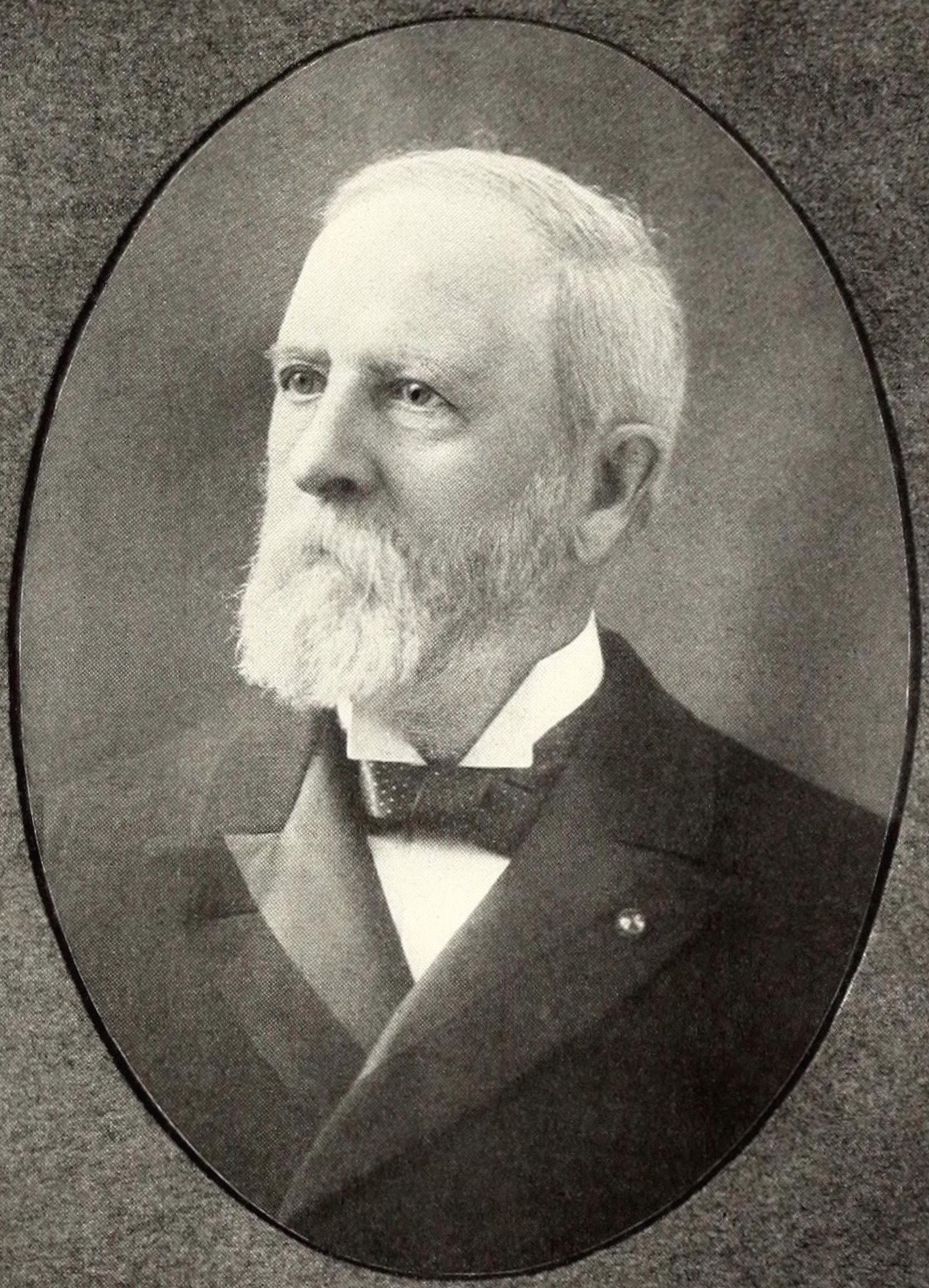 Benedict, George Granville (sic), son of George Wyllys and Eliza (Dewey) Benedict, was born in Burlington, Dec. 26, 1826.
Mr. G. G. Benedict prepared for matriculation at college in the academy at Burlington, entered the University of Vermont and graduated with honors in 1847, receiving the degree of Master of Arts in 1850. In 1865 he was elected member of the corporation of the university and was also appointed its secretary.
Subsequent to his graduation Mr. Benedict taught in the city of New York for about twelve months, and for the three following years was employed in building the lines of the Vermont & Boston Telegraph Co. In 1853 he acquired a proprietary interest in the daily and weekly Burlington Free Press, became associate editor, and is now editor-in-chief of the same paper. He was also postmaster of Burlington and president of the Vermont & Boston Telegraph Co. from 1860 to 1864.
In August, 1862, he enlisted as a private in Co. C, 12th Regiment, Vermont Volunteer Militia. In January, 1863, he was promoted to a lieutenant, and later was appointed aide-camp on the staff of Gen. George J. Stannard, commanding the 2d brigade of Vt. Vols. At the expiration of Lieutenant Benedict's term of service he was honorably discharged on the 14th of July, 1863. In 1865 he held the office of assistant inspector general with the rank of major.
In 1866 he was appointed aid-de-camp on the staff of Gov. Paul Dillingham, with the rank of colonel. In 1869 he was elected to the state Senate from Chittenden County, and served in the committees on education and military affairs. Re-elected to the same body in the following year, he served therein as chairman of the committee on education and in the committee on military affairs.
In civil life Colonel Benedict also served as director of the old Farmers' and Mechanics' Bank. Very appropriately, too, in view of his antecedents, he has been corresponding secretary of the Vermont Historical Society for a long series of years. In 1879 Colonel Benedict was appointed by Governor Proctor state military historian to prepare a history of the part taken by Vermont in the war for the Union, which work he did with painstaking care and great literary ability.
He was married on the 27th of October, 1853, to Mary Anne, daughter of Edward and Abigail Frances (Warner) Kellogg of Canaan, N. Y. One daughter was the issue of this union. Mrs. Benedict died on the 9th of November, 1857. Mr. Benedict married as his second wife on the 22d of December, 1864, Catherine Almira, daughter of the Rev. Alvin Pease, D. D., and Martha (Howes) Pease of Rochester, N. Y. A daughter, who died in infancy, and one son were the fruits of his second marriage.

In the death of Col. George G. Benedict of Burlington, the state suffers a great loss. In a life of over eighty years he enriched all with whom he came in contact, by his love of service and his faithfulness to lofty ideals of living and action. He was the Nestor of Vermont journalism and probably his record of nearly fifty-four years as editor of the same paper is unparalleled in American journalism. He was a graceful and ready writer and a fearless champion of what he believed was right. But it is not alone as a journalist that his fame will be perpetuated. As a historian, and one active in many of Vermont's educational and financial enterprises, he will be sadly missed. Burlington has lost her first citizen.

Col. George Grenville Benedict, the dean of Vermont journalism and editor-in-chief of The Burlington Daily Free Press, died at Camden, S. C., on Monday. He was en route home from Florida where he had been spending the winter. Mr. Benedict's life has been one of usefulness and the record he leaves is an honor to his fair name. No man has done more for Vermont. The columns of his paper were always open to further the interest of the Green Mountain state which he dearly loved. In politics he was a staunch Republican and an active party worker. He was honored many times by his party, and always in a way that well merited recognition. It has been a pleasure to know Mr. Benedict.

In the death of G. Ag. Benedict, senior editor of The Burlington Free Press, which occurred on Monday last, the state loses its oldest newspaper man. For half a century Mr. Benedict has been identified with the press of the state and his pen has wielded a strong influence for everything that was good and of benefit to the state. As a student and writer of Vermont history he ranked among the first and his knowledge of all that pertained to the history of Vermont was most accurate. His "Vermont in the Civil War" is of inestimable value to the state and a lasting monument to his memory. A Christian gentleman, a close student, a deep thinker, a wise counselor, and a kind friend, he has closed his work and come to the grave "in a full age, like as a shock of corn cometh in his season."