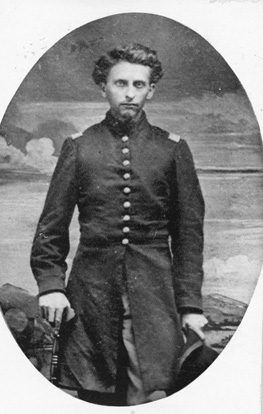 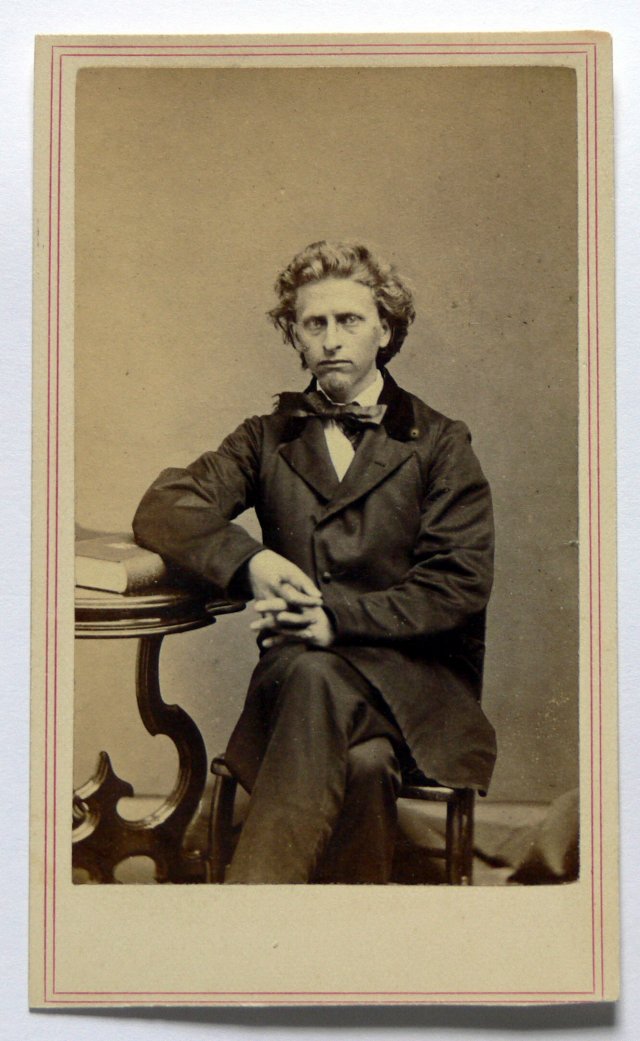 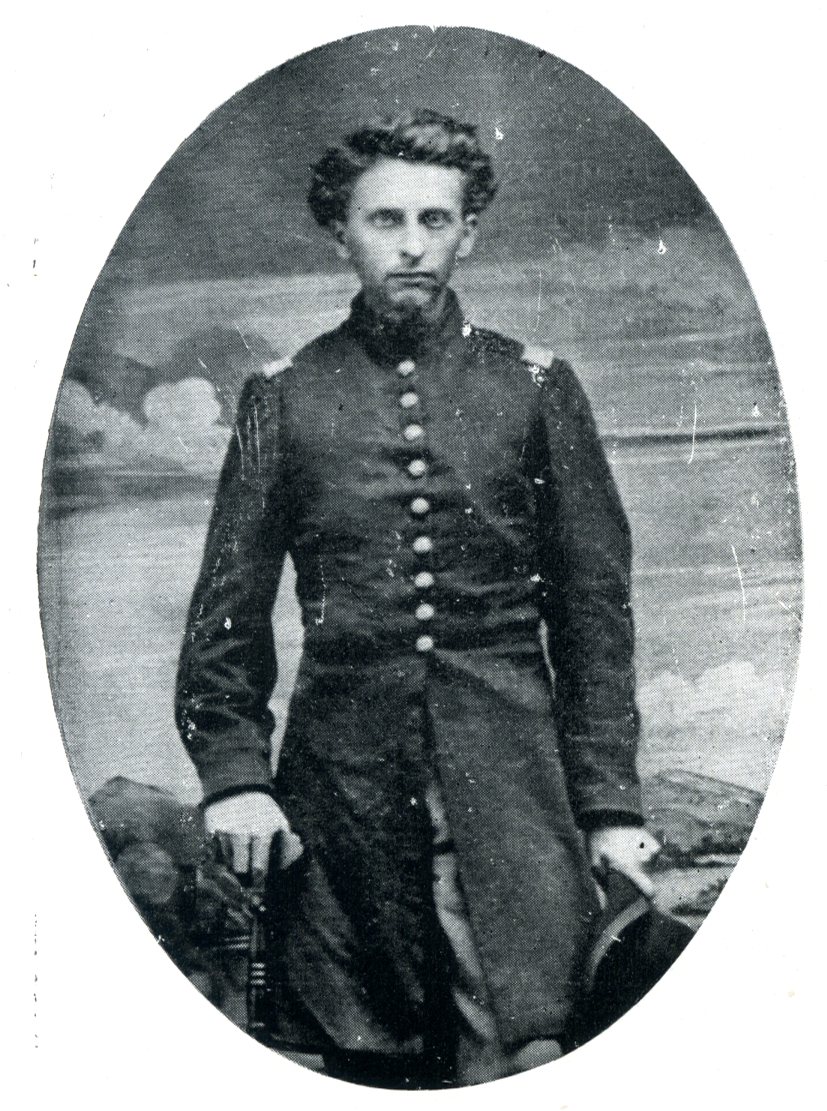 EDWIN F. PALMER was second lieutenant of Company B, 13th Vt. Regt. He was a son of Aaron and Sarah (Thayer) Palmer, and was born in Waitsfield, Vt., Jan. 22, 1836. He fitted at Northfleld, Vt. and entered Dartmouth College in 1858, continued through the course of four years and graduated in 1862. In a short time after graduating, he enlisted and was appointed a sergeant in Company B. A few days after the regiment arrived in Washington Lieut. Jones of Company B died with the fever, and Sergeant Palmer was appointed second lieutenant by Gov. Holbrook. His commission was dated November 4th, 1862. Lieut. Palmer was rarely ever excused, and performed the usual duties of officers of his rank. He went through the Gettysburg campaign, and soon after, having served his term of enlistment, was mustered out with his regiment. He taught school during the next winter. In the spring of 1864 he commenced the study of law with Gov. Paul Dillingham. After admission to the bar he settled in Water- bury, where he has since resided, and for the greater part of the time in the active practice of his profession. He represented the town of Waterbury in the state Legislature in 1880, 1888, and 1896. In 1880 he was appointed by the judges of the Supreme Court, reporter of its decisions. He reported and published eight volumes of the Vermont Law Reports, commencing with the 53d Vt. Report. In 1888 he was elected by the Legislature State Superintendent of Education and was re-elected in 1890, serving four years in that capacity.

Mr. Palmer is the author of several important statute laws. In 1888 he introduced three bills, one to "suppress bucket-shops, gambling in stocks, bonds, grain, etc." another to "prevent the sale of fermented cider," and a third that affords "a better protection to the homestead." These became laws. In 1890 and 1892 he collected many statistics, and published them in his reports to the Legislature, which showed the gross inequality of taxation for the support of the common schools. In 1890 he wrote a bill and caused it to be introduced, which appropriated about $100,000 from the state treasury, to be divided equally among the legal schools. This was passed and became a law. In 1892 he wrote another bill and caused it to be introduced which abolished the old district system, and adopted the town system of schools. This also became a law. In both his reports to the Legislature he strongly urged that these measures were absolutely necessary for any real improvement of our schools. In 1896 he introduced a bill which became a law, that put the school-houses as to "lighting, heating, ventilation and other sanitary arrangements," in the control of the State Board of Health. Lieut. Palmer was married June 15th, 1865 to Miss Addie D. Hartshorn, daughter of Hon. William H. Hartshorn, Guildhall, Vt. Their children are: Edwin F. Palmer, Jr., born February 24, 1868; Annie D. Palmer, born March 23, 1870; Alice D. Palmer, born May 23, 1872; Mabel Palmer, born August 15, 1874; John H. Palmer, born June 9, 1877; Charles C. Palmer, born April 8, 1879; Robert W. Palmer, born July 9, 1884.

Edwin Franklin Palmer was born in Waitsfield, Vermont, 22 Jan., 1836, son of Aaron & Sarah (Thayer) Palmer. Aaron Palmer was a farmer, settling on one of the large farms on Waitsfield Common. Aaron's own father was one of the earliest settlers in Waitsfield and established a farm on what became known as "Palmer Hill."

E. F. Palmer was of a family of eleven children, all of them were natural students and encouraged by their parents to obtain an advanced education. Four of the sons graduated Dartmouth College. Mr. Palmer attended school at Northfield Academy and in the fall of 1858, entered Dartmouth College, graduating with the Class of 1862. At Waitsfield on 25 Aug., 1862, he enlisted in the Union Army in Company "B" of the 13th Vt. Volunteer regiment. He was promoted to sergeant. He was commissioned second lieutenant 4 Nov., 1862, and mustered out with his company, 21 July, 1863.

He was author of the book, "The Second Brigade or Camp Life By A Volunteer," which he published by himself in 1864 about his own experiences, and which was widely received and acknowledged as a fine work.

He returned from the war and in 1864, began the study of law in the office of Governor Paul Dillingham. He was admitted to the bar and settled in Waterbury, Vermont. He was a highly successful attorney and argued many cases before the Vermont Supreme Court. He represented Waterbury in the legislature 1880, 1888 and 1896. From 1880 to 1888 he was a reporter of the Supreme Court and published eight volumes of the State reports. In 1888 he was elected States Superintendent of Education, and again in 1890. He made two exhaustive reports which marked a new epoch in the education affairs of Vermont and from where the commencement of Vermont's modern education system must be dated. It was largely through his influence and efforts that the "town system" of education was adopted. He took the post when the public schools of Vermont were at a low ebb. He labored with marked ability, painstaking industry and conscientious fidelity to improve them and the system upon which they depended.

He raised the standard of scholarship for teachers, equalized the burdens of taxation for schools, increased attendance, lengthening the terms of school and gave superintendents more power to govern their respective school districts with support from the state.

His brother Orman C. became a prominent educator himself in Yakima, Washington, and the brothers shared their ideas about how to improve their states' commitment to public education. Attorney Palmer was a member of the Congregational Church for 49 years and a member of the Dillingham Post G.A.R. He also was noted for being a prominent speaker on political and education matters.

Edwin married in Guildhall, Vt., 15 June, 1865, Addie D. Hartshorn. They had seven children together, four of whom were living in 1914. Three little daughters, Annie, Alice, and Mabel died within four years of each other.

Attorney Palmer died at the hospital in Waterbury, Vermont, Thursday morning, 9 o'clock, 8 Oct., 1914. He was survived by his wife, four sons, Edwin F. Jr. of Waterbury, John H. of Dorchester, Massachusetts; Robert W. of Cambridge, Massachusetts; and Charles C. of Warren, NH. Also, two grandchildren. His funeral was held on Sunday afternoon, 2:30 p.m. at his late home on Union Street with Rev. W. L. Boicourt, pastor of the Congregational Church officiated, assisted by Rev. W. E. Douglass, pastor of the Methodist Church. Rev. Douglass spoke of Mr. Palmer "as a soldier and an education, a friend, lawyer and a professional man." The bearers were the four sons with honorary bearers of G. S. Bidwell, J. W. Moody, E. W. Huntley, and J. K. Fullerton.