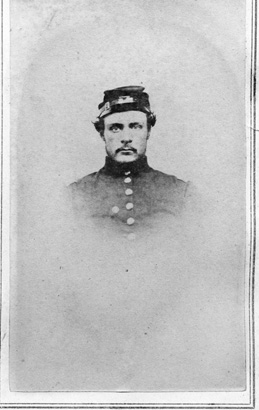 DEATH AND FUNERAL OF GEORGE H. PHELPS OF ALBANY

he body of Lieut. George H. Phelps, whose sickness and death was noticed by our our army correspondents last week, was brought home to his parents in Albany on Monday of last week we believe.He died of typhoid fever, at Camp Griffin, Virginia, on the 2d inst. His funeral took place on the Thursday following his arrival home.It was attended by a multitude of people, by many more than could gain enterance to the church, where an excellent and affecting sermon was preached by Rev.Homer T. Jones. George H. Phelps was a young man of more than ordinary talent and scholarly attainments, and he bid fair to an ornament to his country, but he left all to take up arms in its defense and lay down his life for its welfare. His loss is sinerely mourned, but his name will be remembered with honor.

The following lines, written by a lady friend, were read by the minister at the close of the funeral exercises:--

Gently, O gently lay him to rest.
So cold, so cold, so still:
Fondly we loved him, yet Jesus knew besr
And we bow to his soverign will.
His life work is finished--his labors are o'er.
His country can claim him a soldier no more.

Gently,O gently bear him away.
'Neath the banner he died but to save:
Sadly we mourned for the loved one today,
As we lay him away him away in the grave.
He was ready to die for his country and God;
He has fallen asleep and we bow 'neath the rod.

Gently, O gently bear him away,
Neath the skies of his own native clime:
Through his comrades may weep for the soldier today.
Nor the will of the Master divine,
He hath answered the call of his Captain"s
Command,
Who speaks from the shore of the far distant
Land.

They caught not the sound of the boatman"s
Damp oar,
As he crossed o'er the deep foaming tide,
And carried the soul which the casket once bore,
So soon to the other side.
But we know mid the tempest it could not be
Lost,
For a martyr to freedom he died at his post.

How sacred the grave where the soldier is laid,
We will pause where,er it is found,
And scatter sweet buds 'neath the willowy
Shade,
To bloom on the thrice honored ground.
And we pray that when life with its sorrow's is
O'er,
We shall meet our brave soldier on the heavenly
Shore.

The death of young Phelps is the ninth that has occurred among the Orleans boys since they have been quartered in Virginia. In addition to those heretofore recorded by us; Seth Bumps, of Albany; Josiah Libbey, of Barton,; a Mr. Page of of Derby;, and a young man from Craftsbury, whose name we do not now remember, have joined that

"innumerable caravan
That moves to the pale realms of shade"

LIEUT. GEO. H. PHELPS, son of Seth and Laura (Hovey) Phelps, was born in 1840. He early gave evidence of superior intellectual ability. Hia lessons at school were mastered with a will and always ready at the time, and he entered upon his Academical course, at the West Albany Academy, then under the direction of Dr. A. J. Hyde, in 1855. This Fall term seemed to arouse new energies, and the next Spring finds him pursuing the student's course at Morrisville Academy, studying and teaching alternately. He became popular as a scholar and teacher. From Morrisville, he went to Newbury Seminary where he fitted for college and entered Dartmouth a year in advance. — During his Collegiate year, he enlisted in the 6th Vt Reg., Co. D. Mr. Phelps was elected lieutenant of his company, and served during life. He died in camp near Washington D.C. of typhoid fever, Jan. 2, 1862, aged 22 years, and his remains now rest, with the evergreen sprig, in the beautiful cemetery near his native village. Lieut. Phelps, as an officer, was respected and beloved by his men. He was a scholar and a gentleman. The news of his early death sent a thrill through the whole loyal community. Multitudes gathered at his funeral, and his memory will stay long with those who knew him.