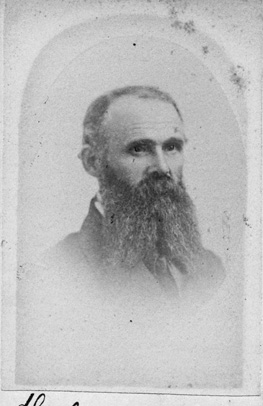 "In consideration of his character as a man, his having been a graduate of the United States Military Academy at West Point, and served as an officer in the regular army in the war with Mexico, John Wolcott Phelps, of Brattleboro', was commissioned by Governor Fairbanks, on the 2d of May, 1861, Colonel of the First Regiment Vermont Volunteers, sent out under the call of President Lincoln for seventy-five thousand volunteers for three months' service. He went to Fortress Monroe with the regiment, and was commander of the post. On the 27th of May, 1861, he was promoted to Brigadier General of United States Volunteers. He went on an expedition to the Gulf of Mexico, in November, 1861, and took military possession of Ship Island, Miss.; was with Commodore Farragut's fleet in forcing the opening of the Lower Mississippi, in April, 1862, and with the naval force taking possession of Forts Jackson and St. Philip, La., April 28, 1862, and of New Orleans, La., May 1, 1862, and organized the first negro troops. He was stationed at Carrollton, seven miles from New Orleans, and his camp was literally thronged with black fugitives. General Phelps formed the men of suitable age into companies, and made a requisition on General Butler, who was in command of the Department, for arms for them, saying, that he desired to raise three regiments of Africans for the defense of the point where he was located, which was unhealthy, and his men were dying at the rate of two or three a day. General Butler directed him to employ the contrabands in and about the camp, in cutting down all the trees, &c., for the purpose of defense, and ordered the quartermaster to furnish axes and tents for the contrabands. General Phelps replied that he was willing to organized African regiments for the defense of the Government, but would not become the mere slave-driver, "having no qualification that way," and tendered his resignation, which General Butler refused to accept.

"In August, 1862, General Phelps, with his reasons therefore, returned his commission to the President. Months afterwards, when circumstances compelled the Administration to adopt the very policy proposed by General Phelps, the President offered him a Major General's commission, which he would accept only on condition that it should bear date upon the day of his resignation. To this the President would not accede, as, while it would by only justice to General Phelps, it would be an implied censure of General Butler, whose conduct in the matter was approved by the Administration, though a change of policy became expedient and necessary afterwards.

"By an order of the rebel government, dated August 21, 1862, General Phelps was declared an outlaw, for having "organized and armed negro slaves for military service against their masters, citizens of the Confederacy."

"General Phelps was a most accomplished officer. By his constant thoughtfulness of the comfort of his men, and his peculiar mode of enforcing discipline, he was very much respected and beloved by his whole command. On resigning his commission he returned to Brattleboro', where he has since resided, enjoying the confidence and esteem of all who know him."

The First Vermont rendezvoused at Rutland, Vt., and left there for Fortress Monroe, Va., 9 May 61, where it arrived on the 13th, and remained for about three weeks, drilling and assisting in mounting heavy guns on the fort. Major-General Benjamin F. Butler arrived 22 May, and assumed command of the forces at that point.

On 7 May, Colonel Phelps and his command were transferred to Newport News, at the mouth of the James River, about ten miles from Fortress Monroe, which place he entrenched, and designated "Camp Butler." His command here consisted of the First Vermont, Fourth Massachusetts and Seventh New York regiments. In the fall of 1861, General Phelps was ordered to Ship Island in the Department of the Gulf, where he had a command under Major-General Butler. Among other regiments in that department were the Seventh and Eighth Vermont. During the summer of 1861 a misunderstanding arose between General Phelps, General Butler and the Government, which resulted in the resignation of General Phelps on 21 Aug 62. General Phelps was appointed from the army, and his record as an officer may be found in the list of Vermonters who served in the regular army.