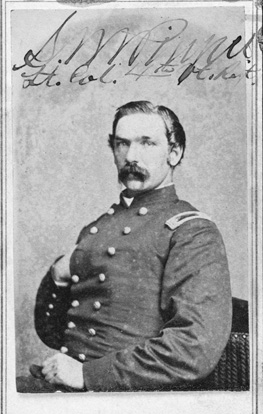 News of the death of Lieut-Colonel Stephen M. Pingree at the Soldiers' Home in Bennington, Vt., Tuesday, will be received with sorrow by his army comrades and other friends. He was born in Salisbury, N. H., March 21, 1835. he chose the law as his profession, and had commenced the practice of it in the town of Stockbridge, Windsor county, when the war broke out. Upon the organization of the fourth regiment of Vt. Volunteers he enlisted in September, 1861, in Co. E, of that regiment, and went out with it as 1st lieutenant of that company. He was promoted successively to the captaincy of Co. K, April 21, 1862, to be major, Nov. 5, 1862,and to be lieutenant-colonel, April 30, 1864. He served through the three years' term of the regiment, and was mustered out with the surviving original members thereof on Sept. 30, 1864. After the close of the war Col. Pingree settled in Hartford, Vt., and became the law partner of his brother, Col. Samuel E. Pingree, and he resided there until his death. He had been in impaired health for several years. When cancer of the throat developed in November, 1891, he was removed to the Soldiers' Home where he received the kindest care. He realized the hopelessness of his case; ore his sufferings with manly fortitude, and awaited the final summons with resignation. He was a man of enthusiastic and generous impulses, an earnest patriot and a brave soldier. He was proud of his service under the flag; and prominent in various organizations of veterans. He was the first commander of A. Lincoln post, G. A. R., of Hartford, and president of the Memorial Association of that town. He was a fine speaker and will be much missed from meetings of the Officers' Reunion society and the Grand Army gatherings. He represented the town of Hartford in the legislature of 1872-3. His remains were taken to Hartford for burial. He leaves no family, his wife having died about a year ago, and they had no children.