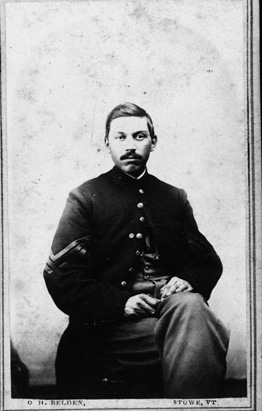 Raymond, Albert C., of Stowe, son of Asa and Jane (Lovejoy) Raymond, was born in Stowe, Feb. 10, 1842. His father is a prominent and lifelong resident of Stowe and has arrived at four-score years after a busy and successful career.

Albert C. studied in the public schools and in Barre Academy, then under the charge of Professor Spaulding. Immediately after the completion of his educational career in 1862 Mr. Raymond enlisted in Company E, 13th Regt. Vt. Vols., and July 3, 1863, helped to stem the tide of Pickett's charge at Gettysburg. Never absent from duty a single day, at his discharge he re-enlisted in the 17th Regt. and was in every general engagement from the Wilderness to Appomattox. On July 26, 1864, Lieutenant Raymond was wounded in the face and temporarily lost the use of his eyes, but he rejoined his command in October. His company in the battle of Petersburg Mine was reduced to a corporal and eight men, and it was as captain of this gallant little band that the subject of this sketch was mustered out at the expiration of his term of service.

On his return from these exciting scenes he determined to push his fortune in the West, and for eight years made his residence in the state of Iowa, where he engaged in farming. Here his children were born and here he had the misfortune to lose their excellent mother. Soon after this sad event he returned to his native town and engaged in various occupations including the care and labor involved in a small farm, while in addition he has given his attention to the settlement of estates and has acted as guardian and trustee.

He married, June 11, 1865, Priscilla, daughter of John and Louisa (Town) Moody of Stowe. Their union was blessed with three children: Louis H., Louise (Mrs. Fred Fogg of Enfield, N. H.), and Maud B. Mrs. Raymond died in 1872, and Mr. Raymond later espoused Martha, daughter of Hiram Smalley of Greensboro, who departed this life in April, 1882. Mr. Raymond's third alliance was contracted in 1883 with Alice, daughter of Medad and Patty (Miller) Hitchcock. Of this union three sons were issue, one of whom, Paul, alone survives.

Mr. Raymond for many years has discharged the duties of selectman and town clerk, was made postmaster in 1889 and still holds that position. He was also a member of the General Assembly in 1886 and served on the special committee on the division of the town of Rutland.

He belongs to the order of the Loyal Legion and is past commander of H. H. Smith Post, G.A.R., of Stowe. Thirty years since, he became a Free Mason, and has repeatedly filled the master's chair in Mystic Lodge, No. 56, which holds its communications in his native town.