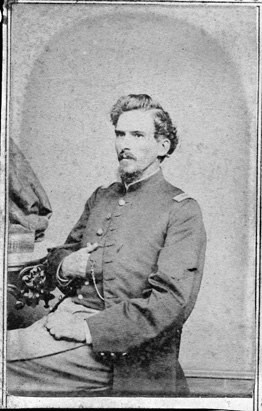 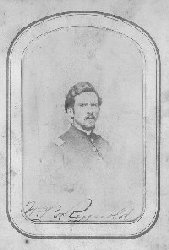 William B. Reynolds was born in Milton, Vermont in 1840, the fourth child of William V. Reynolds (b. 1809 d. 1877) and Sarah Brown, of Grand Isle, Vt. (b. 1806 d. 1842). His father owned a country store, was a local magistrate, a sheep farmer and a wool contractor in Winooski, VT. His paternal grandfather Grindal Reynolds, Jr., and great-grandfather, Grindal Reynolds, Sr. both served in the American Revolutionary Army in Vermont. His grandfather served at the age of 16.

Prior to the war William studied law as a clerk in a law firm in Burlington, VT. On October 7th, he enlisted in Montpelier and began as a Lieutenant in Company I, 6th Vermont Regimentfor an initial term of three years. According to his service records, he was 21 years of age, five feet nine inches tall with a dark complexion, black eyes and dark hair. His regiment was mustered into service on October 15th, with William as the first lieutenant of the company. His occupation was listed as "lawyer." On October 19th, the 6th left Vermont for the front.

On October 24th, the Sixth Regiment arrived at Camp Griffin outside Washington, where it joined four Vermont Regiments (the 2nd, 3rd, 4th, and 5th) to form the Vermont Brigade. The Vermont Brigade was assigned to General William F. Smith's division of the Fourth Army Corps, under the command of General Erasmus D. Keyes.

On June 17th, he became ill with typhoid fever and was hospitalized. He was subsequently captured while in the hospital at Savage Station, Virginia on June 30th. He was imprisoned by the Confederates in Richmond, Virginia. On July 18th, he was paroled at Haxall's Landing, James River, Virginia.

On July 26th, he was examined by a physician in Baltimore, who determined that he was not fit for duty because of his poor physical health. That same day Capt. Reynolds requested a leave of absence to return to Vermont and to recover his health, which was granted. Meanwhile, the 6th was removed to the Maryland campaign of September. The Regiment wintered at White Oak Church.

The third year of the war saw the 6th move throughout Virginia. The regiment participated in the Chancellorsville Campaign of 1863 and saw action at Marye's Heights and Bank's Ford. On July 1st and 2nd, the 6th Regiment marched thirty miles to Gettysburg and served as a rear guard. On July 10th, the 6th engaged Lee's retreating troops at Funkstown, Maryland.

In August, the 6th Regiment was ordered to New York City to quell antidraft riots. The 6th Regiment camped at Tompkins Square. In mid-September, the 6th rejoined the army in Virginia at Culpepper Court House on September 23, whereupon it participated in the October campaign.

During November and December, Capt. Reynolds returned to Vermont for recruiting service.

In December, the 6th Regiment took up winter quarters near Brandy Station, Virginia. On December 19th, the 6th Regiment observed the execution for the first time of two Vermont soldiers for desertion: John Tague of the 5th Vt. Vols. and George E. Blowers, of the 2nd Vt. Vols.[1]

Captain Reynolds returned to field duty on January 9th. On April 19, Capt. Reynolds was discharged from the 6th Regiment. On April 22nd, the Governor of Vermont appointed him Major of the newly formed 17th Regiment. Lt. Col. Charles Cummings, who had served with distinction in the 16th Regimentwas his superior.

At 2:00 a.m. on May 6th, the 17th advanced along the Plank Road from Germanna Ford to the Wilderness. At sunrise, the 17th was in line of battle on the right of the Brigade. At 9:00 a.m. the 17th advanced through a dense pine thicket ("having to crawl about 50 yards on hands and knees") and drove the Confederates from behind a rail fence, which they had occupied in the morning. On that date Col. Cummings was wounded in the scalp by a mini-ball, whereupon Major Reynolds became the commanding officer of the 17th.

Thereafter, at about 2:00 p.m., a charge was ordered, which resulted in the driving of the Confederates from their position. Two hundred prisoners were taken by the Brigade. As Major Reynolds reported about the first battle of the 17th the following day in his official report: "I take pleasure in saying, no colors were advanced beyond those of this Regiment." He then added:

It gives me great pleasure to acknowledge the services of the staff officers of the regiment, and also to add that the coolness, courage and firmness of the line officers and enlisted men of the Regiment excite my warmest admiration. When it is remembered that the regiment had been but fourteen days in the field, so constantly marching that it had been drilled as a battalion but twice, and that, owing to the prevalence of measles in the Regiment, it numbered only 313 muskets on the morning of the battle, I believe I may submit its record without comment.[2]

On May 10th, the 17th, under the direction of Major Reynolds, advanced toward Spotsylvania and took up position before the Confederate entrenchments. At 5:00 a.m. on May 12th, while advancing, the 17th came into conflict with the Twenty-Sixth Georgia Volunteers and after two hours ran out of ammunition (40 rounds per man) whereupon it withdrew twenty paces after being relieved by the 48th Regiment of the Pennsylvania Volunteers. After receiving new ammunition, the 17th returned to the front at 11:00 a.m. on that same day and held its position until May 19th, whereupon it relocated 3 miles farther to the left.[3]Col. Cummings renewed command of the 17th on May 23, 1864. It captured about 50 of the Twenty-Sixth Georgia Volunteers.

On June 12th, the 17th left their entrenchments at Cold Harbor and reached Petersburg and was the only Vermont regiment there. At noon on June 16th, the 17th was drawn into battle, with the Seventh Tennessee, Col. Fulton's Brigade, Bushrod Johnson's Division, Buchner's Corps., whose colors it captured. [4]

On Saturday, July 30th, Major Reynolds, age 24, led the 17th in the assault made by the Ninth Army Corps in the Battle of the Crater at Petersburg, Virginia. After the explosion of the now infamous mine, the 17th entered the Confederate earthworks and came under fire from enemy artillery. The Union troops were quickly thrown into confusion. The Confederates counter-attacked the 17th in the Confederate trenches and the 17th sustained heavy losses. The 17th, which took 120 men into battle, had ten men killed, forty-six wounded and eighteen declared missing. Of the eight commissioned officers who went into the battle, not one returned.

Major Reynolds was shot in the trenches by a musket-ball in the left breast as he attempted to rally his troops.[5]In his final words, Major Reynolds asked for water, pointed to a ring on his finger and then passed away. His body was not recovered. As with his fellow Vermonters, his courageous example and spirit live on.

FUNERAL OF MAJOR REYNOLDS. - The funeral services of Wm. B. Reynolds, Major of the 17th Vt., were held in the church at West Milton yesterday (Wednesday) afternoon and were very fully attended. Besides the relatives and townsmen of the deceased, many of his friends from other towns and some of his comrades in arms were present. Among those latter was Gen. Stannard, now spending a few weeks in Vermont to recruit strength and recover from a painful wound.

The funeral discourse was delivered by Rev. O.G. Wheeler of Grand Isle. He selected as a text the 5th and 6th verses of the 137th Psalm. If I forget thee O Jerusalem let my right hand forget her cunning. If I do not remember thee let my tongue cleave to the roof of my mouth; if I prefer not Jerusalem above my chief joy. From these words, "the outgushing of generous patriotism" he deduced as his theme "Patriotism and its demands," - a theme appropriately considered on such an occasion, where a lesson was to be drawn from the life, and more especially the death, of one who fell fighting for his country. Patriotism, one of the noblest emotions of which the heart is capable, can be felt rather than defined. It is that feeling with which home and its surroundings are regarded, extended, so as to embrace not a neighborhood a town or a State, but our entire country. This patriotism is the patriotism of New England and the North, as distinguished from the patriotism of the South; the one regards the interests of the Republic and the Constitution as supreme; the highest aspirations of the other have reference only to the welfare of the individual "Sovereign State." The one is a large and generous patriotism, the other is narrow and restricted. The contest between these, and not any of the other issues that have been presented, is the real struggle of to-day. In such a contest the true patriot cannot hesitate as to the part he shall bear. He must be ready to sacrifice all things - if need be his life, in defence of a righteous cause. To find such patriotism exemplified, we have to look to the heroes of the revolution, or to the veterans of the present war - those who enlisted in the beginning of the contest, when patriotism and not merely mercenary motives prompted the soldier; we have to look at those now lying in our hospitals, who, after months of service in the camp, and other weary months of pain; of sickness and of suffering, still retain the heroic spirit with which they enlisted in their country's cause. We find such a patriotism exemplified, in the character of many of those who have fallen, and it is not too much to say most fully exemplified, in his character, whose recent death is so lamented, and whose memory is so fondly cherished.

Wm. B. Reynolds, enlisting as a private soldier, went out as 1st lieutenant of Co. I the 6th Vt., proved himself a brave man in many hard fought battles and had risen to the honorable position of major of the 17th Regt. He fell while in command of the regiment and leading them on in the assault made at Petersburgh after the explosion of the mine. It was in the thick of the fight, when the forces opposed to him were gaining an advantage and had demanded his surrender. Although the odds were much against him he refused to comply with this demand. This refusal cost him his life. He was shot down, the ball passing through his body, and the wound proving fatal almost immediately. He had only strength to whisper a few words to a comrade and to indicate by a gesture that he wished a ring and other tokens of remembrance to be saved from the rebels and carried to his friends. His last wishes were complied with; when the enemy pushing on gained the field, and he was buried within the rebel lines.

Words appropriately sung at his funeral and found with letters of farewell to friends at home, in his haversack, seem as fitting as if written in his memory.

"How blest the brave who sink to rest By all their country's wishes blest."

The religious character of Maj. Reynolds gave depth and intensity to his patriotism. He was known and referred to by acquaintances at home and associates in the army, as a Christian man, one who was prepared for the summons that called him from his post of duty.