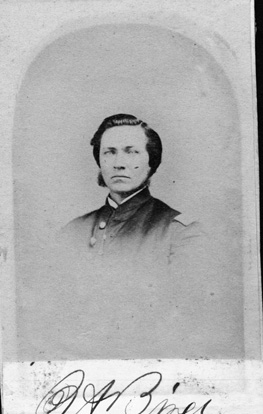 [Written for the Vermont RECORD] Capt. Riley A. Bird, Co. A, 6th Vermont Volunteers was killed in battle Thursday, May 5, aged 28 years. He was wounded in the leg early in the day, and again later in the forehead, but did not leave his company, and finally received a death shot through the breast.

He was the son of Frederick A. Bird of Bristol, and was born in that town February 10, 1863. He remained upon his father's farm until the age of 21, and then occupied himself as jeweler until he enlisted in the fall of 1861. He served as first lieutenant until promoted to the captaincy, March 1, 1862, on the resignation of Capt. Parker. After the battle of Antietam he was in the hospital for some weeks from rheumatism. From this cause he was absent from his command during one engagement, the only time his company ever missed their gallant leader on the battle field, where, alas, their depleted number must always miss him hereafter.

Capt. Bird had an enviable reputation for efficiency and bravery. His warlike propensities were no doubt nourished in his youth by hearing the Revolutionary tales of his grandfather, Joseph Bird, who entered the army at the age of 16 as a waiter to Col. Brewer. He afterwards acted as the waiter of Dr. Binney, a surgeon in the army, whose daughter he subsequently married. He was with the army at Valley Force, and soon afterwards took the field as a soldier. At the battle of Monmouth he was wounded in the right arm by a ball which lodged in his side and remained there until the day of his death. He was also captain of a company in the battle of Plattsburgh. He died at the residents of his son in Bristol, at the age of 93 years.

The writer once met captain Bird in camp, and remembers his handsome carriage and pleasant, courteous address. The terrible battle of the Wilderness has made Vermont's glory sure for long years to come. While her fame endures, the memory of those gallant men who bought it with their blood will be green as the spring glory that now covers their lasting monuments--the Green Mountains!

Captain Riley A. Bird (of Bristol) of Company A, a soldier of rare merit, especially distinguished himself on the first day, and died before its close. He was first wounded in the head, and advised to go to the rear, but with the blood streaming down his face he sternly and even angrily refused, saying that it was "the business of no live man to go to the rear at such a time." soon a second musket ball struck him in the thigh. He retired a few steps, sat down, took off his sash, bound it round his leg, and then resumed his place in the line. A third bullet pierced his heart, and he fell dead with the word which he was cheering on his men cut short upon his lips.