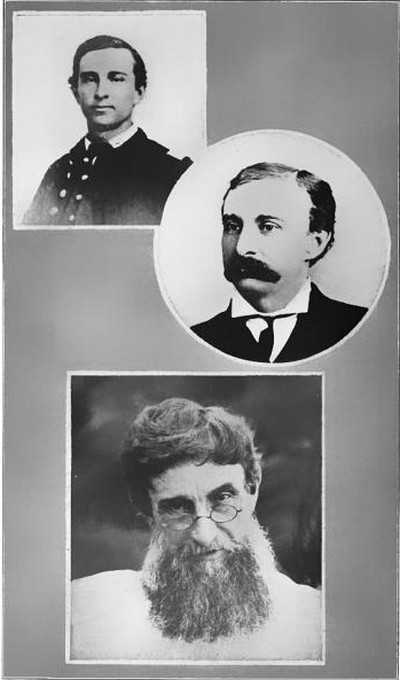 Brother Joseph Dutton, of Kalawao, Molokai, the indefatigable worker amongst the lepers during the past thirty years, is a veteran of the Civil War. He was an officer connected with the Army of the Cumberland, and was then known as Lieut. Ira B. Dutton, of Co. "B," 13th Wisconsin Volunteer Infantry, and had a splendid record as a soldier.

He was born on April 27, 1843; his boyhood was passed at Janesville, Wisconsin, and in his youth he displayed the same excellent qualities as he did in the Army, and has done during the past thirty years at the Leper Settlement, Molokai, Hawaii.

In the summer of the year 1861, Dutton enlisted in the then recently formed Co. "B," 13th Wis. Vol. Inf. He served the length of the war, some four and a half years. The record of his army service is as follows:

Col. A. Wills' testimony of Lieut. Dutton's value as a soldier is herewith given:

"We were in the Army of the Cumberland together as officers. Dutton was a handsome fellow, and one of the best and bravest oflicers in the army. He was complimented in official orders for bravery. At the close of the war in 1865, Dutton was mustered out of the service, and I then engaged him as one of my superintendents in the locating and purchasing of National Cemetery lands in the Southwest. He was later engaged in caring for and transporting the bodies of the heroic dead of the battlefields, now interred in the cemeteries at Corinth, Mississippi, and Pittsburg Landing, Tennessee. After leaving the Government service, Dutton was employed by the Louisville and Nashville Railroad Company at Memphis, Tennessee; upon leaving the service of the company he engaged in religious work, became a convert to Catholicism, and soon after entered the Trappist Monastery at Gethsemane, Kentucky."

Brother Joseph Dutton came to Hawaii in the year 1886, and in the early afternoon of Thursday, July 29th, of that year he arrived at Kalawao,'calling at my house on his way to the Catholic Mission premises. He took up his residence with Fr. Damien, later occupying a small house near the residence of the priest. Since his arrival, now nearly thirty years ago, Brother Dutton has never once set his foot outside the boundaries of the Leper Settlement; but he could leave, if he so desired - he is not a leper. The Leper Settlement is under the control of the Board of Health of the Territory of Hawaii, and there is no law or statute on its books that can compel a non-leper to remain at the Leper Settlement, if said person desires to leave, move, or reside elsewhere. Any nurse, kokua, brother, sister, or other employee who is not a leper, is a free person. There is no such condition as involuntary confinement for a well person, but such statements find frequent place in certain newspapers.

The day of his arrival Br. Dutton took luncheon with me, and I scanned him carefully. He had come afoot from Kaunakakai, a port on the south side of Molokai, about nine miles from Kalawao. It is a hot, dusty, fatiguing trip, even on horseback, yet Dutton showed no fatigue nor travel-stained clothes. He wore a blue denim suit, which fitted his well-knit, slim, lithe, muscular figure. He stood about five feet seven inches tall, had dark brown hair and grayish-blue eyes, low voice, placid features, and pleasant smile; he was reserved and thoughtful, had nothing to say about his past life nor the reason for his seeking seclusion and work at Molokai, and turning his back on the world forever.

Brother Dutton soon demonstrated that leprosy had no power to instil fear in his mind. For many months after his arrival, his daily routine, from daybreak to dark, was cleaning and dressing the sores, ulcers, and other skin troubles; removing carious and necrosed bone - all of the type that leprosy inflicts on mankind. He was methodical and accurate in his work, and quick to learn the rudiments of medicine and surgery. I started him dressing the wounds and sores of the leper proteges of Fr. 'Damien, and showed him (Dutton) the method of affixing dressings by properly applied bandages and other appliances. Within a very short period he had become so apt that he surpassed his teacher; in brief, "whatever Br. Dutton undertook to do he did it well."

He always seemed to find time to attend to the numerous duties that fell to his lot, the more his work expanded the better he seemed to like it. He possessed a DIVINE temper, nothing could ruffle it, no vulgar or angry speech ever emanated from his lips; although his clothes were cheap, rough, and uncouth, he was always dignified and commanded respect. He never ceased to be neat and clean, and I have always believed this was his salvation and protection from leprosy. I enumerate some of Br. Dutton's manifold duties performed daily: Fr. Damien's companion, secretary, servant, nurse, and other menial work, sexton, sacristan, verger, purveyor for Fr. Damien's Homes and his household, hospital steward, dresser, clinical clerk, later manager of the Baldwin Home, sanitary engineer, architect, landscape gardener-the site of the Baldwin Home was formerly an unsightly pile of rocks, note the transformation, as shown in the picture. Br. Dutton was also postmaster. For years, single-handed and alone, he filled well all of the above offices.

Br. Dutton will be seventy-three years of age on April 27, 1916. His services have been invaluable to the Board of Health and all the lepers; his earthly reward has been board, lodging, and a few dollars a month, but his greatest and most cherished recompense has been the love and esteem of those afflicted persons he has had charge of, who number at the Baldwin Home alone 1,148 to July, 1915. This Home opened in the year 1894, for single men and friendless boys, comprises forty-five houses, and has an excellent sewerage system. The grounds are well kept-have a forest of 5,000 eucalyptus trees, a large number of Samoan cocoanut trees, all planted under the supervision of Br. Dutton.

During his thirty years of residence, great changes have taken place; grass houses, lean-tos and shacks have given place to comfortable cottages with neat gardens; the meagre water supply has been supplanted with an abundant and never-failing source, sufficient for a modern city. These improvements, begun in the year 1887 (due in the main to the energy and forcible personality of the then Minister of the Interior, Lorrin A. Thurston, ex-officio member of the Board of Health, and in later years-the nineties to William O. Smith, many years president of the Board of Health), are still in progress, until the Leper Settlement has reached a degree of efficiency, that it is unquestionably the foremost institution caring for lepers in the Whole world.

I add, in concluding Br. Dutton's life history, he has always been careful, cleanly, and prudent whilst in contact with leprosy; and after thirty years of intimate association with the disease he remains unscathed.