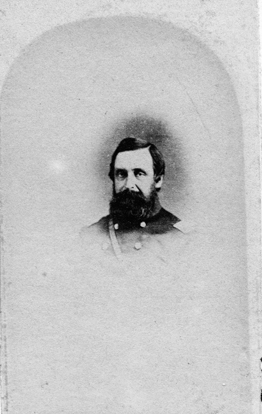 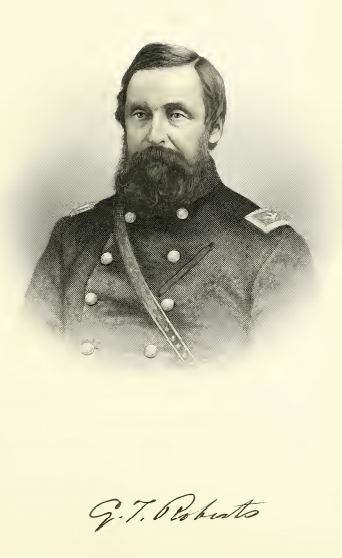 ROBERTS, COLONEL GEORGE T., was born in the town of Clarendon. Rutland county, Vt., on the 3d day of October, 1824. He belonged to a family of military traditions on both sides, being the third son of the late Benjamin Roberts, of Manchester, Vt., and a grandson of General Christopher Roberts of Revolutionary memory. His mother's maiden name was Sophia Hodges. She was the third daughter of Dr. Silas Hodges who served as a surgeon in the Continental army, and was for some time in the military family of General Washington. When about four years of age his parents removed to Manchester, in which town he spent most of his boyhood. He was naturally fond of study, particularly of mathematics and astronomy, and acquired a very good education at Burr Seminary, a popular institution of learning in Bennington county.

Some years previous to the breaking out of the great Rebellion he was extensively engaged in superintending the construction of railroads in the West, and at the time of entering the service of the country was the agent and manager of the marble quarries at West Rutland, of which his brother-in-law. General H. H. Baxter, was the principal owner. In 1861 he was a lieutenant in the Rutland Light Guards, which went out as one of the companies of the First Vermont Regiment. He served in the field with that regiment until the expiration of its term of service. He afterward took an active part in recruiting the First Vermont Regiment of Cavalry, and was offered a position in that organization, which he declined. When the Seventh Regiment was organized and mustered into service in February, 1862, he was offered its colonelcy by Governor Holbrook, which offer he accepted.

The foregoing very brief sketch of Colonel Roberts's life was written by a relative of his; but it needs supplementing in order that the reader may gain an intelligent conception of his character. The history of the Seventh Regiment has already been given in earlier pages of this work. Its gallant colonel was destined to share in its hardships and victories but a few short months. The battle of Baton Rouge was fought on the 5th of August, 1862. The following account of that part of the engagement directly connected with the fall of Colonel Roberts is from Colonel William C. Holbrook's history of the Seventh Regiment: --

"When the regiment resumed its original position the action was raging with great fury directly in front of our camp and that of the Twenty-first Indiana. Owing to the fog which had not yet lifted, and to the smoke which was constantly increasing, objects could not be distinguished ten yards ahead. Although the regiment was under a terrible fire, Colonel Roberts wisely hesitated to give the order to commence firing, as he was apprehensive that the Indiana regiment might be in his front. At this moment General Williams rode up and peremptorily and in an excited and somewhat brusque manner, instructed him to open fire. The colonel was, of course, obliged to give the order, but did so very reluctantly. Before many volleys had been discharged an officer appeared and exclaimed that the fire of the Seventh was affecting the Indianians. The colonel promptly gave the order to cease firing. This was his last command, for he immediately fell from a severe wound in the neck. While being carried to the rear he was again hit in the thigh by a minnie ball. Dr. Blanchard soon reached the spot to which the colonel had been removed' and gave him all the medical aid possible. Having no ambulance, a one-horse cart or dray was obtained, in which uncomfortable conveyance on a thin litter of hay, he was taken to the hospital. I met him on the way as I was re- turning from the picket line on the right flank. He was cheerful and bright, although seemingly suffering some pain. I expressed much sorrow that he, of all others, should have been stricken. He^ replied that he did not consider his wounds serious, and hoped soon to be on duty again. The wound in the thigh proved fatal, the ball having glanced upwards, penetrating the vital organs. Two days afterward he quietly, and apparently painlessly, passed from among the living." The death of Colonel Roberts caused the most profound sorrow throughout Rutland county, and that his character and eminent services were appreciated in the field is indicated by the following extract from an article published in the New Orleans Delta at the time of his death: --

"The Seventh Vermont Regiment, which had just returned from severe service at Vicksburg, participated in the battle of Baton Rouge. It is sufficient evidence that they were at their post discharging faithfully the trust reposed in them, that their gallant colonel, George T. Roberts, fell mortally wounded in the thickest of the fight. He was a true patriot and an honorable, high-minded man. He fir.st went into the service as a lieutenant in Company A, of the First Vermont Volunteers. When the Seventh was called for he was tendered the colonelcy, and in every particular has proved the selection a good one, and though dying in a glorious cause. his loss will be severely felt, both by his regiment and his many friends in his native State where he was so well and so favorably known."

In an article on his death the editor of the Rutland Herald used the following word: " So long as heroism is admired and patriotism loved, will green garlands of affectionate remembrance be laid upon his honored grave.

The remains of Colonel Roberts were brought home to Rutland, where they were interred in the presence of a large concourse of citizens and their families. In addition to this customary mark of respect to the eminent dead, the citizens of the town assembled in meeting at about that time and unanimously passed the following resolutions : --

WHEREAS, We, the citizens of Rutland, in town meeting assembled, have learned with the deepest sorrow of the death of Colonel George T. Roberts, our friend and fellow-townsman, while gallantly leading his regiment in the memorable battle of Baton Rouge, therefore —

Resolved, That in the death of Colonel Roberts Vermont is called upon to mourn one of her best and bravest officers, and Rutland one of her most loved and honored citizens.

Resolved, That the profound sympathies of this meeting are tendered to the mourning relatives of the deceased in this their deep affliction, and as our late fellow townsman has given all he had, even his life, for us and for his country, we give to his memory our tears and a grateful and lasting recollection of his patriotism and gallantry. Colonel Roberts has been described as " an eminently just and large-hearted man in the truest sense," which, perhaps, expresses his prominent characteristics fully.

Our community was shocked and grieved by the sad intelligence of the death of Col. George T. Roberts of the Seventh Vermont Regiment. The intelligence is accompanied with no particulars further than that he was mortally wounded in the desperate conflict at Baton Rouge, between the forces of Breckinridge and the Union troops, whilst gallantly , making a charge upon the enemy while at the head of his regiment. This occurred on the 5th inst., as we learn, and Col. Roberts died on the 7th instant, - two days after the wound was received. We are informed a private dispatch states that the Vermont Seventh made one of the most brilliant charges of the whole war, and covered itself with glory. But it is painful to think that the noble commander is cut off, ere his career of usefulness and honor had fairly commenced. Like the lamented Ransom in Mexico, and Baker at Ball's Bluff, he fell with is face to the foe, and in the fearless discharged of his duty. So long as heroism is admired, and patriotism loved, will green garlands of affectionate remembrance be laid upon his honored grave.

The remains of Col. Roberts were to be sent home, and their arrival may be expected soon. The melancholy event will be duly honored by our people.

The following dispatch announcing the death of Col. Roberts, was received by Gen. Baxter yesterday afternoon.

Gen. H.H. Baxter: The Seventh Vermont helped achieve a glorious victory at Baton Rouge on the 5th instant, but our gallant Colonel fell mortally wounded in the thickest of the fight. He died on the 7th inst. His body will probably come by the Blackstone, the last of the week. Can you be here to receive it? (Signed) H. M. Frost, Chaplain.