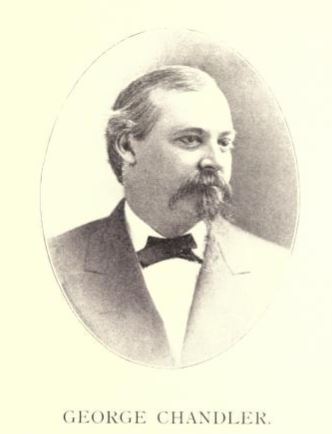 George Chandler was born in Danville, Vt., 6 January 1835; took his preparatory course at Meriden, N. H., and entered Dartmouth college. At the beginning of his junior year he came to the University, and appears in the catalogues as from Concord, N. H. He read law after graduation with Washburn & Marsh of Woodstock, Vt., and in 1857 went to St. Louis and practiced as a member of the firm of Noble, Denison & Chandler. Two or three years later Noble and Chandler were in partnership at Chicago. Not long after he formed a connection with the Hon. William Goudy, which lasted till his death.

Mr. Chandler was of modest and retiring disposition, preferring the labors of the office to the public duties of the advocate. He was highly regarded by his brother lawyers. He proved his patriotism by taking an active part in the war of the rebellion, having been commissioned first lieutenant in the 88th Illinois infantry. The record of his service is an honorable one. He died in Chicago 2 November 1886.