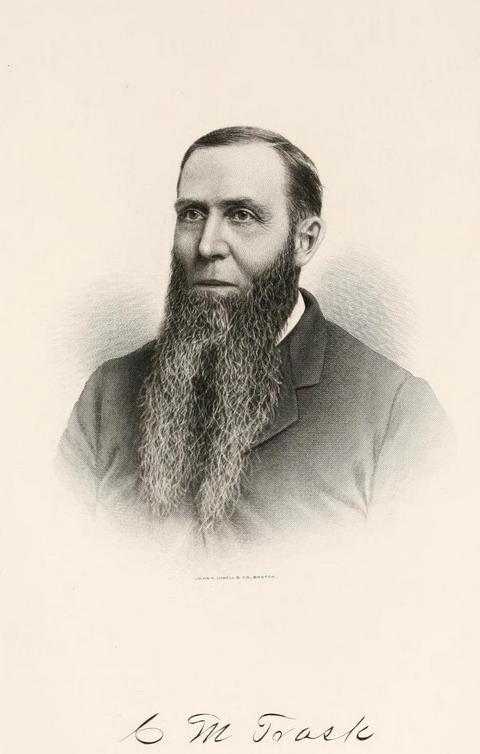 CHARLES M. TRASK, M. D.
Late of White River Junction, Vt.
TRASK, CHARLES M. Co. D.; F. and S.; b. Brookfield, Vt.; age 24; res. Stewartstown; enl. Nov. 28, '61; must, in Jan. 6, '62, as Priv.; app. Hosp. Steward, Feb. 8, '63; 2 Asst. Surg. June 1, '63; disch. Dec. 27, '64. Died June 27, '91, White River Junction, Vt. (Record, Ayling's Register, 1895, p. 274.)
Surgeon Trask was born in Brookfield, Vt., November 30, 1836, and was the son of William and Sarah Mitchell (Clark) Trask, and a grandson of Hon. William Dodge Trask, an English emigrant settling in Beverly, Mass. His preliminary education was received in the common schools of Vermont and Derby (Vt.) Academy. His professional education commenced in the spring of 1857 at Stewartstown, N. H., under the direction of Dr. Worthley of Stewartstown and Prof. Walter Carpenter of Burlington, Vt. He attended three courses of medical lectures in Burlington and New York and was graduated M. D. from the medical department of the University of Vermont in June, 1861.
The commencement of the War of the Rebellion found Dr. Trask a medical student in the town of Stewartstown, from which place he enlisted as a private in Company D, Fifth New Hampshire Volunteers, the 28th of November, 1861. It was understood that he was to be appointed hospital steward, but for various reasons he did not receive that appointment until February 8, 1863. June 1, 1863, he was commissioned second assistant surgeon of the Fifth, in which position he served until mustered out of the service December 27, 1864.
After more than three years' service in the United States Volunteers he returned to Stewartstown, N. H., where he practiced medicine for two years; he then removed to Wells River, Vt., where he remained until 1872, when, on account of failing health, he entered the drug business in Boston. In 1882 he removed to White River Junction, Vt., carrying on the same business until his death, which occurred June 27, 1891, from disease contracted in the United States service.
Married in the spring of 1866 to Lewellen Morrison, who died April 11, 1869; and in 1882 he married Susie Stimpson, who survived him and now resides in Massachusetts.
No children.
His biographer says of him:
"He was a faithful, noble man who performed every duty without a murmur. Probably no man in the Fifth did his duty more fully, without any desire for promotion, sensational attention, and display, than did Dr. Trask. He was honest, able, kind, attentive, and cheerful under all circumstances. As a physician and surgeon, he possessed all those qualities that command the love and respect of officers and men. His death occurred in the very prime of life, beloved and respected by all who knew him. His place of business was always the resort of those who knew him best in the service or later in his business life. He was made a Master Mason at Point Lookout, Md., in the winter of 1863 and 1864, in the Masonic lodge belonging to the Fifth New Hampshire Volunteer Regiment, by his friend and comrade and almost constant tent-mate, Dr. William Child, then Worshipful Master of the lodge, he was an honest man, an agreeable companion, and a true patriot."

WHITE RIVER JUNCTION, June 29. - Dr. Charles M. Trask, of the firm of C. M. Trask & Co., of this place, formerly a practicing physician at Wells River, Vt., for about 10 years, and afterwards engaged in the drug business in Boston, Mass., from 1872 to 1882, since which last named date he has been engaged in the same business here, associated with Charles S. Wilson a part of the time, died Sunday morning of epilepsy after a very short illness.

Dr. Trask was assistant surgeon of the Fifth regiment, New Hampshire volunteers, and was a member of Abraham Lincoln post No. 85, department of Vermont, of which post he has been quartermaster for most of the time since the same organized. The funeral will be held on Wednesday afternoon at 3 o'clock.