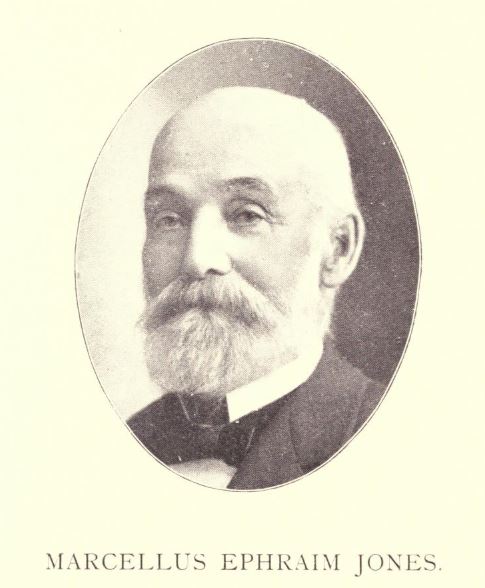 COMPANION Marcellus Ephraim Jones was born at Poultney, Vermont, June 5, 1830, and died at Wheaton, Illinois, October 9, 1900. He was the oldest of nine children, three of whom with his mother, now over ninety years of age, survive him.

He remained at home until he was seventeen years of age, when he started for the West, stopping for nearly two years in Western New York and then in Ohio. In 1850 he reached Chicago and engaged for four years in the business of building. He then went to Weyauwega, Wisconsin, and put up a large sash, door and blind factory. While living there he married Miss Sara Reese, May 1, 1856, who died June 13, 1858, leaving him one child, a boy who lived until he was seven years of age. After the death of his wife, and the burning of his factory Companion Jones moved to DuPage County, Illinois, in the fall of 1858, and settled at Danby, now Glen Ellyn, and went to work at his trade as carpenter and builder.

At the breaking out of the Rebellion in 1861, he laid down his tools and enlisted, assisting materially in raising Company E, Eighth Illinois Cavalry. The boys of the company wanted him to take an office (sic) but he replied he knew nothing of military science and tactics, and went into the army as a private. He came from a race of fighting people. It was his grandmother's brother, General Stark, who at the battle of Bennington, during the war of the Revolution, said to his boys just before the battle, "Boys, we conquer to-day or Mollie Stark is a widow." With this kind of blood in his veins, it is very evident to us how easy it was for him to gradually become promoted—September 5, 1861, to First Duty Sergeant; December 5, 1862, to Second Lieutenant; July 4, 1864, to First Lieutenant; October 10, 1864, to Captain. He was in every movement of his regiment, except for seven months when at General Sumner's headquarters. History accords to him the honor of firing the first shot at the battle of Gettysburg. On that memorable morning, seeing the enemy approaching, he took the carbine from one of his Sergeants and fired the shot that opened the battle.

He was mustered out of the service in Chicago, July 17, 1865, and returned to Wheaton.

September 1, 1864, while at home on a furlough, he married Miss Naomi E. Meacham, and for the last thirty-six years she has been at his side, sharing his joys and sorrows. From the close of the war until 1872, they resided in Wheaton; that year they went to Colorado, where they remained four years, again returning to Wheaton, where they have resided continually since. He has filled several township and city offices. In 1882 he was elected Sheriff of DuPage County. In 1890 was appointed postmaster of Wheaton, which office he held until the spring of 1895.

Our deceased Companion was a charter member of E. S. Kelley Post, 513, Department of Illinois, Grand Army of the Republic, and for a number of years its Commander. Also a member of Wheaton Lodge, No. 269, Ancient Free and Accepted Masons, and its Master for several years. He was a member of Euclid Chapter, No. 13, Royal Arch Masons, of Gebal Council, No. 81, R. and S. M. He also belonged to the Knights of Pythias and the Odd Fellows. He joined this Commandery February 10, 1898, and was a regular attendant at all its meetings. He was an active member of the Universalist Church.

As a soldier and citizen, it can well be said of him that in army, official, and private life, his conduct was always above reproach. He was true to every duty, faithful to every trust. What more can be said of any one?

Deeply sympathizing with his widow and friends, we with them deplore his loss, and shall ever hold his memory in respect and esteem.

Source: Memorials of deceased companions of the Commandery of the State of Illinois, Military Order of the Loyal Legion of the United States, (Chicago, 1901), pp. 560-562.