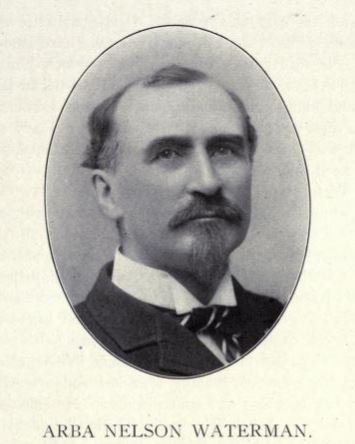 At the academies and schools in Peacham, Johnson, Montpelier and Georgia, Judge Waterman began his education and graduated in the class of 1853 from Norwich University. Determining upon a legal career he selected the Albany school and after pursuing his studies there was admitted to the bar in Albany, N. Y., in 1861. He soon went west and the year of his admission to practice located at Joliet, Ills.

Upon the breaking out of the war he entered the army, enlisting in Co. G, 100th Ill. Vols. as a private, in 1862. He was engaged in the campaign against Bragg in the fall of 1862 and was in the battles of Chickamauga, Dalton, Altoona and Houston. At Chickamauga he was severely wounded and had his horse killed under him. Judge Waterman's military career was full of honor and his services received recognition by promotion to captain of his company and later as lieutenant-colonel of the regiment.

Returning west at the close of the war, in 1865 he began the practice of his profession in Chicago, which he continued with success and distinction. In 1886 he was elected judge of the circuit court, and in 1890 received the appointment of judge of the appellate court.

In politics he is a Republican. In social life his varied tastes and broad acquirement are indicated by his membership in various societies. He was in the Philosophical, Law, and Social Science congresses of the World's Columbian Exposition. He is a member of the Psychical Research, and the Philosophical societies, and of the Union League, Literary, Alliance, and Irving clubs. He is a comrade in U. S. Grant Post, G.A.R., in the Loyal Legion, and the Veteran Association.

Judge Waterman was married, in Chicago, in December, 1862, to Ella Hall, daughter of Samuel and Rebecca Hall.