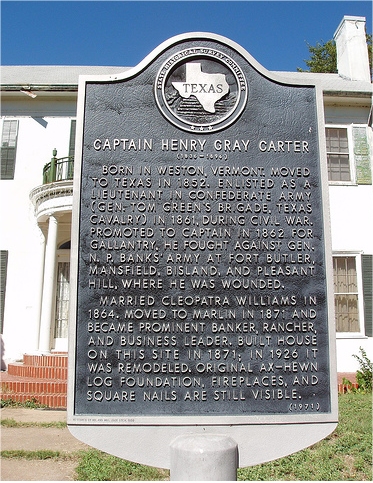 Henry Carter was born in Weston, Vermont on October 11, 1836, the son of Dr. Seneca and Mary (Gray) Carter. When Henry was nine years of age, his mother died, and his father later married his mother's aunt, Azubah Carpenter, in Keene, New Hampshire. The family moved to Barre, Massachusetts where Seneca Carter was a part owner of the Nichols and Carter Emporium for three years. Henry was in school during these years at the Chester Academy, but was in Barre periodically. In 1849, his step-mother/great aunt and her baby Freddy died within ten days of each other, purportedly of dysentery, but local historians believe it was actually cholera.

Dr. Carter returned to Weston and hired a Boston firm to pack his belongings. He left Henry in school at Chester where he boarded with relatives, the Sargeants. Dr. Carter moved to Galveston where he became publisher of the "Galveston Journal". In 1851, he returned to Vermont and got Henry, and they eventually moved to a farm in Milam County, Texas where Seneca died in 1858.

Henry remained on the farm until the war broke out. He enlisted in the Confederate States Army and was mustered in as a Second Lieutenant, Company D, Fourth Regiment of the Texas Cavalry, Green's Brigade. In 1862 he was promoted to Captain. He fought in many battles in New Mexico and Louisiana. On April 9, 1864, he was wounded in the Battle of Pleasant Hill, receiving a shot through his left lung that exited under this arm. He remained in a Field Hospital for three months and then went home to recuperate. He went on to marry and raise a family and had several businesses.

One of the things that is interesting in Henry's Civil War story is that shortly after the war (and frequently for the rest of his life), he traveled to Vermont and visited his Carter, Gray, Carpenter, and Sargeant relatives. They seemed to welcome him with open arms. His grandfather, Dr. Henry Gray, died in Vermont in 1863 and remembered Henry in his will. They all seemed to understand that he chose to fight with the state of his adoption.

When Henry and Seneca moved to Texas, they brought a desk full of old family letters and papers. Henry added letters throughout his life, including his Civil War correspondence, to the collection, and therefore, the family has a wealth of primary information.

These people are all very alive to Ann Carter Dennis, of San Antonio, Texas, great-granddaughter of Henry Gray Carter, who contributed the information for this article.