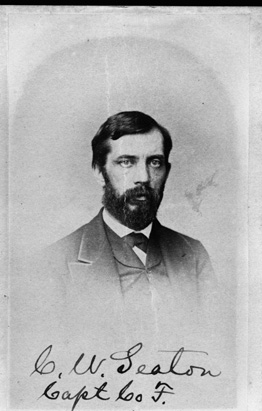 Charles William (sic) Seaton was born in Norfolk, St. Lawrence County, New York, on July 22, 1831, the son of Charles Morris and Mary Hooker (Williams) Seaton. He attended academies in Champlain and Malone, New York, and graduated from Middlebury College, Vermont, in 1857. He was married and had one son and two daughters.

He taught in academies at Monson, Massachusetts, and Keeseville, New York. Early in the Civil War, he recruited Company F, First Vermont Sharpshooters and was commissioned its first lieutenant. Later he was made captain. Resigning his commission during the winter of 1863-64, he became an agent in the pension department of the Sanitary Commission. Later he was made chief clerk of the United States Pension Office. Mr. Seaton was a chief of division for the Ninth (1870) Census and the superintendent of the New York State census of 1875. He was appointed chief clerk of the Tenth (1880) Census, became Superintendent on November 4, 1881, and served until March 1885, when the Census Office was abolished. He invented a tallying machine used in the Censuses of 1870 and 1880 for tabulating data. He also invented in 1884 a matrix printing apparatus for Census work.