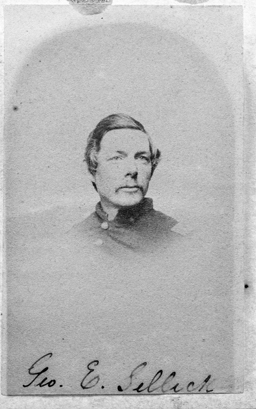 Brattleboro, Sept. 17. - George Eaton Selleck, a highly respected citizen of this town, died yesterday at his home, 41 High street, after a brief illness, aged 79. He was born in Middlebury, June 24, 1834, the son Myron and Sarah Blinn Selleck. He learned the printers' trade in that town with the Middlebury Register. He came to Brattleboro in 1855 and established a job printing office in 1857, which he conducted until 1881, when E.L. Davis became associated with him. He sold this to his partner in 1898, and retired from active business.

He served in the 8th Vermont regiment in the Civil war and was discharged with rank of first lieutenant. He was a member of Sedgwick post, G.A.R.

He is survived by his wife, one daughter, Miss Kate Selleck of this town, and several nieces and nephews in Middlebury. The funeral will take place on Thursday afternoon at the Congregational chapel.