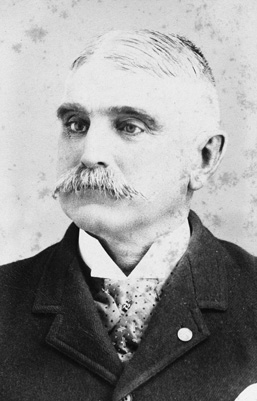 Harley G. Sheldon of West Rutland, a Civil war veteran and well known farmer of Rutland county, died suddenly at his home yesterday morning. He had been in his usually good health until about 10 minutes previous to his death when he had an attack of heart trouble. He was 76 years old.

Mr. Sheldon was born September 23, 1840, the son of Lorenzo and Mahala Smith Sheldon. His father was one of the pioneer marble men of the state. Mr. Sheldon graduated in 1857 Riverside institute at Auburndale, Mass., and the same year joined the Rutland Light guard. He responded to the president's first call for volunteers for the defense of the Union and a little later engage in the battle of Bethel.

When his first enlistment expired he joined Company H, 14th Vermont regiment, and was mustered into service October 21, 1862, as first sergeant. The following January the first promotion in the regiment was offered Mr. Sheldon but he declined the honor. On March 12, 1863, he was made second lieutenant in Company K. In December, Mr. Sheldon assisted in the repulse of Stuart's cavalry raid near Fairfax court house in Virginia.

He was at Wolf Run Shoals doing outer picket duty at Washington from March til June of 1863. Mr. Sheldon's regiment was attached to the first army corps on June 25 and began the march north which ended at Gettysburg.

Company K., of which Mr. Sheldon was second lieutenant, was the only company which reported all three officers on duty at the end of the march and ready to enter the battle of Gettysburg.

Mr. Sheldon was mustered out of service in 1863 and a little later joined the army and became attached to the commissary department. He was associated with Gen. Farrero's brigade and remained in this position until the end of the war.

On December 11, 1866, he married Eliza Harman, and last month they celebrated their golden wedding anniversary. Besides his wife, Mr. Sheldon leaves a daughter, Mrs. Erwin E. Keyes of this city, and a son, Lorenzo H. Sheldon, also of Rutland.

The funeral will be held at the house tomorrow afternoon at 2 o'clock. The burial will be in the family lot in Evergreen cemetery.