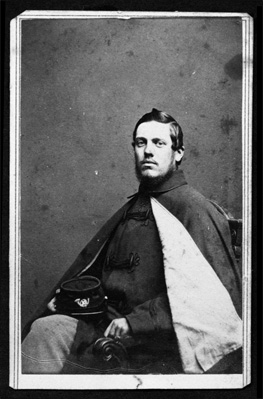 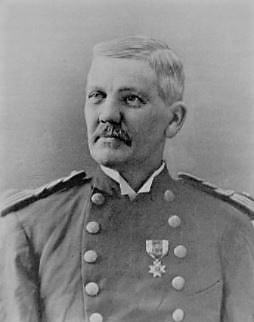 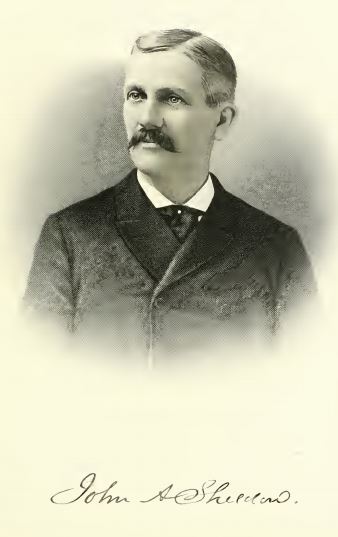 SHELDON, JOHN ALEXANDER, eldest son of Charles and Janet (Reid) Sheldon, was born in Troy, N. Y., August 14, 1839. His education was received principally at the Sand Lake Academy, Sand Lake, N. Y., and at Williamstown, Mass. Just before he reached fifteen years of age he left school and entered the store of Sheldons, Morgan & Slason. He filled a minor station here for several years, and then accepted the position of book-keeper for the same firm. He remained in this office until the breaking out of the War of the Rebellion. The call of the government for volunteers, which drew from their homes so many of the sons of Vermont, stirred his sense of patriotism and he joined the First Regiment of Vermont Volunteers (three months men) as sergeant. Returning home at the expiration of this term, he remained until the organization of the Tenth Regiment, in which he again went to the front as captain of Company C. The record of this gallant regiment has been preserved in a historical volume and will be found in brief in this work. Mr. Sheldon remained in the field through the remainder of the war, and on his return purchased an interest in the great marble business of his father, as described above. As a member of this firm his excellent business qualifications, his untiring industry and his general popularity have enabled him to exert an influence for its prosperity second only to that of his father. These qualifications have not gone unrecognized by his townsmen; he has filled the office of selectman three years; was trustee of Rutland village and one year president of the board. In 1876 he was elected to represent the town in the Legislature of the State; in this year he also acted as senior aid-de-camp on Governor Fairbank's staff. He was for several years a trustee of the old Rutland Savings Bank and is now vice-president of the Merchants' National Bank of Rutland. Immediately succeeding the war he took up his residence in Rutland village, where he purchased his beautiful home in the spring of 1870.

John A. Sheldon, postmaster at Rutland died at 1 o'clock Monday after a long illness of kidney trouble. A wife, four sons, and three daughters survive him.

John Alexander Sheldon was born in Troy, N.Y., August 14, 1833. His early education was obtained in private schools in New York city until he was nine years old, when he became a student of Sand Lake Academy, Sand Lake, N.Y., being graduated there at the age of 12 years. After six months preparation at at Williamstown Academy at Williamstown, Mass., he passed successfully the examination for entrance to Williams College but ill health and a weak constitution prevented the consummation of his long cherished purpose to enter college, therefore in 1854 he returned to Rutland (now West Rutland), and entered the store of Sheldons, Morgan & Slason as a clerk. After remaining on that position three years, he was promoted to the position of bookkeeper for said firm, continuing to act in that capacity until the outbreak of the Civil War. Being at that time a sergeant of the Rutland Light Guard, of which Gen. W. Y. W. Ripley was captain, he enlisted, as did nearly every member of the company, and it became Company K, 1st Vt. Inf. Sergeant Sheldon became second sergeant of the company. May 2, 1861, the regiment was mustered into the United States for three months and was ordered to Fortress Monroe, Va. In that vicinity and at Newport News, he served out the time of his enlistment, participating in the Battle of Big Bethel. Returning home, he resumed his position as bookkeeper, until August, 1862, when he again enlisted, recruited a company, becoming captain of Company C, 16th Vt. Vols., in which position he remained until June, 1864, when he received the appointment as assistant commissary of subsistence with the rank of captain, in which he served until the close of the war. He was on the staff of Gen. U. S. Grant for a portion of the time. After his return from the war he purchased an interest in the marble business, becoming a member of the firm of Sheldons & Slason, which soon changed its name to Sheldon & Sons, and still later to th Sheldon Marble Co. Mr. Sheldon acted as treasurer of the company and held this position for several years until the company was purchased by the Vermont Marble Co.

Mr. Sheldon was trustee of the village of Rutland in 1871 and 1872, selectman of the town of Rutland in 1873, 1874, and 1875, represented the town of Rutland in 1876 in the legislature, and was senior aide-de-camp on the staff of Gov. Horace Fairbanks, with the rank of colonel. Upon the incorporation of the city of Rutland, he served as alderman in 1892 and 1894, and later he was mayor of the city. He was appointed postmaster of the city of Rutland, April 20, 1909, which position he held at the time of his death. February 20, 1909, Mr. Sheldon was elected department commander of the Department of Vermont Grand Army of the Republic. He was a member of Center Lodge, No 24, of Masons, also of Davenport Chapter and Killington Lodge, knights Templar. He was a companion of the Loyal Legion of the State of Vermont, a comrade of Roberts Post No. 14, G.A.R., Department of Vermont, being a charter member of said post, and had served as adjutant and commander. He was a member of the Congregational church and had been a deacon for many years.