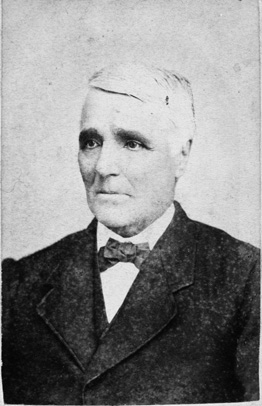 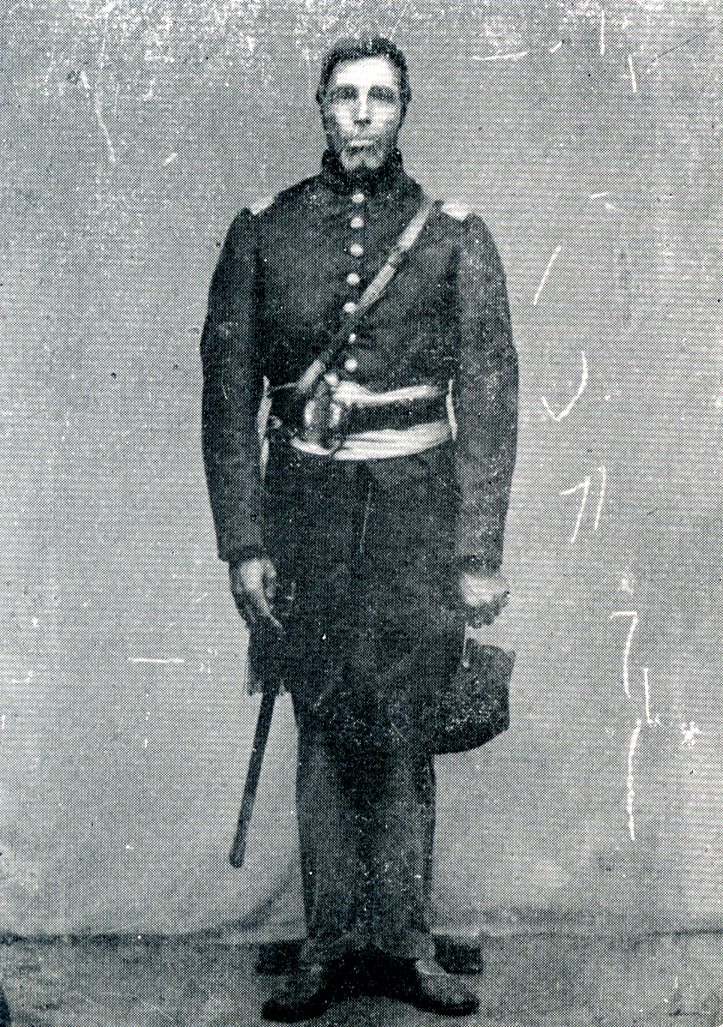 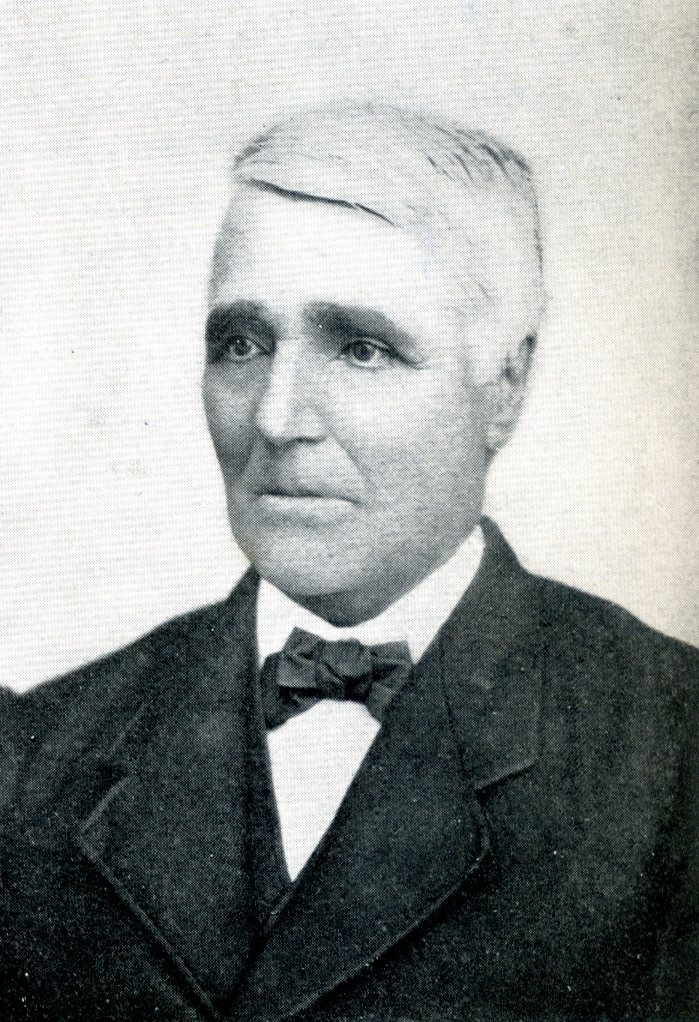 ARO PHINEAS SLAYTON son of Bucklin and Sally (Willis) Slayton was born at Calais, Vt., September 16th, 1818, enlisted in Company H, 13th Vt. Inf., August 19th, 1862; was elected 1st Lieut., mustered into service October 10th, promoted to Captain June 28th, 1863, and honorably discharged July 21st of same year. Of his war record, I will say but little, as it would be unbecoming for me, his son, to boast of his achievements, but from what has beeii told me I know that he was a brave soldier, an efficient officer and popular with his men. He was with his company and regiment in the long march to, and the three days' fight at Gettysburg, after which his company was with the Brigade in a forced march in pursuit of General Lee's retreating army over the mountains to Littletown, Maryland, where on the 9th of July was detached and started for Vermont to be mustered out. That he was not the first of his race to fight for his country is attested by the fact that his great grandfather, Phineas Slayton fought three years in the old French and Indian War, and was also an officer in the Revolution; his grandfather, Jesse Slayton enlisted in the Revolution at the age of 14, and his father Bucklin Slayton served in the war of 1812. His great grandfather, Nathaniel Bucklin and his maternal grandfather Edmund Willis, were also soldiers of the Revolution. Going back still further, we find that he was a descendant of the famous Captain James Parker of Groton and Watertown, Mass., whose house was a garrison during King Phillip's War, and for a long time, the only white man with whom King Phillip would confer. He was also a descendant of Comfort Willis of Bridgewater, Mass., who served in King Phillip's War and left a manuscript history of the same which is preserved in the Library of the Massachusetts Historical Society in Boston. There were other ancestors who fought in the several Colonial Wars, which for lack of space we will not mention. But while his ancestors could fight if necessary, they were of the peace loving kind as well. In the records of the Massachusetts "Society of Mayflower Descendants," Boston, he is recorded as a descendant of James Chilton Francis and Samuel Eaton Francis Cooke, and others of the Mayflower pilgrims including Dr. Samuel Fuller, the* Mayflower physician. When a young man he learned the carpenter's trade from his father, who is said to have been the first in the State to frame a building by what is known as the square rule. This trade was followed in Vermont and Massachusetts with the exception of a period during which he conducted a starch factory in Calais. In 1861 he bought a tract of wild land in the southeast corner of Elmore on which is now known as the Eagle Ledge road, and erected a sawmill, the wheels of which were started for the first time Thanksgiving Day, 1862, but his love of country was stronger than the desire for private gain, and turning over the business for a time to his brother Geo. J., he moved his family back to Calais, and enlisted leaving his wife, a braver and more Christian woman than whom never lived, with five small children to look after with one more to be born during his absence. In figure he was tall, square shouldered, of a decided military bearing, very much of an athlete, and a dead shot, always bringing the gun to his left shoulder and firing almost instantly without seeming to take any aim. He liked nothing better than a good story, and the writer well remembers as a boy sitting up until midnight to hear visiting comrades and himself tell of their experiences. He was an especial admirer of Colonel Randall, and I remember on several occasions of hearing him say that to Randall should be given much of the credit of breaking Pickett's charge at Gettysburg.

His account of it as I remember was that Colonel Randall first saw the opportunity and ordered the building of the rail fence, and that General Stannard exclaimed, "That's right. Colonel go ahead, go ahead," and immediately the ran fence breastwork was erected. There are one or two anecdotes relative to his service which I remember so well that I will endeavor to give them.

One evening while camping at some point the exact location of which 1 do not remember, he and one of his lieutenants had occasion to ride on horse back some) distance from camp not returning until toward morning, they discovered much to their chagrin that three members of their Company who had been detailed for picket duty were asleep at the foot of a tree with their guns leaning against the opposite side. After consulting a moment, they crept up to the tree and having secured the guns, retreated a short distance and gave a wild yell. Instantly the pickets sprang to their feet and for their guns which to their consternation were not to be found. After a few moments the officers made themselves Known and after administering a sharp reprimand, informed the men that while the penalty for the offence was death, on account of their previous good record and fatigue from over work they should say nothing about it unless the men themselves spoke of it, in which case all would be liable to court martial. To this one of the men replied, "Guess if you don't say anything about it, Captain, we sha'nt," and he never did. Years after when the war was over, the men told of it themselves.

I have heard him tell many times in a laughing way, of Stoughton's "Going to the front." One of his men tells me that the captain picked up a musket or rifle one day at Gettysburg, and used it quite freely, and that Colonel Randall noticing this exclaimed, "Company H has a new recruit." He had several narrow escapes at Gettysburg, his hat rim was shot oft close enough to his head to have the bullet singe his hair, and on another occasion while stooping over to pick up a knife, a shell which would have struck him in the chest had he been standing, knocked him down and exploded killing several men directly back of him. He considered that the knife saved his life and always kept it. He was married in Calais, July 22nd, 1846 to Lucy Blanchard, daughter of John and Catherine (Smith) White, and to them were born five sons and four daughters. Seven of his children are now living, viz: Frank L. a farmer in Elmore, Herbert A., a carpenter in Montpelier, Calvin A. an electrician in Morrisville, Mrs. Clara I. Barker and Mrs. Lucy M. Connors of Chippewa Falls, Wis., Orrin L. a farmer in Calais, and William T. the writer of this sketch, a physician in Morrisville. During his residence in Calais and Elmore, Captain Slayton was honored, or burdened, with nearly every town office within the gift of the inhabitants representing the latter town in the Legislature of 1868. On his return from the War he moved the family back to Elmore where he followed lumbering, farming and bridge building until 1885. During this period he is said to have built partly by contract over seventy-five railroad bridges on the Central Vermont, Montpelier & Wells River, Boston, Concord & Montreal, and N. V. & N. E. railroads. In 188.5 he sold his lumber business to two of his sons and moved back to his native town, Calais, residing there until 1893 when he moved to Hyde Park where he died December 11th, 1899, of valvular disease of the heart, resulting from rheumatism contracted in the service, and is buried in the village cemetery at that place. Honest and upright himself, generous and hospitable to a fault, he allowed others to impose upon him, and died a comparatively poor man.

His sword, a priceless heritage, with my membership certificate in the "Military Order of Lhe Loyal Legion" hangs near my desk at this writing and to look at It is to realize that I have done scant justice to this sketch and to wish I could do more to honor his memory as well as that of all others who "wore the blue," and were not found wanting in the time of need. (See page 316, picture.) • Yours very respectfully, WILLIAM T. SLAYTON. Morrisville, Vt., April 10th, 1905.

DEATH OF CAPT. A. P. SLAYTON

Capt. Aro P. Slayton, who has been in poor health a long time, died Tuesday morning at 11 0'clock, from organic heart and liver trouble, contracted in the army. Captain Slayton was born in Calais Sept. 16, 1818. He was a carpenter and bridge builder; he was called authority on bridge building, and built over 75 bridges on the Vermont Central, B. C. and M., Montpelier and Wells River, N. Y. and N.E. Milton Branch and other roads---one at Lawrence, Mass., 750 feet long. In 1862 he enlisted in Co. H., 13th Vt., was elected first lieut., was in skirmish with Stewart's Cavalry at Fairfax Court House, was promoted Captain; marched 175 miles in seven days with Reynolds to Gettysburg, fought three days in the Vermont Brigade, did guard duty on the battlefield until July 9, when sent to Brattleboro, where he was honorably discharged. After the war he located at Elmore where he engaged in lumbring; was elected to the legislature in1868. In 1846 he married Lucy B, White, with whom he had nine children, seven who are living, namely; Mrs. H. C. Barker and Mrs. C. B. Connors of Chippewa, Wis, H. A. of Montpelier, E. L. of Calais, Frank L. of Eloer, Calvin. and William T. of Hyde Park. Capt. Slayton came to this town in 1892. He was a worthy citizen, and a man of excellent character, and held in the highest regard by all. The funeral will take place Thursday afternoon, at 2 0'clock. The burial will be in the village cemetery.