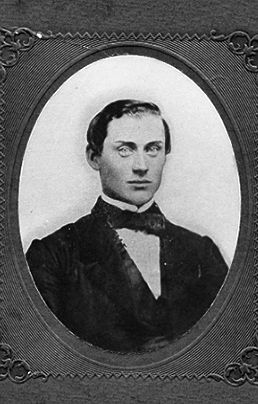 Mr. Sleeper’s early life was spent in farming until the outbreak of the Civil War, in which he served three full years. He enlisted June 9th, 1862, from Newport, and was mustered into the United States service the same day as corporal of Company E, 9th Regiment of Vermont Volunteers, of which company Amasa Bartlett was captain. He was promoted to Sergeant August 8th, 1862; First Sergeant, November 28th, 1864 and Second Lieutenant May 20th, 1865. His war service was of high character, he was respected and beloved by his comrades and trusted by his superior officers.

At the close of the war he returned to his native town and engaged in farming. October 7th, 1865 he was married to Mrs. Harriet Corse, and they lived on a farm a short distance from Newport Center until 1882, when they moved to the then village of Newport. Mrs. Sleeper passed away in 1922.

Mr. Sleeper held many important offices in the town of Newport, being highway surveyor for fifteen years and school director for a long time, and while living in the village of Newport and Newport city, he served as selectman, and was overseer of the poor and superintendent of the poor farm for eighteen years, during which time the live stock upon the farm increased from fourteen to sixty head, and the annual receipts from the farm increased from $275.00 to $ 3250.00.

Mr. Sleeper was faithful to every trust, and gave to all public duties the same efficient service which his personal affairs received from him. The service which he gave to the State and Society as probation officer for Orleans county will probably be remembered longer and by more people than any other. Appointed March 1, 1900, he held the office and performed the difficult duties required until his health required him to give up the work a few weeks ago. During the twenty-six years which he held this office, he kept in close touch with all the probationers in the county of Orleans; visited them frequently; advised and instructed them with relation to their conduct and manner of living, and was so thoroughly interested in his work, and performed it with such wisdom and efficiency, as to be of the greatest benefit to the individuals committed to his care and to society generally.

Mr. Sleeper was a member of Memphramagog Lodge, Cleveland Chapter, Malta Commandery, and was an active member of Baxter Post, G. A. R., of which he was Commander at the time of his death, which office he held for ten years previous. The Post ceases to exist at his passing; the charter is to be returned to headquarters, and the balance in the treasury, $150.00, is to be donated to the Orleans County Memorial Hospital.

In 1916, the writer appointed M. Sleeper, with George F. Root and C. F. Bigelow, a committee, to report to the village of Newport a plan for the improvement of Main street. Mr. Sleeper was then 80 years old, but he visited several cities in Southern New England with t he other members of the committee; made examinations in many cities and took an active part in recommending and reporting a plan to the voters, which was almost unanimously adopted, and as a result the city of Newport now has one of finest streets in the state.

The writer of this sketch first knew Mr. Sleeper in the 70’s, when he was living on a farm near Newport Center, and then had an opportunity to learn the real character of the man, and was greatly impressed by the highminded and very honorable manner in which he met a very difficult problem, which he worked out successfully. He could have evaded personal responsibility easily; saved himself many years of hard labor with very little criticism from the public, but his personal sense of honor would not allow him to shirk what he considered his duty. Our acquaintance ripened into a warm friendship which continued during his life, and his life since our first acquaintance has been the natural result of carrying the ideals which he then had, into the service which has given during his long and useful life.