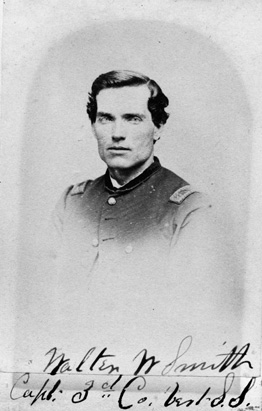 Captain Walter Wallace Smith, one of the veterans of '61, and a member of Social lodge, F&AM of Wilmington, Vt., died at his home in Fitchburg on the evening of Memorial day. He had suffered from chronic disease contracted in the service which gradually undermined his constitution and probably prepared the way for his sudden demise. Captain Smith was born at Wardsboro, Vt., October 11, 1837, and his parents were Lewis and Lucinda Smith. He left home when quite young and traveled in the west, visiting two uncles and other relatives. He returned to Vermont just before the breaking out of the civil war and enlisted in Company H, second regiment of Colonel Berdan's United States sharpshooters.