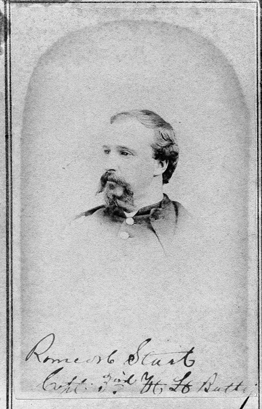 Word came to this city yesterday of the death of Capt. Romeo H. Start, which took place at his home in Eau Claire, Wis., last week. Capt. Start was a young lawyer in the town of Franklin, Vt., when the war broke out. He enlisted in the 3d Vermont regiment when it was organized and was appointed second lieutenant of Co. H, June 3, 1861, he being then 24 years old. He went to the field with the regiment in July 1861, was promoted first lieutenant in November 1861, and to the captaincy of Co. E, September 22, 1863. He resigned and returned to Vermont in the early summer of 1863, to recruit a light battery, which the State authorities had decided to raise. He recruited the men for this, and was commissioned as captain of the 3d battery, Vermont light artillery, November 3, 1863. The battery was mustered into the United States service at Burlington, January 1, 1864, and soon after left for the field. It was assigned to the 9th army corps, joined the Army of the Potomac, with the corps, in the wilderness campaign, and was engaged in front of Petersburg, doing constant and often arduous duty, until the fall of Richmond and the surrender of Lee. Capt. Start was an efficient officer and made an excellent record as a soldier of the Union. After the close of the war, Capt. Start established himself in this city in the practice of his profession. He was elected State's attorney of this county in 1869. About a year after he resigned the office to accept a position as deputy collector of customs under Collector Stannard. From 1873 to 1875 he was city attorney of Burlington.

Twelve years ago he removed to Wisconsin. He practiced law for a number of years in Baldwin, in that state, removing thence to Eau Claire, and was well known in his profession throughout the State.

Capt. Start married an estimable woman in Eau Claire, who survives him, as do two children, a son and daughter, by a former marriage. The son, Phillip S., resided in Eau Claire and was with his father during his last illness. A daughter, Miss Jennie H., lives with her mother, Mrs. F. H. Start in this city. The Eau Claire newspaper, in its last issue, mentioned the critical illness of Capt. Start, saying, "His heart is seriously affected and this, with other complications, makes his physician and family fear for the worst. Capt. Start is recognized as one of the ablest lawyers in this city, and a sterling Christian gentleman."