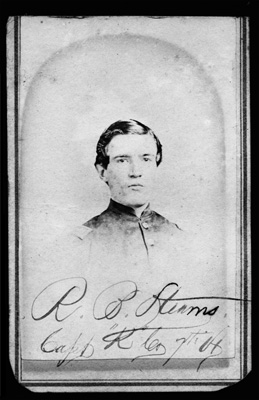 His son, Captain Riley Burdett Stearns, was born in Rockingham, Vermont, August 29. 1S40. He received a common school education, and in 1858 came to Burlington and engaged as clerk in the drug business until the breaking out of the Civil war. He enlisted, May 9, 1861, in Company H, First Regiment Infantry, and served in the ranks during the entire term of that regiment until August 15, 1861. After a respite of a little more than three months, he re-enlisted, November 30, 1861, in Company A, Seventh Regiment, Vermont Infantry, and was made first sergeant. October 15, 1862, he was promoted to be first lieutenant of his company. In July of the next year he received the appointment of acting adjutant, and, May 16, 1864, assumed, in addition, the duties of regimental quartermaster. For a time he acted as assistant adjutant general of the First Brigade of troops in west Florida, and, September 22, 1864, was advanced to the captaincy of Company K of his regiment.

He was present at the first siege of Vicksburg, in June and July of 1862; at the spirited charge at Gonzales station, Florida, July 22, 1864, where the Seventh Vermont received much praise for its steadiness and daring; and at the siege of Mobile and the Spanish Fort, Alabama, in March, 1865. While in command of a portion of the skirmish line in front of the fort, and under cover of a dense smoke from a fire started by the enemy, which entirely concealed his movements from the Union generals, he was surprised by a sortie from the fort and made a prisoner with twenty of his company. For his courage and obstinate resistance on this occasion he was commended by his colonel and brigade commander, and also by the Confederate general in command of the fort. After a brief captivity he was paroled at Vicksburg on the 22d of April, and honorably discharged by special orders of the war department, May 15, 1865. He was a good soldier and capable officer.

After being mustered out of the service he resumed his position as clerk in the drug business. In 1870 he formed a partnership with Albert C. Tuttle, under the firm name of R. B. Stearns & Company. He was associated in business with Mr. Tuttle for about twenty-five years, when Mr. Tuttle withdrew from the firm. A few years previous to his withdrawal, W. J. Henderson was admitted to the firm, and in 1899 Mr. Stearns sold out his interest to Mr. Henderson, reserving the right of the firm name, and bought out Beaupre & Lowrey, being in business for himself from that time until his death, August 9, 1902. Mr. Stearns was president of the Burlington Retail Druggists' Association, and was a member of the Military Order of the Loyal Legion, and the Reunion Society of Vermont Officers. He married, September 13, 1864, Jane Augusta Swan, daughter of Jonah and Caroline (Story) Swan; she is still living in Burlington.