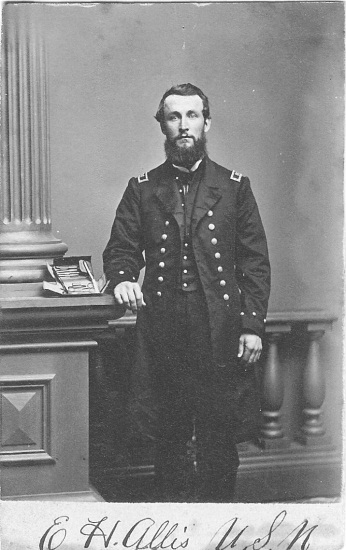 Egbert Henry Allis, born in Brookfield, April 15, 1836, was appointed Acting Assistant Surgeon, U.S. Navy, on January 27, 1862. He was initially assigned to the side-wheel gunboat USS Westfield, a former ferryboat purchased by the Navy from Cornelius Vanderbilt at the beginning of the war. Westfield saw action on the Mississippi River with Commodore David Porter's Mortar Fleet, where Allis was commended by his commanding officer for "kind and unremitting attention to the sick." Westfield was later engaged in the blockade of Texas, leading a successful assault on the city of Galveston, which it captured on October 9, 1862. When the Confederates recaptured the city in January, 1863; Westfield ran aground and the crew set charges to destroy the boat rather than let it be taken. Unfortunately, the charges went off early, killing the captain and most of the senior officers; with the paymaster absent, Allis was left to report on efforts to save official records.That spring, Allis went home on leave, and in August, reported to USS Bainbridge, then at New York. He took with him S. Horace Smith, son of his sister Mary, aged 17, who joined the service 13 August 1863, as a Surgeon's Steward. Bainbridge left New York on August 18, bound for the South Atlantic Blockading Squadron; the vessel encountered a hurricane and sank off Cape Hatteras on August 21. Allis, Smith and 98 others in the crew perished. The only survivor was picked up by the brig South Boston the next day.