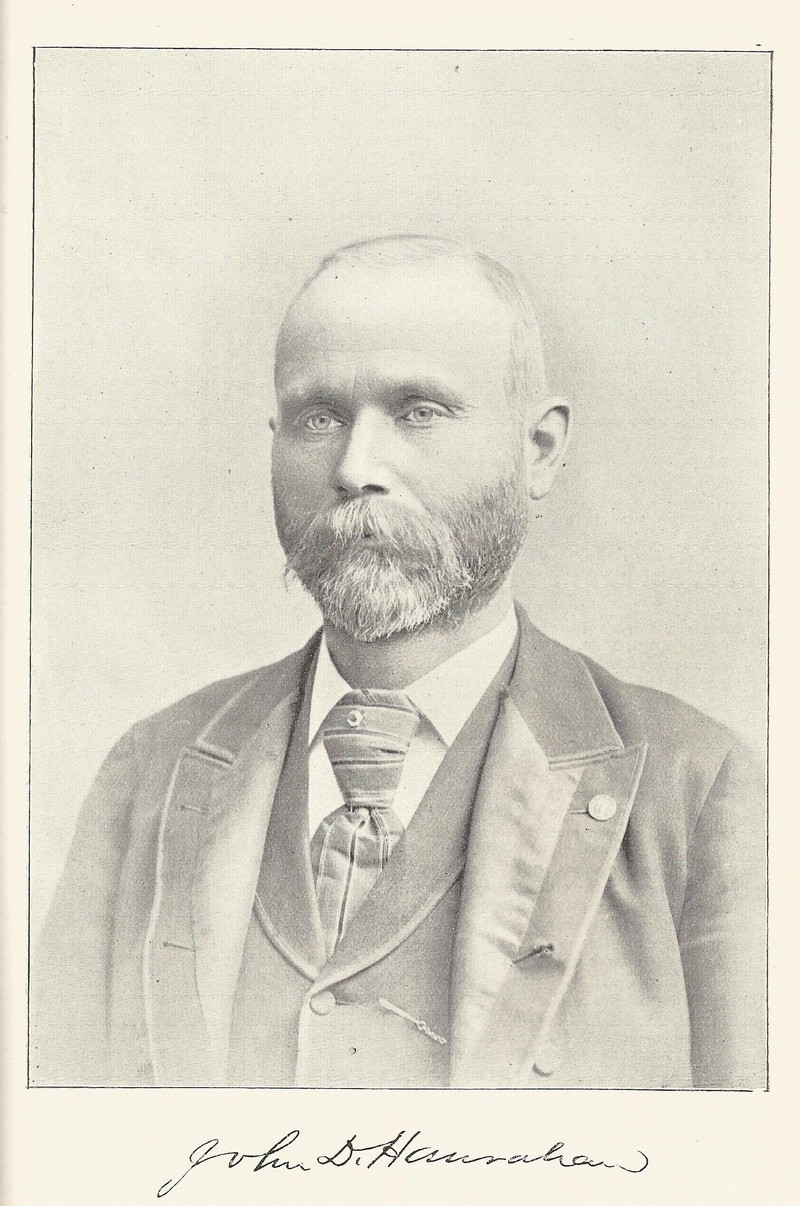 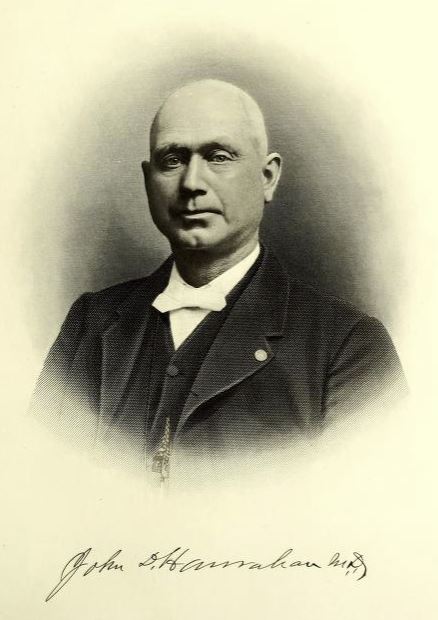 Hanrahan, John David, of Rutland, son of James and Ellen (O'Connor) Hanrahan, was born in Rathkeale, county Limerick, Ireland, Jan. 18, 1844.
He attended the National schools in the place of his nativity till his father removed with his family to New York City. Here he became a pupil of the free academy, then entered the New York Medical University, where he remained till 1861, when at the breaking out of the rebellion he entered the U. S. Navy as surgeon. During 1861-'62-'63 he served in the Potomac flotilla, and on the 23d of August, 1863, the vessel on which he was serving was captured and all on board made prisoners. After being in Richmond six weeks he was paroled and transferred to Washington. While a paroled prisoner in Washington he attended a course of medical lectures at the medical department of the Georgetown University. In the early spring of 1864 was exchanged and ordered to duty in the North Atlantic squadron, where he served under Admirals Lee and Porter until discharged in July, 1865. Two years subsequently he received his diploma from the medical department of the New York University, practiced in New York until the spring of 1869, when he removed to Rutland, where he has since resided and built up an extensive general practice.
Dr. Hanrahan has been connected with various medical societies, in which he has taken an active interest and held many positions of trust and responsibility. Outside of his professional duties, he has been largely influential in both town and state affairs, has been trustee of the village of Rutland, as well as the president of the board, was appointed president of the Rutland county pension board in 1885, the duties of which he so acceptably discharged that, notwithstanding his loyal adherence to the Democratic party, President Harrison continued him in office until his resignation to accept the position of postmaster of the city of Rutland, which appointment he received from President Cleveland in 1893. A strong Irish Nationalist in his views, Dr. Hanrahan has been a potential factor in the Rutland Land League and a delegate to all the national conventions. He has served as chairman of the Rutland county Democratic committee and has frequently been a member of the state committee; has been a delegate to the Democratic national conventions of 1884 and '88 and chairman of the delegation of 1892. Has always been a warm supporter of President Cleveland. Dr. Hanrahan is also prominent in G.A.R. circles. He is a member of the local post and has served on the staff of Commanders-in-chief Veazey, Palmer and Weissert, and has been medical director of the Department of Vermont.
In his religious creed he is a Roman Catholic, worshiping with the congregation of St. Peter's in Rutland.
Dr. Hanrahan was united in marriage Feb. 12, 1870, to Mary, daughter of Bernard and Elizabeth (Halpin) Riley of Wallingford, who died April, 1882. October 31, 1883, he was again married to Frances, daughter of John C. and Mary (Hughes) Keenan of Rutland. Five children have resulted from their union: May, Anna. Hugh, Frances, and John.

Rutland Daily Herald, Dec. 27, 1923:
DR.JOHN D. HANRAHAN DIES AS RESULT OF FALL CHRISTMAS DAY
Aged Practitioner Was in Front Rank of State and City Medical Men
CIVIL WAR VETERAN
Dr. John D. Hanrahan, 79, prominent in city and state medical and political circles for nearly half a century, died at his home on Cottage Street shortly after 1 o'clock yesterday afternoon as a result of a cerebral hemorrhage.
Fell Tuesday Morning
Dr. Hanrahan was rendered unconscious early Tuesday morning when he on the pavement in front of his home while he was returning from midnight mass at Holy Innocents' church. He was taken into the house by his wife, who was with him, and Lewis Martin, a passerby. His son, Dr. Hugh H. Hanrahan, was summoned and his examination revealed a slight scalp wound on the side of his father's head.
Dr. Hanrahan was able to be about the house Christmas afternoon and shortly after 9 o'clock yesterday morning he went to his office on Center street. It is believed that he fell from the top of the office stairs. He was picked up by Dennis Canty and Patrick Lloyd and taken home in an automobile.
Thought He Would Rally.
Drs. Clarence Fagan, Hugh Hanrahan and S.W. Hammond were called and attended to the aged physician's injuries which consisted of several slight scalp wounds and abrasions. He was not rendered unconscious. It was believed he would rally from the shock, but shortly before 1 o'clock his condition grew worse and before a physician could be summoned he died.
Dr. Hanrahan was born June 18, 1844, in Rothkeale, County Limerick, Ireland, son of James and Ellen (O'Connor) Hanrahan. He attended the national schools at Rothkeale until he was (illegible due to line on microfilm) years of age when he came to this country and attended the public schools and free academy at New York. In 1860 he began his medical preparatory studies then took four courses of lectures at the medical department of the University of New York, graduating in March 1867.
Was Naval Surgeon.
In June 1861, Dr. Hanrahan was appointed a surgeon in the United States navy, the vessels to which he was assigned doing duty on the rivers of Virginia and North Carolina so that the doctor served with the army as well as his own branch of the service.
In August 1863, his ship was captured and Dr. Hanrahan became a confederate prisoner and was confined to Libby prison.
At the close of the war and the completion of his studies Dr. Hanrahan settled in New York where he remained for about a year. He spent another year in Montreal and then came to this city where he had since practiced as a physician and surgeon.
Had Been City Doctor.
He had been a director and consulting surgeon at the Rutland hospital and consulting surgeon at the Fanny Allen hospital in Winooski. For many years he was town and city physician of this city, was an examiner in several accident and life insurance companies and author of a number of medical papers.
Throughout his career Dr. Hanrahan had been a staunch Irish Nationalist and was at one time president of the Land league. He took an active part in local, state and national politics serving many years on the democratic state committee and as chairman of the democratic county committee. He was a delegate to the democratic national conventions of 1884, 1888 and chairman of the Vermont delegation to the national convention in 1892.
Headed Pension Board.
For four years, under President Cleveland, Dr. Hanrahan served as president of the United States Pension Examining board. He was treasurer of the same board for four years under President Harrison. He was postmaster of Rutland under the Cleveland administration, president of Rutland village two years, trustee eight years and county commissioner one year.
The doctor was a member of the American Medical association, the Vermont State Medical society, the Rutland Medical (illegible due to line on microfilm), the Rutland County Medical and Surgical society of which he was the (illegible due to line on microfilm) president, the Vermont Sanitary association, the Vermont Society for the Preservation of Tuberculosis, Roberts post, Grand Army of the Republic, the American Catholic Historical society and the American-Irish Historical society of which he was vice president for Vermont.
He belonged to the Rutland lodge of Elks, St. Peter's Hibernian Benevolent union, American Order of Foresters, Rutland council, Knights of Columbus, Ancient Order of Hibernians, Young Men's Catholic union, Queen of Vermont circle, Companion Foresters of America and the Reunion Society of Vermont Officers.
Was Thrice Married.
Dr. Hanrahan was married three times, to Mary A. Riley of Clarendon, who was the daughter of Bernard and Elizabeth (illegible due to line on microfilm) Riley; to Frances M. Keenan, a daughter of Dr. John C. And Mary Hughes Keenan and to Mary E. Griffin, a daughter of Michael and Mary Connoughton Griffin, who survives him.
He is survived by two daughters, Mrs. Walter Barber and Mrs. Nelson Dwyer, both of Brooklyn, N.Y.; two sons, Dr. Hugh Hanrahan of this city and John Hanrahan of Brooklyn, N.Y.; a sister, Mrs. Margaret Baxter of Patterson, N.J.; four grandchildren, Jack and Marjorie Barber of Brooklyn, N.Y., and John and Mary Frances Hanrahan of this city.
The funeral arrangements will not be announced until today due to the inability of Dr. Hanrahan's children to return to Rutland last night.

Rutland Daily Herald, Dec. 31, 1923:
BURY DR. HANRAHAN IN CALVARY CEMETERY
Grand Army Men and Physicians Are Honorary Bearers for ex-Soldier
The funeral of Dr. John D. Hanrahan, prominent Vermont physician whose death occurred Wednesday afternoon at his home on Cottage Street as the result of a cerebral hemorrhage, was held Saturday morning at 9 o'clock at Holy Innocent's church. Rev. A.C. Griffin, a stepson of Dr. Hanrahan, acted as celebrant at the solemn requiem high mass which was sung. Rev. William Cassidy of Proctor served as master of ceremonies and Rev. Bernard Kelley and Rev. J.M. Brown were deacon and sub-deacon respectively.
Among the organizations which accompanied the body from the home of Dr. Hugh H. Hanrahan to the church were Roberts post, G.A.R., Catholic Order of Foresters, Rutland lodge of Elks, St. Peter's Benevolent society, Rutland Council Knights of Columbus, Rutland physicians and members of the local lodge of Ancient Hibernians.
The clergymen who attended the funeral included Rev. J.J. Cullion of West Rutland, Rev. T.J. Burke of North Bennington, Rev. V. Michulka of West Rutland, Rev. Eugene Cray of Brandon and Rev. James Thompson of Burlington.
The honorary bearers were C.H. Granger, R.E. Bentley and George W. Kenney of Roberts post, G.A.R. and Drs. S.W. Hammond, George Rustedt and A.H. Bellerose of the Rutland physicians.
The active bearers were P.A. Caten of St. Peter's Benevolent society, Dr. Clarence A. Ball of the Rutland Medical association, Dr. D.J. Carroll of the Rutland lodge of Elks, J.P. Reedy of Rutland council, Knights of Columbus, C.J. Cocklin of the Catholic Order of Foresters and Seymour Billings.
Those from out of town who attended the services included Mr. And Mrs. W. Barber, Mr. And Mrs. Leo Coughlin and John Hanrahan, of Brooklyn, Mr. And Mrs. Frank Baxter of Bayonne, N.J., Mr. And Mrs. Phillip Griffin of White River Junction, George Lynch, Miss Margaret Lynch, Mrs. George Shapiro and Mrs. Margaret Garrity of New York.
A special program of music was sung by the choir during the church services. Numerous floral tributes were received from friends, neighbors and the many organizations of which Dr. Hanrahan was a member. Burial was in Calvary cemetery, where the committal service was read by Rev. A.C. Griffin and Rev. Bernard Kelley.
Obituary and funeral notice provided by Jennifer Snoots.