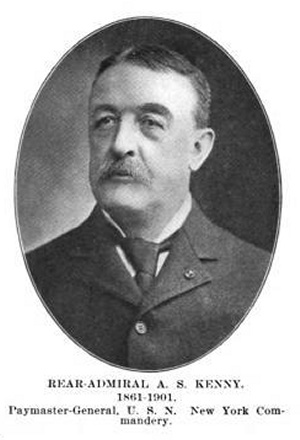 Albert Sewall Kenny was born January 19, 1841, in Van Buren County, Iowa, the son of Sewall and Mary (Strong) Kenny, both born in Vermont. He graduated from the University of Vermont in 1861, and was credited to Burlington, Vt., when he joined the service.

He was appointed Assistant Paymaster (Master) on March 19, 1862, and was initially attached to the steamer South Carolina in the South Atlantic Blockading Squadron, serving from 1862 to 1864, during the siege of Charleston. During 1864 and 1865, he served on the steamer Santiago de Cuba, in the North Atlantic Blockading Squadron, seeing action in both attacks on Fort Fisher.

In March 1881, Kenny served on a board of senior officers intrusted to suggesting a plan for carrying out an act of Congress that financed a search for the steamer Jeannette, "of the Arctic exploring expedition" which was lost during a polar expedition via the Bering Strait the previous winter.

From 1887 to 1890, he served in Washington at the Navy Department, in the Bureau of Provisions and Clothing. From October 1890, to June 1893, he was General Storekeeper at New York Navy Yard.

How long he stayed at the New York Navy Yard, and what else he did until his retirement, are currently not known.

His retirement date was set as January 19, 1903, and he was relieved of his duties on July 1, that year.

From May 1904 to May 1905, Kenny served as the treasurer of the Isthmian Canal Commission. He was a member of the D.C. Commandery of MOLLUS.