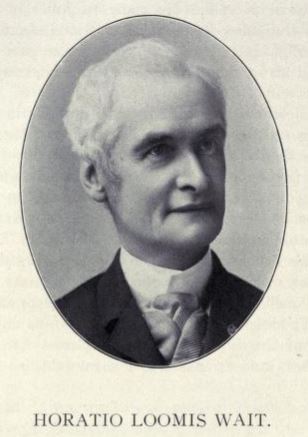 Horatio Loomis Wait was born in New York, on August 8, 1836, the son of Joseph and Harriet Heileman (Whitney) Wait. Horatio's father, grandfather and great-grandfather were residents of Vermont, and the latter a Revolutionary War veteran. Horatio was educated at Trinity School and Columbia Grammar School in New York City. In 1856 he went to Chicago with his mother after his father died. On May 7, 1860, he married Clara Conant Long, daughter of James and Cerusa (Conant) Long, of Chicago.

He was appointed Assistant Paymaster on July 14, 1862. In August 1862, he was assigned to the gunboat Pembina, South Atlantic Blockading Squadron, and cruised in the West Indies in search of the Confederate raider Alabama. Transferred to the West Gulf Blockading Squadron, Pembina captured the blockade -runners Joe Flanner and Elisha Beckwith, and aided in the pursuit of the Confederate raider Oreto (AKA Florida).

In August 1863, Waite was assigned to special duty on the steamer Mary Sanford, off Charleston. In November, he transferred to the South Atlantic Blockading Squadron flag-ship Philadelphia, participation in the occupation of Charleston and was involved in the re-hoisting of the old flag on Fort Sumter, by General Robert Anderson.

In August 1865, Wait transferred to the ship Ino, in the European Squadron. On April 1, 1866, he was promoted to Paymaster. He transferred to New Hampshire in March 1867, then served as Inspector at the Pensacola Navy Yard.

In 1870, he was ordered to the ironclad Dictator, in the West India Squadron, and resigned on July 22.

He was admitted to the bar in Chicago in 1870, and by 1876 was Master in Chancery, Circuit Court of Cook County, Illinois. He was a member of the Illinois Commander of MOLLUS, Naval Order of the U.S., Colonial Wars, Sons of American Revolution, Farragut Naval Veteran Association. He joined the Chicago Literary Club in 1877, was a frequent presenter and officer, and remained a member until his death in 1916.