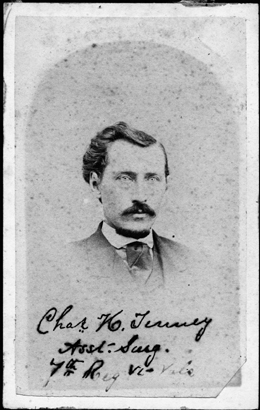 In the death of Dr. Charles H. Tenney, of the Vermont Asylum for the Insane, at Brattleboro, the Vermont Medical Society has occasion to mourn the loss of a valued member. To many of the fellows of the Society he may perhaps have been longer known than to the writer, whose personal acquaintance and association with him covered but the last 15 months of his life; but these were sufficient to attest fully his excellent professional skill and exalted personal character. The record of his life may be briefly summed up in the following data, for the most part from memoranda made by his own hand, as follows:

"Charles H. Tenney, son of Harper Tenney, was born in Hartford, Vt., February 21, 1830. Took the degree of M. D. at Dartmouth College in 1858, and also at New-York Medical College in 1859. Was about two years assistant Physician and Surgeon in the Island Hospital, and other Institutions on Black-well's Island, in New-York City. Married and settled in Hardwick, Vt., in 1860. Was appointed assistant Surgeon of the 7th Regiment of Vt. Volunteers in May 1803. Resigned his commission on account of disease contracted in the service in January 1864." In June 1864, he commenced practice in Hartford, his native town, where his wife died in November of the same year. In June 1871, he was appointed 2d Assistant Physician to the Asylum for the Insane at Brattleboro, and in August 1872, was advanced to the 1st Aseistancy, which position he held to the time of his decease.

His preliminary education was obtained chiefly at the schools of Thetford and Newbury, and he entered upon the study of medicine with Dr. E. V. Watkins of the latter place.

In my enquiries I have failed to ascertain any specially notable incidents in his life, but as one has expressed it, the whole. "was so made up of kind and worthy acts, that no one prominent deed outshone all others." His was the^exemplification of a thoroughly useful, consistent, christian life. Governed in everything by high and uncompromising principle, yet painfully sensitive to the opinions of others, no man was more truly benevolent and hnmane in his feelings, and no one more charitably disposed.in his judgments of others than he. Firmness was a prominent trait, and conscientiousness the ruling principle of action. He was the last man to be approached or influenced by sinister proposals in any way, and in all his fraternal relations, scrupulous and mindful of his oblign tions. To the institution with which he was last connected as a medical officer, he brought superior qualifications. To his professional acquirements were added mature judgment, and social qualities of a high order. In music he delighted, and many an hour was passed in this indulgence with those under his professional charge, and many in this way undoubtedly were drawn into nearer relations with him, and realized more fully that he was in sympathy with them, than otherwise they might have sup! posed. He saw clearly the great power of moral agencies in the treatment of the disordered mind, and exerted himself to aid in every possible way in the diversions of the inmates, even at the cost of personal convenience and comfort. Especially was this manifest during the past winter, when, notwithstanding his growing indisposition, he relinquished no effort, but more than ever before studied the wants of those under his care, and ministered to them with ever increasing assiduity and conscientiousness.

He left no published writings, professional or otherwise, but was known by his fellows as a thoroughly sound practitioner, and his memory will bo gratefully remembered by the many who were so fortunate as to have enjoyed his professional ministrations. In his decease the Institution has sustained a loss which will not soon cease to be felt, and a capable and devoted humanitarian has passed from the sphere of his labors to his reward.

His death was sudden and unlooked for. Ho was seized with Apoplexy on the afternoon of the 23d of April, and died on the morning of the 27th.