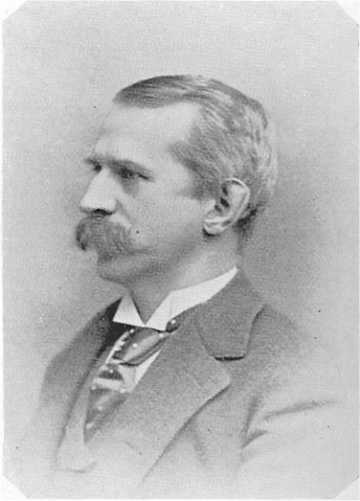 After attending the public schools he passed his early life about his father's mills, and one year in the army. In 1864 he secured a junior clerkship with the Western Union Telegraph Co., at Rochester, N. Y., and in 1866 was appointed storekeeper in charge of main supply depots of the company at New York. Continued advance in his salary made this an agreeable position, which he retained until he resigned in 1879, to become junior member of the firm of James E. Vail, Jr., & Co., dry goods commission merchants and manufacturers' agents, Worth street, New York. Six years later he purchased Mr. Vail's interest and became senior member of the present firm of Watson, Bull & Co., who have largely extended the business dealings with leading wholesale houses throughout the country. He is also president of the Connecticut Witch Hazel Co., whose production will equal three thousand barrels yearly.

In August, 1862, he enlisted as private in Co. F, 16th Regt. Vt. Vols. Upon the promotion of one of his comrades he became the clerk of the regiment, and was thereby relieved of all equipment and company duty. At Gettysburg he selected one of the many abandoned muskets on the field, and with a handful of cartridges sought out his company at the front, where he remained throughout the battle. His conspicuous bravery was known to all the officers of the regiment, and Colonel Veazey, recognizing that this youth was the only detailed man who voluntarily exposed himself on this sanguinary field, appointed him quartermaster-sergeant of the regiment, the highest honor at his command.

Mr. Watson enjoys the genial, social side of life, and in this way has had many duties to perform connected with various associations.

He was the first treasurer of the well known Apollo Glee Club, of Brooklyn, N. Y.; secretary of the Oxford Club of Brooklyn, 1883 to '85, and of the Telegraphers Mutual Benefit Association, 1876 to '79; a director of Stamford Social Club, 1889 to 1892, and is now its president (1893). He is vice-president of the Forest and Stream Club, of Wilmington, and also a director of the Stamford Yacht Club; he is also president of the Clover Club in New York City.

He was singularly fortunate in his marriage, Oct. 28, 1879, to Julia Brainerd Vail, a very attractive and noble woman, daughter of James Everett and Ridelia Kenyon Vail, of Brooklyn, N. Y., where they resided till 1886, removing thence to Stamford, Conn. Their home, "Oakdale," on the banks of Rippawanna river, while unpretentious, is noted for the cordial, hearty welcome and kindly good cheer extended to all.