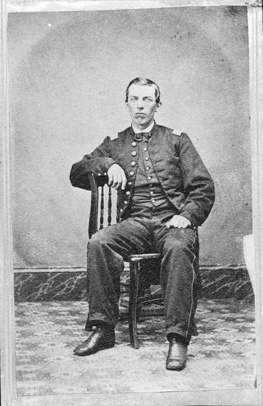 A LETTER FROM LIEUT. WEBB, OF THE NORTHFIELD COMPANY

DEAR FATHER: --- Night before last, at 7 p.m., I was thinking that perhaps my last letter to you would be my last. At 7 our Company, with four others from the Vermont Regiment, had orders to be ready to march at 12 that night, with forty rounds of cartridges. We started from this camp with 600 German, 250 Vermont, and 250 Massachusetts troops. Under orders we marched nine miles without stopping. We were to meet two Regiments from Fortress Monroe, at a point eight miles from our camp. But when we arrived they were not there; so we marched on and went about two miles beyond. We heard heavy firing of artillery and musketry, and supposed that our artillery and rear guard of 600 Germans had been attacked by the rebels. We then countermarched back two miles on the run, formed the line of battle and charged on them. But we soon found that they were part of our own forces that had come from the Fortress to act in concert with us, who the Germans thought were Secessionists, and pitched into them accordingly --- killing three, and wounding three or four of Colonel Townsend's Regiment. The firing made us four miles of extra marching, besides giving the enemy warning of our coming. We then marched some four or five miles, when we were overtaken by Col. Townsend and Col. Duryee's Regiments, making in all about twenty-five hundred men. If we had gone directly to the place we started for, we should have done very much better. We were under the command of Brigadier General Pierce. We marched up to within seven-hundred yards of the enemy's entrenchments and formed three lines. Col. Duryee's Zouaves made charge, followed by Col. Townsend's Regiment, while we were posted for a short time, as a researve in rear of the whole. The rebels were sending their shells in among us at the rate of one per minute --- bursting in all directions; but none of us were hit, until the order came to charge.

I will describe the place before I go any farther. Bethel Meeting House is the name of the place. It is twelve miles from this camp, and eight miles from Yorktown (where the rebels have a very large force), and four miles from Hampton. The firing between our two regiments (Townsend's and the Germans) enabled them to signal across the river to send over to Yorktown for reinforcements; when if we had gone straight ahead we should have surprised and taken the whole of them, for as I before said, we were posted in the rear for a while. Afterwards we had orders to form on the right flank of the Zouaves, where the balls whistle some, I can tell you. Afterwards we were ordered farther to the right where there was no firing, nor did the rebels expect any. The result was that they (the rebels) received some five hundred balls among them, and the majority of them told, too. We kept up fire for about half an hour, when the call for retreat was sounded, and we were obliged to heed it. We retired from the field for the want of more men and artillery. We had only two cannon and two small howitzers, while the enemy must have had a battery of ten to fifteen guns besides a rifled cannon which did fearful execution among our troops, and about three thousand men, as near as we could judge. So you will see by the above that five companies of the First Vermont Regiment have been under fire, and did not flinch a particle. At least the Northfield did not, I know, for I was with them all the time. The Woodstock, Bradford, Northfield, Burlington and Rutland were the companies detailed for the Bethel expedition. The Rutland and Burlington were detailed as skirmishers, and did not have a chance to fire a shot, but the shot whistled over their heads pretty freely. One of our men, Robert Coffey, by name, fainted away before we went into action. He had not been very well all day; and having to march twelve miles, and run three, it tuckered some of them out. We left Coffey in care of the surgeon, and started for the scene of action; got almost there, when we had to leave the Captain--- not because he was afraid, by any means, but running and marching so far was to much for a man of his flesh. We started again, and another man (Larabee) gave-out with sun stroke. We left Second Lieutenant Gove to get him to the rear, and I took the rest of our men on.

I never saw hail stones any thicker than the balls were about our heads. We did not have a man hit, but some I should judge had a rather narrow escape, by the holes in their coolers. We have one man missing; he was last seen about five miles this side of the battlefield. He must have got mixed up with the troops that went to the fort. The Woodstock and Burlington companies have each one man missing in the same way. Two of the Bradford and two of the Woodstock men were wounded --- not any of them very badly. The men are all tired and footsore after their thirty-five miles march of yesterday. There are but very few of them but are around without any boots, and with very tender feet. They do not feel very well satisfied with the fight of yesterday; they are anxious to try it again. I tell you that you had better believe it is a tough place, facing an enemy when the balls are flying so thick as hail stones. After the first volley we did not think of the balls coming to us, but how we could best send balls to them. I think by tomorrow there will be another force sent out to rout them. Our troops were fired on from a house and the ball just grazed the leg of Orderly Sweet of the Woodstock Company. The smoke from the gun had not any more than cleared away before he was a prisoner, and his house (a very beautiful one, by the way) was in flames. The man proved to be Lieut. Whiting, Adjutant of a rebel regiment. We took five other prisoners, about forty bridles, thirty knives, and a host of other things. I am so tired I cannot write much more. There were wounded and killed about forty on our side; we must have killed seventy-five or one-hundred of their men. The entrenchment was completely surrounded by trees and bushes, except on the side where we were firing. The man we cannot find is John Buxton. We were repulsed for the want of men and artillery; 3000 men not covered against 3000 entrenched, with fifteen pieces of cannon, is most to much. 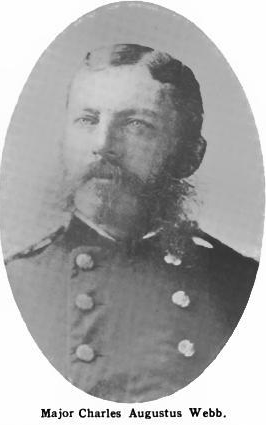 Charles A. Webb, son of Edward Augustus and Mary Ann (Wainwright) Webb, was born in Montpelier, Vt., December 29, 1838, and died of pneumonia at Fort McKavett, Texas, January 31, 1882; was buried in San Antonio, Texas. In 1848, his parents removed to Northfield, where he attended the public schools, the Northfield Academy, also the Thetford (Vt.) Academy and Black River Academy, Ludlow, Vt. He entered the University in 1860, taking a special course in Military Drill and Tactics, remaining until 1861.

On the breaking out of the Civil War, he offered his services to the State, and was commissioned 1st lieutenant Company F, 1st Vermont Infantry; was mustered out of service, August 15, 1861; was promoted captain 13th U.S. Infantry, August 5, 1861; transferred to the 22d United States Infantry, September 21, 1866; major, 16th United States Infantry, March 4, 1879; was brevetted major, U. S. A., July 4, 1863, for "gallant and meritorious service at the siege of Vicksburg, Miss."

He was an officer of kind and generous impulses; one who loved his profession and striving to do his best in it; was ever conscientious and energetic in the discharge of any duty that might be devolved upon him.