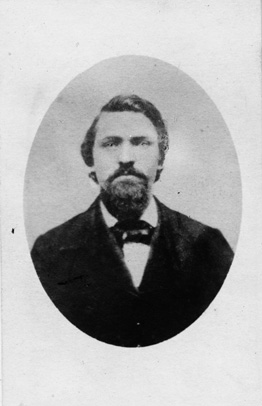 Your historian has found it difficult to procure details of the early life of Captain White. Comrade H. H. Stevens has secured for him after careful inquiry the following: He was born in Richford, Vt., had few advantages for schooling in his boyhood, - learned the trade of a blacksmith and set up a shop in Enosburg. People speak of him as a good blacksmith - and "like other boys of his stamp." He married a Banister girl of Richford. by whom he had two daughters. These survive him. His widow has never married. His daughters, both married. All have left Enosburg, and our informant could not ascertain what has become of them. When the call came for 300,000 nine months' men. White was ready to leave his trade and bid good bye to his family and iight for his country. He was the first man to enli.st in Enosburg and by his example and counsel did much to induce others to enlist. When in a public meeting volunteers were being called for and "some one from West Enosburg said, the first one to enlist would command the company. White walked right up and put his name down." For the above reasons doubtless, the Enosburg quota felt bound to nominate him for the office of captain, though older and abler men remained in the ranks. It should be said of him he was kind hearted, patriotic and tried to be a good officer, and thoughtful of his men, but he lacked some of the qualities necessary to one in command, while he could not do his best, because he felt his company did not respect him as their Captain. When death entered our ranks and Homer Fletcher was called home, he showed his thoughtful kindness by making the arrangements necessary for the funeral, and went to Washington to arrange for sending the body home. Soon after while the regiment was at Camp Vermont he sickened and was taken to the hospital. When the regiment left that camp, Captain White was left behind, and Comrade Ward Piper was detailed to care for him. In a few days he died, December 13th, 1862. The same services were rendered him that he rendered to Fletcher. His remains were sent home, and now repose in the cemetery at West Enosburg.

The nurse who attended him in his last sickness, paid this tribute to his memory: "In justice to Captain White let me say that while he may not have been all that was desired as a company commander, he impressed me as a man who had a very kind heart." Surely he died for his country as truly as his successor Captain Williams who fell mortally wounded on the battlefield of Gettysburg July 2nd, 1863.