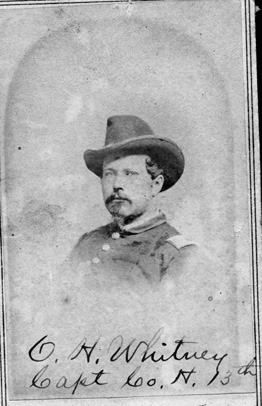 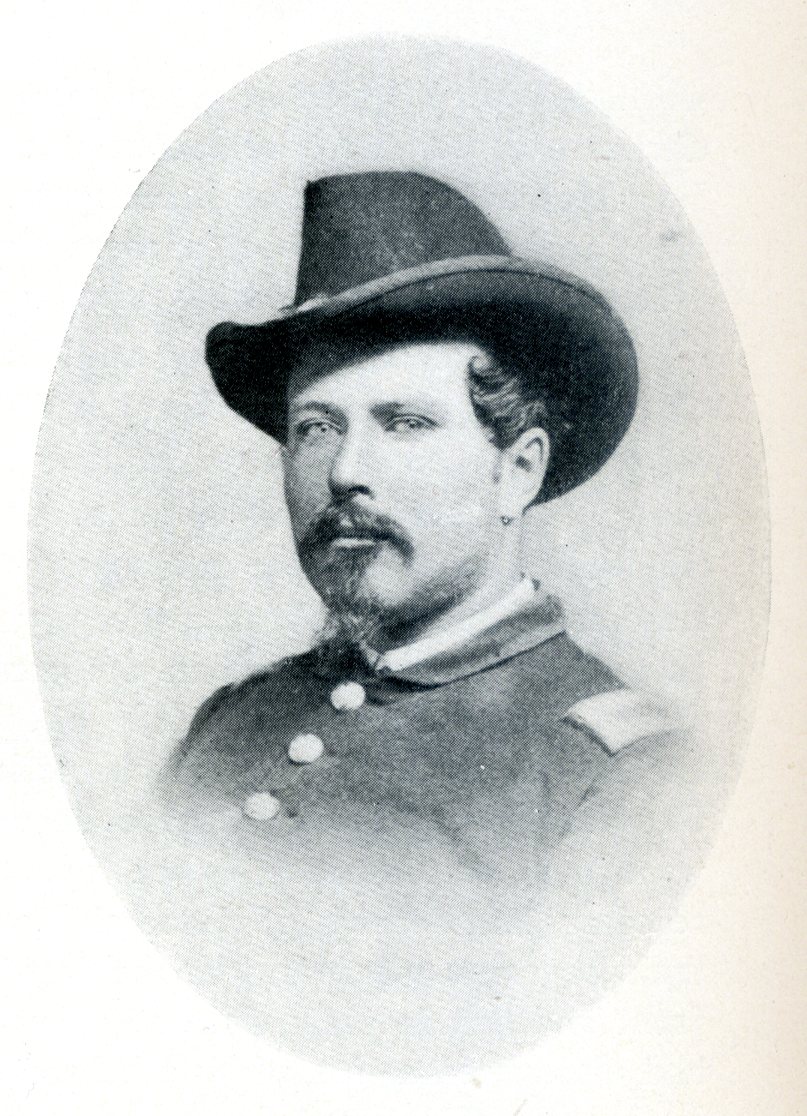 ORLOFF H. WHITNEY volunteered under the call of August 4th for 300,000 nine months' men. He was born in the town of Franklin April 19th, 1839, and therefore at the date of enrollment, August, 1862, was 23 years old. He counted on the quota of his native town and joined Highgate Company, so-called, September 11th, 1862, the date of organization. Was appointed Sergeant and at once took his place as such, and was active in giving instruction to the green and awkward squads of this company. Sergeant Whitney had experience, having enlisted into Company C, the Ransom Guards of St. Albans, Vt., under the first call of President Lincoln for 75,000 to serve three months. Mustered in May 2nd, 1861 and mustered out August 15th, 1861. Had a good common school education and was an intelligent, fine appearing, good looking, enthusiastic, patriotic young man as could be found in Vermont. Was well born and brought up. Comrade Whitney as a true man, loyal to his engagements, soon after being mustered out on the expiration of his first term of service, married on the 7th day of February, 1862, Cordelia C. Whitney of Franklin, one of the fair and most estimable young ladies of Northern Vermont. To them was born one lovely daughter, January 23rd, 1863, while the husband and father was in the service of his country. Sergeant Whitney attended the organization of the 13th Regiment at Montpelier, Vt.. September 24th, and was appointed Adjutant, in which capacity he served with credit. He was commissioned as Captain of Company H, January 22nd, 1863, an unusual though proper recognition of first-class qualification to command a company. Captain Whitney was prepossessing, ambitious, full of life and push, zealous in the discharge of duty, anxious for a clean service and to accomplish deeds of valor that the goal of victory and success might be reached as soon as possible.

His appearance on dress parade as adjutant commanded the admiration of the whole regiment, and his military bearing and fitness pointed to him for early promotion, and none were surprised when it was made known he had been commissioned as Captain and assigned to Company H. This position he filled with credit and satisfaction to the company, no officer of the Line was more popular, and in fact none gave better promise of sufficient courage and prowess than Captain Whitney. He was untiring in the preparation of his company for the spring campaign and impending battle between the army of the Potomac and Northern Virginia. During the last days of May, 1863, when everything seemed hopeful and propitious, and Captain Whitney was anxiously waiting for and momentarily expecting a clash of arms he was quite suddenly stricken down with typhoid fever. His case from the first was serious and alarming. That he might be more sure of the best of care, was taken to Alexandria, Va., and placed in one of the many hospitals. Was delirious from the first and Surgeon Nichols was very anxious. He was placed in a hospital of good standing and yet in an unguarded moment jumped from an open window to the street below, resulting in death. This was sad in the extreme. Here was a case of gross negligence by those in charge. What a pity that one so brave and anxious to serve his country and help save the Union should be deprived of life under such deplorable circumstances. True it is, however that this noble and patriotic soldier of the Republic offered and gave up his young life on the altar of his country as fully as if shot on the battlefield. His surviving comrades were fully satisfied that the death of Captain Whitney was the result of negligence and no investigation would restore to life or in any manner appease the grief and just indignation of his comrades and friends. Captain Whitney was buried in his native town, where once a year on Memorial Day the heroes of the Republic and wife and daughter and dear friends gather to garland the resting place of the sacred dead with the early flowers of spring and unfold above his grave the Stars and Stripes he volunteered to defend. The widow of this Green Mountain Boy resides with her only child, the wife of Olln Merrill, Enosburg Falls, Vt., Jan. 1909. (See page 316 for picture.) R. O. S.

ORLOFF H. WHITNEY volunteered August 25th, 1862, and on the organization of Company K was made fifth sergeant, in which capacity he served only a few days, for on the organization of the Thirteenth Regiment, September 24th, was made adjutant, and therefore his career as a soldier with the regiment was as adjutant of the regiment and captain of Company H. On account of his many duties Company K boys saw him but a little, only in his official positions, and yet we always claimed him as one of our company. His age when enrolled in Company K was 23 years, five feet and nine inches high, occupation a farmer, and married, born in Franklin, Vt., in 1839. He was of a good family, well brought up, and had a good common school education. He was intelligent and prepossessing, ambitious, and full of life and push, zealous in the discharge of duty, anxious for active service to test courage and accomplish deeds of valor that the goal might be reached as soon as possible. His appearance on dress parade commanded the admiration of the whole regiment, and his military bearing and fitness pointed him out quite early for promotion, and he was commissioned captain of Company H, January, 1863, which position he filled with ability and satisfaction, no officer of the line was more popular. His premature and untimely death fell like a pall over the whole regiment. He was prostrated with typhoid fever in camp Widow Violet on the Occoquan, Virginia, and removed to Alexandria, Va., and placed in a hospital where the next day in an unguarded moment on account of negligence of nurse, as his comrades believe, and while in a raging fever, without knowing what he did jumped through an open window into the street below, and died in a few hours after, June 4th, 1863. This sad event was a great loss to the regiment, as well as to country, home and society. A picture of Adjutant Whitney and a valuable sketch will be found by reference to roster and page 316 of this book.