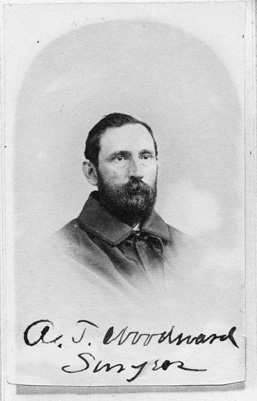 Dr. A. T. Woodward, father of Dr. Julius Hayden Woodward, was born at Castleton, Vermont, July 17, 1827. He graduated from Castleton Seminary in 1845, Castleton Medical College in 1847, the age of twenty years. He has thus at the present time been in the active practice of medicine more than fifty-five years. Not unlike his father, he was for many years a leading surgeon of the state, and his clientele also extended all over northern New York as well. He was for four years located at Whitehall, New York. He was later connected with the Albany Hospital, and at the same time held the chair as demonstrator of anatomy in the Albany Medical College. He was subsequently professor of obstetrics and diseases of women and children in the Castleton Medical College, until he removed to Brandon in 1860. He has been engaged in private practice at that place since that time. During this time he was for several years professor of surgical diseases of women in the University of Vermont, and consulting surgeon at the Mary Fletcher Hospital at Burlington. He was surgeon of the Fourteenth Regiment, Vermont Volunteers, in the Civil war, and saw service at the battle of Gettysburg, Spotsylvania Court House and the Wilderness. He was part of the time a member of the state examining board of volunteer surgeons.

Dr. Woodward married Miss Martha Chapin, of Whitehall, New York, and they became the parents of two children, both of whom are deceased. His wife dying in 1853, at the age of twenty-six years, he married for his second wife Lois C. June, a daughter of Milton June, of Brandon, Vermont. Of this union were born two children: Julius Hayden; and Irving, who died at the age of nine years.

Dr. A. T. Woodward, a Widely Known Practitioner, Is Dead.

Dr. Adrian Theodore Woodward, aged 80 years, died at his residence here yesterday. He was born in Castleton July 17, 1827, the son of Dr. Theodore Woodward, who was one of the founders of and the professor of surgery in the Castleton Medical College. Dr. Adrian Woodward was graduated in medicine from that institution in 1847 and began the practice of his profession in Whitehall, N.Y. In 1861 he moved to Castleton. In 1864, he was elected to membership in the corporation of the Castleton medical school which place he held until the outbreak of the Civil War. In 1860 he moved to Brandon and in 1863 he was commissioned surgeon of the 14th Vermont volunteers. He was operating surgeon at the battle of Gettysburg and at Spottsylvania. For a number of years, he occupied the chair on the surgical diseases of women in the medical department of the University of Vermont and resigned that chair owing to ill health in 1899. He was a Mason, an Odd Fellow, a member of the G.A.R. and of the Loyal Legion. He had been president of the Vermont State Medical society and of the Rutland County Medical and Surgical society. In 1867, Middlebury College conferred the degree of A. M. upon him. He is survived by one son, Dr. J. Hayden Woodward of New York city. For the accommodation of his many friends and the various organizations of which he is a member, his funeral will be held in the Episcopal Church Saturday afternoon at two o'clock. It will be a Masonic funeral.